Click through all of our Nurse Shark images in the gallery. 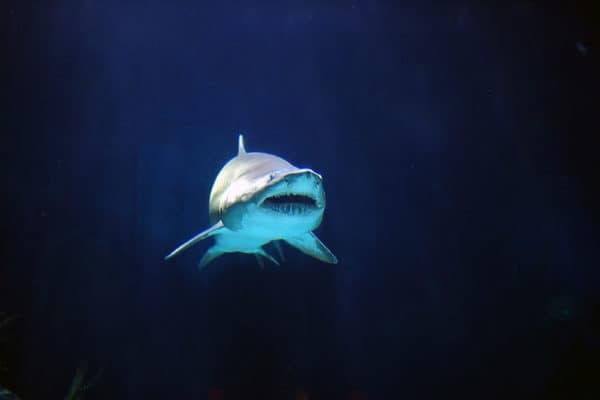 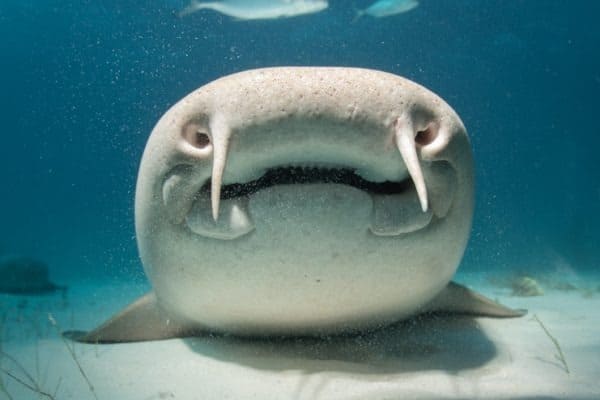 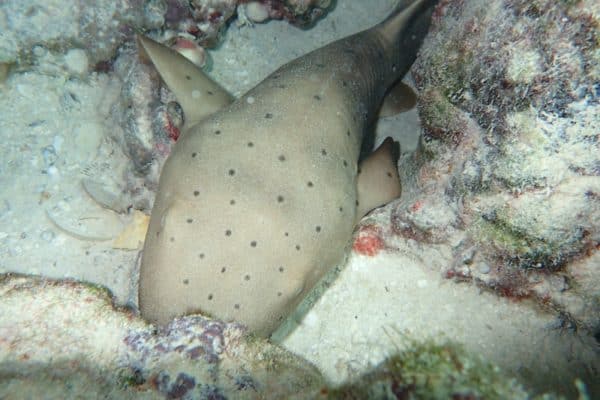 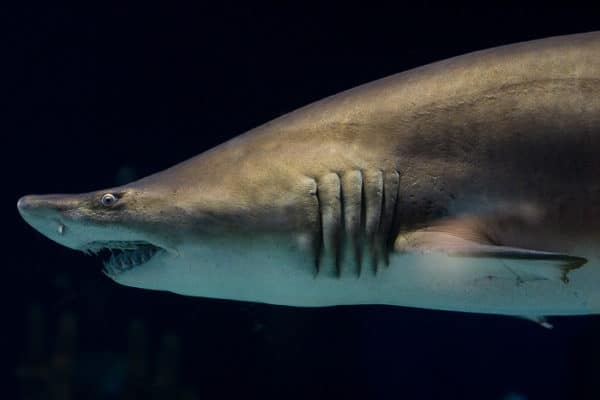 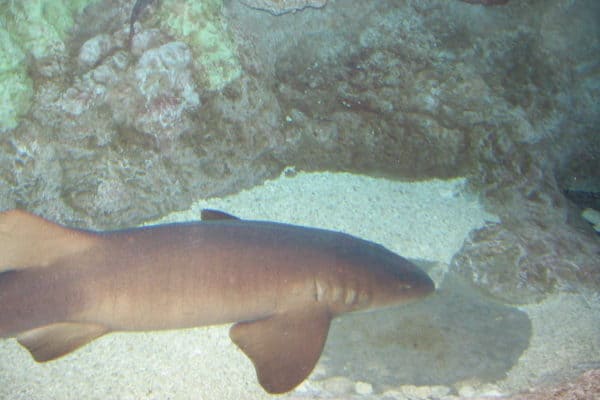 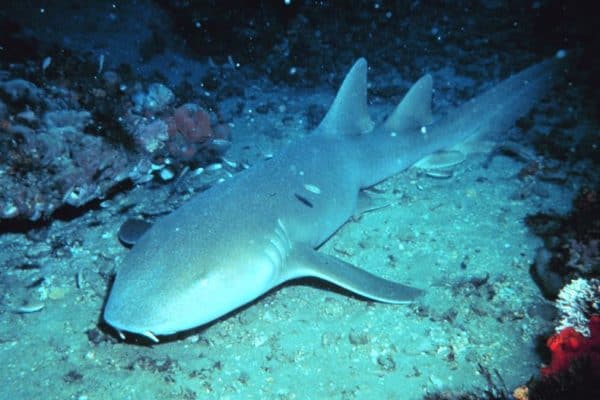 View all of the Nurse Shark images!

“Nurse sharks have smoother skin than most sharks. It feels like sandpaper.”

Sometimes called the couch potatoes of the sea, nurse sharks are large, peaceful fish that slowly drift along the bottom of the ocean in shallow water, sucking up food as they go. They hunt alone at night but return to the same comfortable resting place during the day where they enjoy dozing in piles. Although their habitat is alongside humans, these fish are rarely harmful; they will only bite if startled or provoked. These gentle sharks are quite comfortable in zoo aquariums and can live up to 25 years in captivity.

The nurse shark is in the Ginglymostomatidae family and the Chondrichthyes class. Its scientific name, Ginglymostoma cirratum, is a mix of Greek and Latin and means “curled, hinged mouth.” This name is rather fitting because this shark always looks like he’s puckering up. Since this species of shark prefers to stay close to the ocean floor, many scientists believe its name came from the Old English word “hurse,” which means sea-floor shark.

The nurse shark has a wide body and a short snout with a small, rectangular mouth. They have two sensory organs called barbels that grow down from their upper lip. These barbels help them find small fish and crabs hiding in the sand.

This species of sharks look a bit different than many of their more dangerous cousins. Their thick skin is smoother than most other sharks, and their dorsal fin is rounded rather than the customary sharp dorsal fin that is commonly associated with other species. Their color sets them apart from the others as well — they are tawny brown rather than grey.

These sharks grow to about 7.5 to 9 feet long and weigh between 150 and 300 pounds. The largest nurse shark on record to date is 14 feet long, which is more than two times longer than the average man is tall. Unlike more dangerous shark species, their dorsal fins are rounded rather than sharp. They also have long tails, which can make up about a quarter of their total length.

The nurse shark is a solitary, nocturnal hunter, but if you see one during the day, it will probably be resting in a pile of other similarly sized sharks. These sharks don’t migrate; when they finish hunting for the night, they will return to their favorite cave or coral reef to rest.

Nurse sharks like warm, shallow water and can be found all across the eastern part of the Pacific Ocean and the western part of the Atlantic Ocean. They live in close proximity to human activity and, while they are not usually aggressive, can bite in self-defense if humans encroach on their territory.

There’s no record of the nurse shark population worldwide, though their numbers have been reduced in certain areas due to previous overfishing for their skin and oil. Since humans no longer routinely hunt these sharks, the species as a whole is thriving and nowhere near extinction.

Small fish, shellfish, shrimp and squid are some of the nurse shark’s favorite foods, though they will also eat algae and coral from time to time. Since they hunt at night, it is believed that they eat fish that are resting, making those fish slow enough to be easy prey.

The nurse shark isn’t hunted regularly by any specific predators, but it can make an easy meal for larger fish such as tiger sharks or lemon sharks. This species of shark is not a threatened or endangered species.

When a nurse shark wants to mate, the male will bite the female’s pectoral fin to hold her in place for the mating process. Studies have shown that this species is unique in its reproductive process compared to other sharks because more than one male can fertilize the same litter.

This species of sharks is ovoviviparous, meaning that the female carries the fertilized eggs inside her to incubate. When the 6-month incubation period comes to an end, she gives birth to a litter of about 25 live pups. These pups are roughly 8-12 inches in length when they are born. After giving birth, it takes the female 18 months to produce eggs and go through the reproductive cycle again.

Nurse sharks do well in captivity, possibly because they are less active than other shark species. Since they don’t need to stay swimming to breathe, they are less bothered by smaller living spaces than their more active cousins. The average lifespan for a nurse shark in captivity is up to 25 years.

Is it safe to swim with nurse sharks?

Swimming with nurse sharks is relatively safe, but that doesn’t mean there’s no risk involved at all. Even though these slow-moving sharks are docile, you must remember that they are still wild animals and may attack if they feel threatened.

Can I pet a nurse shark?

This species of shark is usually harmless to humans, but that doesn’t mean you should try to pet them. Their mouths are small, but if you startle or step on one, they will use their sharp, serrated teeth to defend themselves.

Has a nurse shark ever killed a human?

Though their teeth are sharp and can do some damage, there is no record of a nurse shark attack resulting in the death of a human. These sharks are mostly docile and will only bite if provoked.

Yes, nurse sharks are carnivores. Their diet consists of small fish, shellfish and squids. Though a fisherman will occasionally find algae in their stomachs, scientists believe the sharks simply suck the algae up alongside their prey rather than intending it to be a source of food.

No, nurse sharks are not blind, but there are two species in the carpet shark order who are. All carpet sharks have similar features, so it is easy to mistake one species for another.

What Kingdom do Nurse Sharks belong to?

What class do Nurse Sharks belong to?

What phylum to Nurse Sharks belong to?

What family do Nurse Sharks belong to?

What order do Nurse Sharks belong to?

What type of covering do Nurse Sharks have?

What genus do Nurse Sharks belong to?

In what type of habitat do Nurse Sharks live?

What is the main prey for Nurse Sharks?

What are some predators of Nurse Sharks?

How many babies do Nurse Sharks have?

The average number of babies a Nurse Shark has is 20.

What is an interesting fact about Nurse Sharks?

What is the scientific name for the Nurse Shark?

The scientific name for the Nurse Shark is Ginglymostoma cirratum.

How fast is a Nurse Shark?

A Nurse Shark can travel at speeds of up to 25 miles per hour.