Click through all of our Bull Shark images in the gallery. 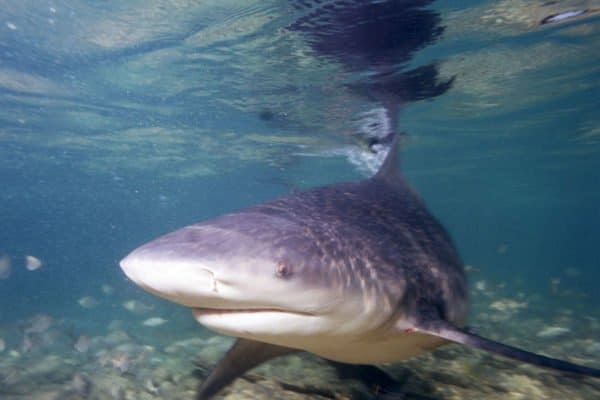 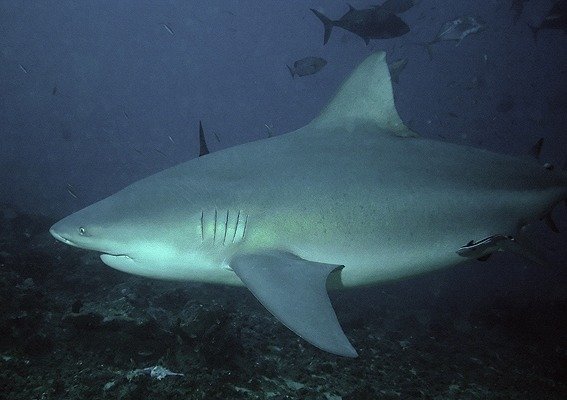 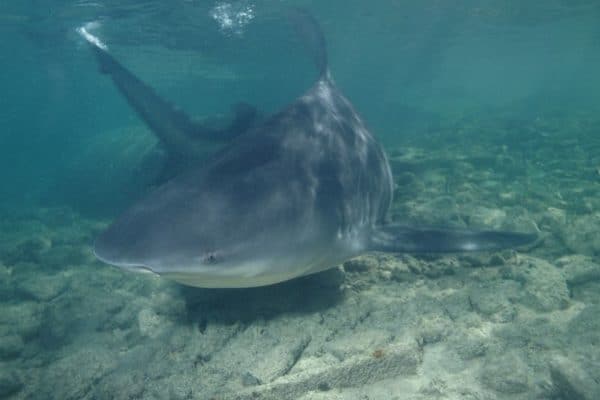 View all of the Bull Shark images!

Sharks that can live in freshwater

Bull sharks get their name from the short, blunt shape of their snouts and their aggressive behavior. They also usually butt prey with their heads before attacking. These sharks are found in warm coastal waters less than 100 feet (30 m) deep, but they can swim far up freshwater rivers and live in freshwater lakes if they choose. They are the third most dangerous sharks towards people, just behind the great white shark and the tiger shark. Their overall shape is large and stocky, with heavy, rounded bodies.

• They turn up in unexpected places: In 2010 they were seen swimming the flooded streets of Brisbane, Australia.

• They are athletic: They have been seen leaping up waterfalls like salmon to reach inland lakes.

• Some are migratory: In the Amazon bull sharks migrate seasonally up and down the Amazon River.

The bull shark’s scientific name is Carcharhinus leucas. The word “Carcharhinus” means sharp-nosed, because most sharks in this family, like the tiger shark, have very pointed noses. Bull sharks are an exception to this, as they have short, rounded, blunt noses. The word “leucas” is derived from the Greek word “leucos,” which means white, and describes the bull shark’s underside.

Bull sharks have large, heavy bodies that appear very round. Their snouts are short and blunt. They have large dorsal fins on their backs, but they do not have an interdorsal ridge running down their backs as other sharks do. They are grey on top with white undersides. Young bull sharks often have dark tips on their fins. Bull shark teeth are big and triangular, with serrated edges similar to the cutting edge of a saw.

Bull shark size is typically up to 11 feet (3.5m) long, which is about the same as two large refrigerators stacked one on top of the other. They weigh between 500 pounds (230kg), about half the weight of the average horse. They can get bigger, though. The largest bull shark ever recorded was 13 feet (4.0m), and the heaviest on record was 694 pounds (315kg). Females are bigger than males of the same age.

The top swimming speed of a bull shark is 25 miles per hour (40 km/h). For comparison, the fastest swimmer on record, with 28 Olympic medals to his credit, is Michael Phelps. Even in a special outfit that allowed him to beat his Olympic records, he was only able to swim at 8.8 MPH (14.16 km/h), far slower than a shark.

Bull sharks are solitary hunters most of the time, though they do sometimes team up with other bull sharks to make hunting easier. A group of sharks is usually called a school, but may also be called a shoal. These sharks are known to be very aggressive and have been known to attack people and other sharks without any provocation.

The bull shark can be found around the world, anywhere where there are warm, shallow, coastal waters. They also live in many rivers around the world at least part-time. They’ve been found in the Amazon River in South America, the Mississippi River in the United States, the Brisbane River in Australia, the Tigris River in the Middle East, and the Ganges River in India. They also live at least part-time in various freshwater lakes, including Lake Nicaragua in Nicaragua and Lake Pontchartrain in Louisiana.

Some bull sharks migrate each year, such as those in the Amazon River that swim seasonally over 2300 miles (3701 km) each way up and down the river. Since bull sharks give birth to their babies in freshwater rivers, it is common for females to migrate when they are ready to have their babies.

Bull sharks are carnivores, meaning their diet is made up of meat, including fish. They are opportunistic feeders, which means that they eat just about anything they find, and they aren’t picky about their food. Their main diet consists of fish, dolphins, sea turtles, rays, birds, and other sharks, including other bull sharks.

How much they eat depends on what is available. If food is plentiful, they will eat as much as they can. If food is scarce, bull sharks can go long periods without eating. When this happens, their digestion slows down to make the food last longer and allow them to avoid starvation. It is not known just how much a bull shark needs to eat.

Adult bull sharks are not generally preyed upon by anything that lives in the ocean. That makes them what is called an “apex predator,” which is an animal that is at the top of the food chain. Juvenile bull sharks are sometimes eaten by other sharks, including adult bull sharks. Bull sharks have been seen being attacked and killed by crocodiles in rivers in both Australia and South Africa.

The main threat to bull sharks is humans. They are hunted by people for their oil, hide, and meat. The numbers of bull sharks appear to be shrinking, and at least one study has found that bull sharks are not growing as large as they used to, most likely due to the bigger ones being killed.

Bull sharks are not currently considered as an endangered species, but their status is listed as near threatened (NT) by the International Union for Conservation of Nature. This means that they could soon become a threatened species if steps aren’t taken to protect and preserve them.

Not much is known about bull shark reproductive behavior. Scientists think that the male grabs the female by the tail and holds her until she rolls over, at which time mating can take place. Females often have scars and sores thought to be the result of such actions. This behavior is similar to reproductive behavior seen in other sharks.

Bull sharks become sexually mature at about 8 to 10 years of age. They come together for mating, but then they go their separate ways rather than remaining together for any length of time. They breed from late summer to early fall, often coming together in rivers or in the estuaries that lie between rivers and the ocean. Gestation lasts 10 to 11 months.

Babies, called pups, are born in fresh water, providing them protection from the many predators that live in the sea. The mother gives birth to anywhere from 1 to 13 live pups measuring about 2.5 feet (80 cm) in length.

Once born these babies are on their own. The mother does not provide any care for them after birth. The babies begin hunting for themselves immediately, eating small fish and crustaceans and anything else they can catch and swallow.

Bull sharks live an average of 16 years in the wild. It is possible for them to live longer, especially in an aquarium. The oldest bull shark known was 32 years old.

No exact count of the bull shark population exists. They are seen frequently throughout their habitat and appear to be plentiful. Despite this, it is important to have a plan for conserving them so that they don’t disappear. Currently no plan exists for their protection.

Bull sharks cannot survive by eating plants because their bodies cannot digest them. This means they are not herbivores or omnivores. Bull sharks are carnivores. They live exclusively on a diet of other animals. They will eat anything they can catch, including fish, sea mammals, birds, and other sharks. They also eat dead or rotting animals when they encounter them, including dead whales and dead sharks.When they are in rivers or lakes bull sharks sometimes grab animals that come to the water to drink. They catch birds by swimming up under seabirds resting on the surface of the water or fishing to feed themselves or their young.

What is the difference between a bull shark vs a bullhead shark?

Bull sharks are one of the most dangerous shark species to humans. They rank in the top three for attacks on people, along with the great white shark and the tiger shark. Bull sharks are known to be responsible for 104 attacks on humans during the last 150 years. Of these attacks, 33 have been fatal.Because bull sharks live in the same areas that attract people, they have more opportunities to attack. They hunt in murky water, making it hard to see their prey. Bull sharks have small eyes as compared to other shark species and hunt mostly by smell. This increases the likelihood that they will attack a human by mistake, thinking it is a prey animal.Bull sharks are easily provoked and respond to intrusion on their territory with a sudden attack. The fact that their territory overlaps with places humans like to swim and play in the water makes it more likely that an attack will occur.While it is true that these sharks are aggressive, experts feel that bull sharks do not seek out humans, but will attack them in many situations. Bull sharks have not only attacked humans in the ocean, but they have also attacked people swimming in freshwater rivers and lakes far from any saltwater, places where the swimmers felt safe from sharks.


What Kingdom do Bull Sharks belong to?

What phylum do Bull Sharks belong to?

What class do Bull Sharks belong to?

What family do Bull Sharks belong to?

What order do Bull Sharks belong to?

What genus do Bull Sharks belong to?

What type of covering do Bull Sharks have?

Bull Sharks are covered in Scales.

In what type of habitat do Bull Sharks live?

What is the main prey for Bull Sharks?

What are some predators of Bull Sharks?

Predators of Bull Sharks include humans and tiger sharks.

What are some distinguishing features of Bull Sharks?

How many babies do Bull Sharks have?

The average number of babies a Bull Shark has is 10.

What is an interesting fact about Bull Sharks?

Bull Sharks have an unpredictable and aggressive temperament!

What is the scientific name for the Bull Shark?

The scientific name for the Bull Shark is Carcharhinus Leucas.

What is the lifespan of a Bull Shark?

What is the lifespan of a Bull Shark?

How fast is a Bull Shark?

A Bull Shark can travel at speeds of up to 25 miles per hour.