The fourth biggest species of shark in the world! Click through all of our Tiger Shark images in the gallery. 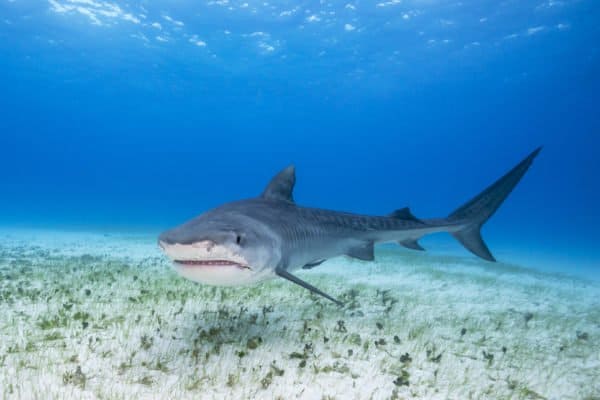 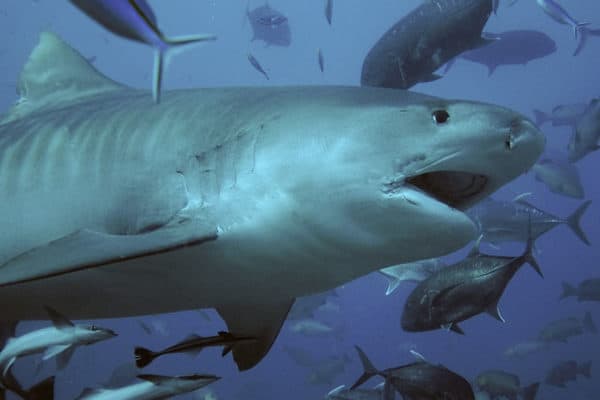 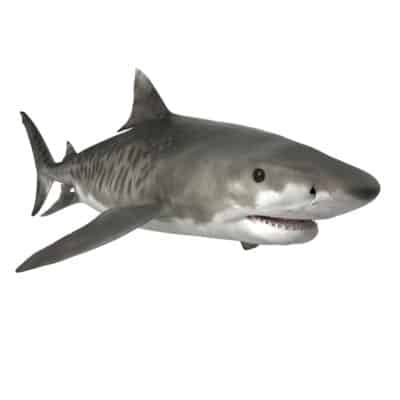 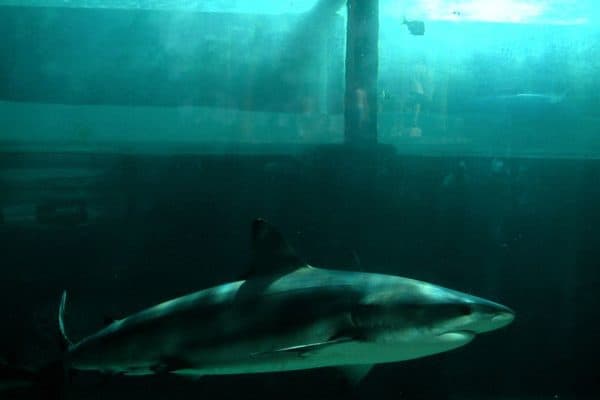 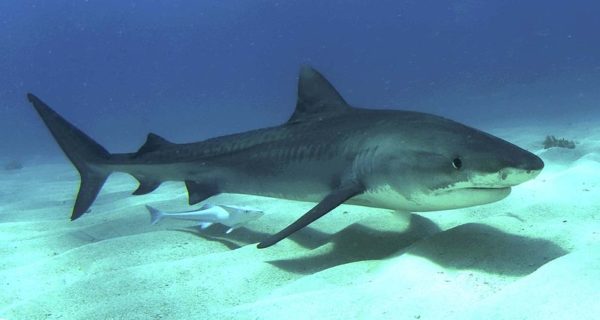 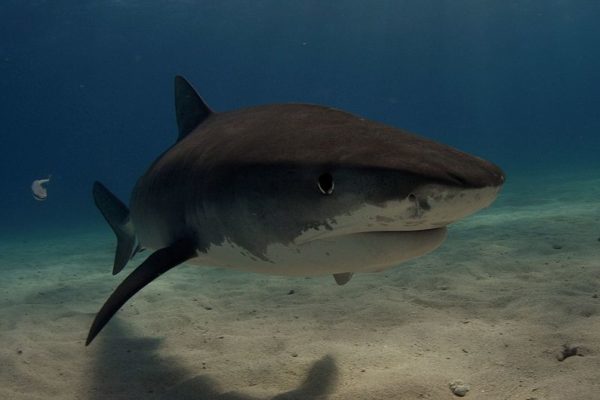 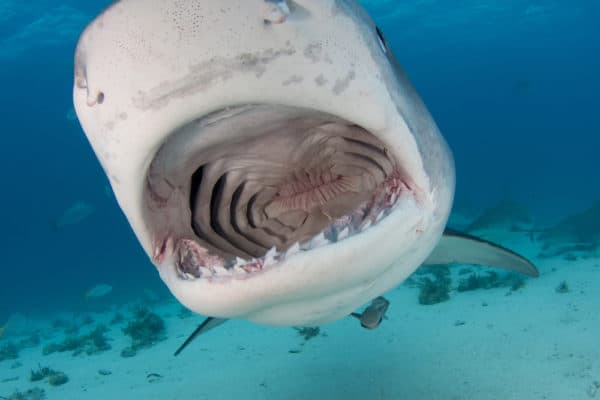 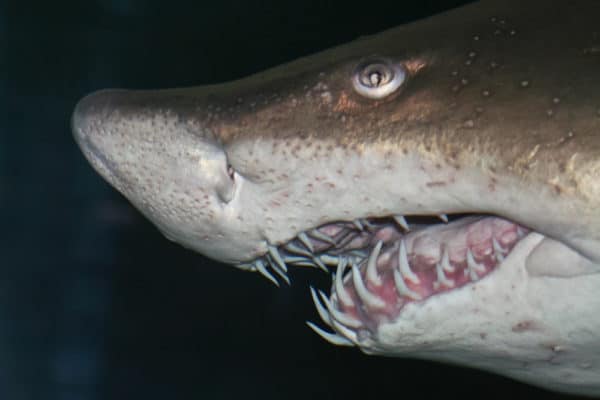 View all of the Tiger Shark images!

The tiger shark, also known as a leopard shark, maneater shark and spotted shark, is a warm, saltwater fish living in various areas throughout the world.

This is the only member of the Galeocerdo genus. It is known for the vertical dark stripes on its back and the fact that it eats many types of prey. It’s hunted by humans for its fins, cartilage, and oil.

• A large litter: A female can have from 10 to 82 babies in one litter. Not surprisingly, she only has one litter of babies every three years.
• Speedy hunters: Though tiger sharks are fish that move slowly through the water most of the time, they use quick bursts of speed to capture prey. They can swim at a speed of around 20mph.
• Few predators: Killer whales and humans are its only predators. They are sometimes caught in commercial fishermen’s nets either deliberately or by accident.
• Garbage fish: Tiger sharks are sometimes referred to as garbage fish because they swallow a lot of items besides their prey. Plastic, empty cans and license plates are just some of the items that have been found in a tiger shark’s stomach.
• Powerful teeth: A tiger shark’s teeth are so strong and powerful they can bite through a sea turtle’s shell or a clam.

The scientific name of the tiger shark is Galeocerdo cuvier. Galeocerdo cuvier comes from the Greek words Galeus (shark) and cerdo (fox). This relates to the sneaky way it approaches its prey. It’s also known as the maneater shark, leopard shark and spotted shark. It belongs to the Carcharhinidae family that contains 60 species. Its class is Chondrichthyes.

It belongs to the order Carcharhiniformes along with 270 other species of sharks including the Blacktip Reef Shark, Bull Shark and Gray Reef Shark among many others. However, this species is the only member of the genus, Galeocerdo.

There are 60 species of shark that belong to the same family (Carcharhinidae) also known as requiem sharks. There are 12 genera of this family. Some notable members of the requiem family include:

• Blacktip Reef Shark: Living in warm water this shark is easy to recognize by the black tips on its dorsal and other fins. This shark swims in shallow areas and is curious, but not aggressive when it encounters humans.
• Bull Shark: This shark lives in warm coastal waters and in rivers. They eat much of the same prey as tiger sharks, but hunt during the day as well as at night.
• Gray Reef Shark: Has a blunt nose like a tiger shark and lives in warm waters gathering around reefs to find prey. This shark at around 6 feet long and weighing around 70lbs is much smaller in size than the tiger shark.

A tiger shark is a fish with smooth, gray skin, a white underside and dark gray or black vertical stripes on its back. Its nose is rounded and wide. The teeth are curved toward the inside of its mouth. In addition, each of its teeth has a serrated edge. The design of their teeth helps them to bite through shells and the other hard exteriors of prey.

Its gray color helps it to blend into the murky water. Not surprisingly, this can also help a tiger shark to sneak up on prey swimming in the same area.

One of the most notable features is the stripes on its back. As it grows older, its stripes begin to fade.

The tiger shark lives in tropical waters in many places throughout the world. They are saltwater fish that have been seen around the central Pacific islands, in the Gulf of Mexico off North America and the Caribbean Sea. They have been seen off the coast of South America, China, Australia, Indonesia, Africa, and India. Though this shark spends time swimming near the surface, it normally swims at a depth of around 460 feet.

These sharks migrate with the change of seasons. When the weather turns cold, they move from temperate waters to tropical waters. Alternatively, when the warm weather returns, they move from a tropical habitat to a temperate one.

There is a lack of data regarding the population of this creature. However, the official conservation status is Near Threatened. Its numbers are decreasing due to poaching. They are hunted for their fins, their skin, and the oil contained in their liver. They are often caught in commercial fishing nets.

A tiger shark has a long list of prey. Some of the things these sharks hunt include squid, sea turtles, dolphins, smaller sharks, clams, rays, and sea birds. This shark will swallow things it finds in the ocean including plastic, license plates and anything that looks tasty! They hunt at night which means they are even harder to see in the murky water.

In the northern hemisphere, the breeding season of this shark goes from March to May while the breeding season in the southern hemisphere goes from November through the beginning of January. After the male mates with the female, the babies develop in eggs inside of the mother. After a 13- to 16-month gestation period, the female gives live birth. She can have from 10 to 80 babies or pups. A female tiger shark has a litter of pups just once every three years.

Shark pups can be from 20 to 30 inches in size at birth. Each baby leaves its mother right away to live independently. These sharks reach sexual maturity at about 7 to 10 years old. Tiger sharks live to be about 15 years old, but it seems they can live a lot longer — the oldest tiger shark on record was 50 years old!

Tiger Shark in Fishing and Cooking

This shark is not one that many humans eat. Its meat is said to have a strange taste. Plus, this fish ingests lots of different items both edible and non-edible. This makes them even less appetizing.

Where are tiger sharks found?

What do tiger sharks eat?

Where do tiger sharks live?

Tiger sharks tend to swim along coasts, in river estuaries and harbors. They look for murky water where they can blend in and capture prey.

How big is a tiger shark?

What is the tiger shark’s scientific name?

Their scientific name is Galeocerdo cuvier.

Yes, they can be. These sharks are curious and can be dangerous when they mistake a human for prey. When these sharks see movement or reflections, they go over to investigate thinking it’s something to eat.

Harbors, river estuaries and reefs are the habitat of tiger sharks. Many people like to dive in these areas, so it’s not surprising tiger sharks and humans sometimes encounter each other.

What Kingdom do Tiger Sharks belong to?

What phylum do Tiger Sharks belong to?

What class do Tiger Sharks belong to?

What family do Tiger Sharks belong to?

What order do Tiger Sharks belong to?

What genus do Tiger Sharks belong to?

What type of covering do Tiger Sharks have?

What are some predators of Tiger Sharks?

Predators of Tiger Sharks include humans.

How many babies do Tiger Sharks have?

The average number of babies a Tiger Shark has is 35.

What is an interesting fact about Tiger Sharks?

The Tiger Shark is the fourth biggest species of shark in the world!

What is the lifespan of a Tiger Shark?

What is the lifespan of a Tiger Shark?

How fast is a Tiger Shark?

A Tiger Shark can travel at speeds of up to 20 miles per hour.