Starfish, also known as sea stars, are incredibly unique and bizarre invertebrate animals that have an almost alien-like appearance. They are part of a group of animals known as echinoderms, which notably have radial symmetry rather than bilateral symmetry like most animals. The Echinodermata phylum also includes sea urchins, sea cucumbers, and sand dollars! One of the most common questions asked about these one-of-a-kind animals is “What do starfish eat?”

Furthermore, how do they find and eat their food, anyway? Finally, where is a starfish’s mouth? Read on as we answer the many questions you probably have about the enigmatic starfish, one of the most unusual and captivating animals to ever live in our planet’s vast seas.

How Do Starfish Eat?

Before we get into what sea stars eat, it helps to first understand their extraordinary biology and how they find and eat food.

Amazingly, starfish don’t digest their food inside of their bodies like most animals do. They actually are able to expel their entire stomachs through their mouths in a process known as eversion!

Starfish scoot along the sea floor by using hundreds of tiny structures called tube feet that are attached to the bottom of each of their arms. They fill these tiny “feet” with water and contract and relax them rapidly, which allows them to move surprisingly quickly from place to place (and, more importantly, towards their next meal!).

When a starfish finds something it wants to eat, it will quickly propel itself towards its prey and prepare itself for the eversion process.

A starfish’s mouth is actually located on the underside of its body, more specifically in the center where its limbs all meet. From this mouth, a starfish will extend its stomach and use it to completely envelop its prey, like a clam or a sea snail. Next, their stomach begins secreting digestive enzymes to break down the prey animal’s body, in turn making it easier to pull it back into the starfish’s mouth.

Finally, the starfish will pull its stomach back into its mouth with the prey animal trapped inside. The sea star then lets its many internal digestive glands finish the animal off. It’s a truly strange survival tactic, but it works perfectly for such a strange animal!

What Do Starfish Eat?

Now that you have a better understanding of how starfish use their bodies to move around and capture their prey, we can get into the many foods these unusual animals eat.

Of the roughly 2,000 species of starfish, nearly all of them are carnivorous. This means they feed primarily on the flesh of other animals living in the ocean.

A large portion of a typical starfish’s diet is composed of various species of shelled mollusks, which the starfish is able to break open with their powerful, suction-cupped feet. However, they are known to feed on lots of other small prey animals, too.

Here are the many animals starfish commonly eat:

Do Starfish Have Predators?

Starfish have a few helpful defense mechanisms that keep a lot of major predators away. Most notably, they have a very rough, bone-like exoskeleton that is unpalatable to many animals, and the suction cup-like structures on their feet make them very difficult to peel off of surfaces like rocks.

Despite these clever defenses, though, starfish have a wide range of predators that feed on them in the ocean. Here’s a list of animals that commonly eat starfish: 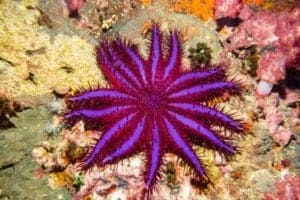 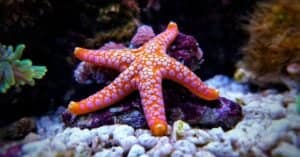 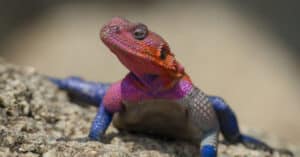 Could an Unarmed Human Beat a Lion? 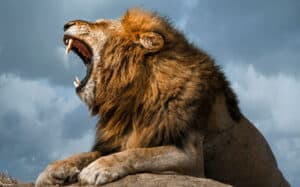