John Carnemolla/Shutterstock.com
Share this post on:
More Great Content:
Hippopotamus Teeth: Everything You Need to Know
Hippo Attacks: How Dangerous Are They to…
Discover How Congress Almost Filled the Mississippi…
What Do Hippos Eat?
What Is A Hippos Bite Force?
Baby Hippo: 5 Calf Pictures & 5…

The hippopotamus is a semiaquatic mammal. It is native to sub-Saharan Africa and is the largest land mammal in the world, weighing between 2,200 and 9,900 pounds. This equals 1 to 4.5 tonnes.

This mammal inhabits lakes, rivers, and mangrove swamps. The hippopotamus, alongside the pygmy hippopotamus (a small hippopotamid native to West Africa), is an extant species in the Hippopotamidae family.

Hippos are considered one of the most dangerous animal species worldwide. They are unpredictable and may become highly aggressive if someone trespasses into their habitat. Since spotting a hippopotamus is difficult and dangerous, we’re here to tell you some incredible facts about them that will make you feel like you’ve seen one in real life!

1. The hippopotamus is related to cetaceans

Now that’s something you surely didn’t know! Scientists think that the hippopotamus is the closest relative to cetaceans. Whales, porpoises, and dolphins are members of the suborder Cetacea. It is believed that they had a common ancestor around 55 million years ago.

2. The hippopotamus has an enormous head

At first glance, you might not notice how big the head of a hippopotamus is. But what if we told you that it makes up around 35% of the hippopotamus’ body weight? Each of its tusks weighs up to approximately 6.6 pounds. Even more, the mammal can open its mouth to 150 degrees.

3. The hippopotamus spends most of its life underwater

The hippopotamus does not sweat. You might be wondering how this is related to living underwater, right?! Here’s the connection: because it cannot sweat, the hippopotamus’ skin quickly becomes dry above the water. The body secretes an oily substance that keeps the skin moisturized, prevents sunburn, and has anti-bacterial properties.

Sometimes this substance is called “blood sweat” because it makes the hippo look reddish as if it’s covered in blood. But, as already mentioned, it’s neither sweat nor blood. This substance becomes red-orange a few minutes after secretion and, in the end, has a brown color. Despite this incredible plus, the hippopotamus still spends around 16 hours a day underwater and only gets out at dawn to look for food.

4. Hippos can neither swim nor breathe underwater

Although they spend most of their lives underwater, hippos can’t swim. They’re just galloping through the water. They have developed an automatic system of getting their heads above the water to breathe. Hippos surface above the water every four to five minutes to take a breath. They can do this even while sleeping – that’s how convenient their system is!

Young hippos can only hold their breath underwater for up to 5 minutes, so they resurface every four to five minutes.

5. The hippopotamus is one of the deadliest animals in the world

Around 500 people die every year in Africa because of hippopotamus bites. They are very aggressive and unpredictable, so people are advised to take great care if they somehow end up in an area close to hippos.

In 2014, twelve children and one adult were killed by a hippopotamus while crossing the Niger River on a boat. The hippo flipped the boat and killed everyone – crushing a human being is a piece of cake for its sharp teeth.

A study conducted at Arche Hospital in Burundi presents 11 cases of hippo bites that appeared over one year at the emergency department. While none of the patients died, most of them became permanently disabled. The study shows that a hippo bite should be treated as a significant trauma because it’s highly life-threatening.

6. Hippos eat more than 60 pounds of food a night

Hippos are large mammals, indeed. But to delight in 60 pounds of food a night? That’s a lot! That’s just how it is! After 16 hours underwater, they get out and start looking for food. They spend the remaining hours on land, eating fruits and plants.

While hippos are considered one of the most dangerous animal species on Earth, there are still some animals that can kill them.

Here are some of them:

However, such cases are rare and only happen if the hippopotamus is in a disadvantaged situation.

The hippopotamus is not a social animal and does not develop social bonds. An exception is the relationship between mothers and daughters.

Moreover, hippos do not usually have territorial behavior, meaning they’re not up to defending their territories as other animals do. The only one that may exhibit this type of behavior is the dominant bull, and only in the water.

9. The oldest hippo in the world lived 65 years

The hippopotamus has an average lifespan of 40 to 50 years. However, two known hippos in the world lived much beyond that number. The first one is Donna the hippo, who lived at the Mesker Park Zoo in Evansville, Indiana, United States. It died in 2012 when it was 61 years old.

The other oldest hippo lived in Manila Zoo, the Philippines, and was called Bertha. It had been living in the zoo since 1959 when it opened its doors. Bertha died in 2017 when she was around 65 years old.

10. The hippopotamus has a great significance in the worldwide culture

If you do some research, you’ll find that hippos are an essential cultural reference worldwide. For example, Egyptian mythology portrays the god Set as having the form of a red hippopotamus while fighting Horus.

The hippopotamus is also a central theme in African folktales.

Even though it hasn’t been as popular in Europe because it’s not a common animal on the continent, there’s still an iconic oil painting signed by Peter Paul Rubens’ called “The Hippopotamus and Crocodile Hunt.”

Hippos have essential roles in movies too:

T. S. Eliot wrote a famous poem in which the hippopotamus plays a pivotal role. It’s entitled “The Hippopotamus” and is a comparison between a hippopotamus and the Catholic Church. 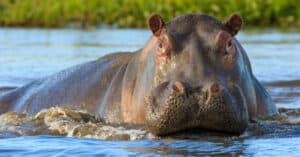 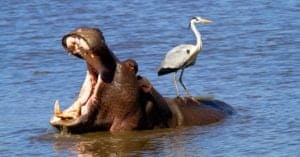 What Is A Hippos Bite Force?

What Is A Hippos Bite Force? 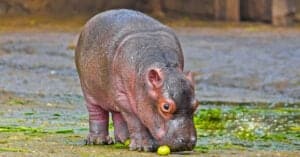