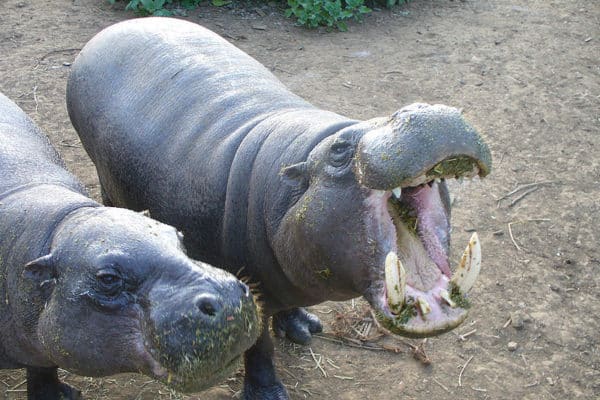 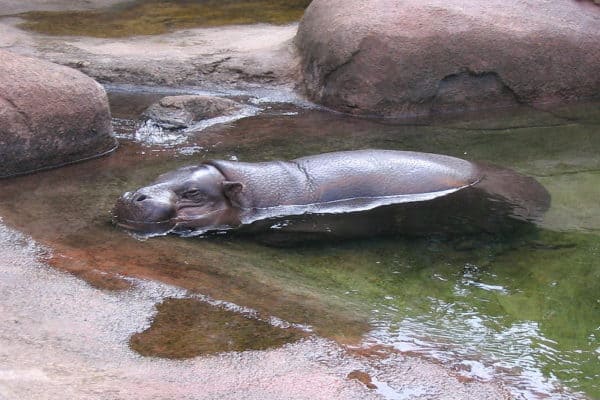 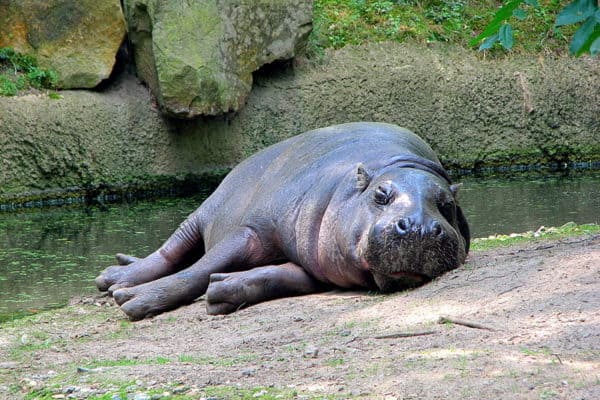 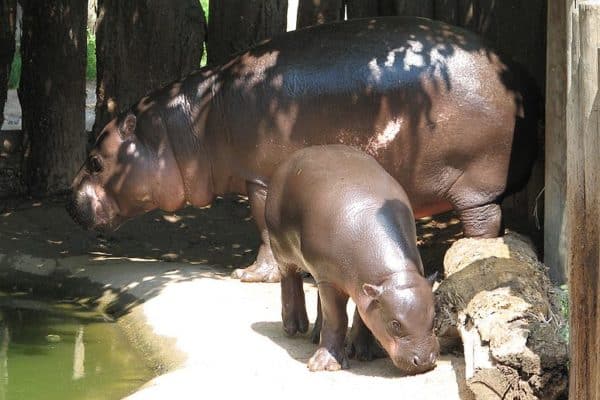 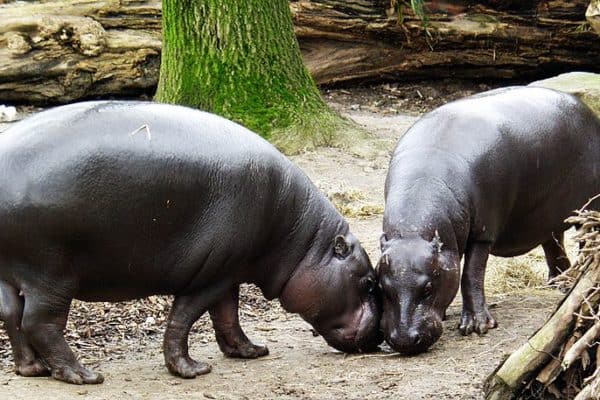 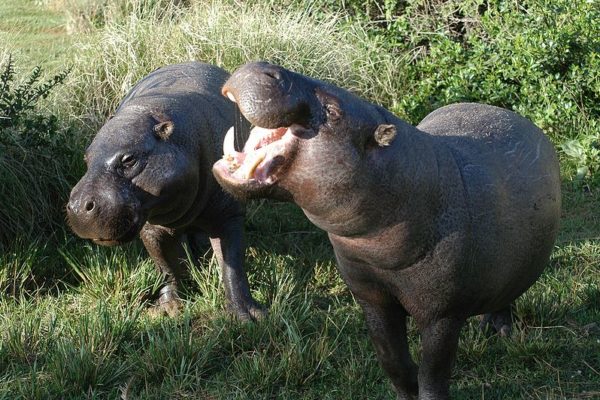 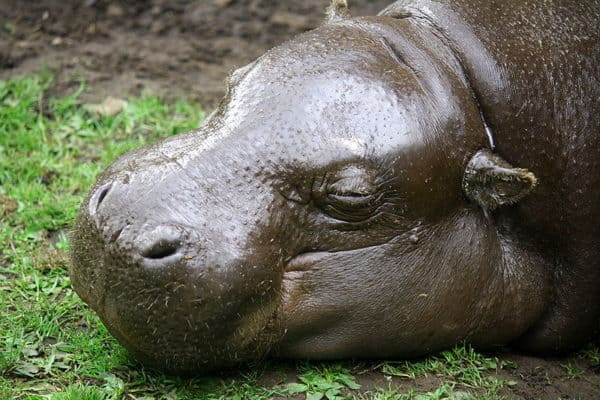 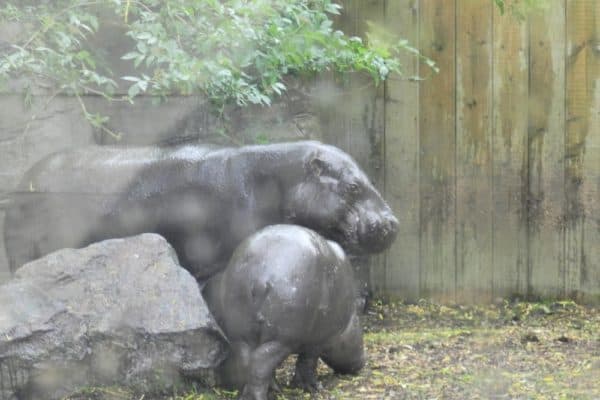 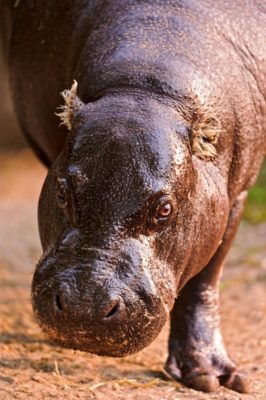 Spends more time on land than in water!

Unlike the larger and more sociable Common Hippopotamus, the Pygmy Hippopotamus does not live in herds and is in fact, largely solitary. Spending the hot days resting in the cool mud or in the burrow of another animal (such as an Otter) that it has enlarged, the Pygmy Hippopotamus spends comparatively little of its time in water and tends to use it more as a refuge if it feels threatened. The Pygmy Hippopotamus is nocturnal and forages in the forest at night for a wide variety of plant matter and fallen fruits. Like their larger cousin, the Pygmy Hippopotamus follows well-trodden and marked paths between its feeding and resting grounds and can dart through these tunnels at a remarkable pace if it feels in danger. Although Pygmy Hippopotamuses roam individual home ranges it is not uncommon for them to overlap those of others, and they are even known to tolerate the presence of other individuals in their territory.

During the breeding season is one of the main times when male Pygmy Hippopotamuses become more aggressive and will bare their teeth and even fight with one another to earn the right to mate with the local females. After a gestation period that lasts for between six and seven months, the female Pygmy Hippopotamus gives birth to a single calf either in a den in the dense vegetation or in the water. Pygmy Hippopotamus calves weigh just under 6kg at birth and are fully weaned by the time they are eight months old, after which they begin to accompany their mother on foraging trips in the forest. Pygmy Hippopotamuses are relatively long-living animals that often reach older ages than the average Common Hippopotamus, particularity when kept in captivity.

Due to the relatively large size of the Pygmy Hippopotamus it has few natural predators within its native forest habitats with the exception of occasionally being stalked by a Leopard. The smaller and more vulnerable calves however, are preyed up by a number of jungle predators including other Wildcats and large Snakes such as Pythons, that are able easily ambush the unprotected young calf whilst its mother is out foraging. The biggest threat to the remaining Pygmy Hippopotamus populations however is people, that have hunted them for their meat and have destroyed vast areas of their unique forest habitats. The often illegal deforestation of much of Africa's tropical rainforest is to provide rare, exotic woods for the timber industry and to clear land to make way for farming and agriculture.

Due to the way that the skin of the Pygmy Hippopotamus is made up, the animal cannot sweat so when it comes into contact with air their skin easily dries up. Although this is not a problem in the water, to combat this the rest of the time a pink, oily substance is secreted through glands in the skin which is not only thought to prevent sunburn but also may have anti-bacterial properties that helps to keep wounds clean and prevent infection from the dirty water. The Pygmy Hippopotamus has slightly webbed feet, which help it when it is walking on muddy river bottoms and up slippery banks. Their webbed feet however do not prove to be a disadvantage on land, as the Pygmy Hippopotamus is capable of dashing through the well-marked tunnels in the vegetation at speeds of up to 30kph. Despite their appearance, both species of Hippopotamus are actually thought to be more closely related to Whales than they are to other even-toed mammals.

The Pygmy Hippopotamus has fascinated people since the ancient Egyptian times but they have also been exploited by them. Although now legally protected, this rare and elusive animal is hunted for both its teeth and its meat, which despite not being closely related, is said to taste like pork. People however, have also had devastating affects on Pygmy Hippopotamus populations throughout much of their natural range with deforestation of their native habitats pushing these animals into ever smaller and more isolated regions. Logging for the timber industry and land clearance for agriculture is illegal in many parts of their natural range but is sadly too much of an area to patrol effectively so the practice continues still, with Pygmy Hippopotamuses also then being poached in the process.

Today, the Pygmy Hippopotamus is listed by the IUCN as an animal species that is Endangered in its natural environment and is severely at risk from extinct in the near future. The sub-species of Pygmy Hippopotamus found in Niger is rarer still and listed by the Red List as being Critically Endangered, although many believe that it may sadly now be extinct. There are less than 3,000 Pygmy Hippopotamus individuals estimated to be left foraging in the hot, wet forests of western Africa today and numbers seem be declining still due to illegal hunting and habitat loss.

How to say Pygmy Hippopotamus in ...