Rhinoceros are giant, commanding animals found in Southeast Asia and Africa. But one of the most incredible rhinoceros facts is its horn. Unfortunately, the horn of this majestic creature ensures that it is a prize target of poachers. Regrettable rhinoceros facts include three species landing on the critically endangered list because of poaching. But let’s find out more about the beautiful rhino.

1. There Are Five Species Of Rhino

The various species of rhinos differ in size and physical features. These species are the:

2. Rhinoceros Facts – They Live In Forests and Savannas

Rhinos inhabit the forests and savannas of Southeast Asia and Africa. These regions contain a wide variety of food sources and shelter, making them ideal for rhinos. And while black rhinos live from South Africa to Ethiopia in natural reserves, the Indian rhino lives in grasslands and forests near the foothills of the Himalayas. In contrast, the Sumatran and Javan rhinos thrive in dense forest areas. However, the Javan rhino only lives in a single nature reserve where conservation efforts focus on reviving their numbers.

The elephant is the largest land animal, making the rhino the second largest. Rhinos are black, grey, or brown and have a cylindrical body, a big head, short legs, and a short tail. Besides their stout bodies, they have a giant horn in the middle of their face. Some species even have a second, smaller horn on their face. Other rhinoceros fun facts are that these animals have excellent hearing and a strong sense of smell but poor eyesight.

Rhinoceros facts must describe how heavy these animals are, no matter the species. The rhino varies in size and weight, but on average, they weigh 1.5 tons.

5. What Is A Rhino Horn Made From?

Rhinos have one or two large horns in the middle of their faces, which are made of keratin. Keratin is also a primary element of human hair and nails. The white, black, and Sumatran rhinos have two horns, while the Indian and Javan rhinos have one horn. Sometimes, the female Javan rhino will lack a horn or only have a bump on her nose. Poachers frequently target rhinos for their horns, as many cultures use them in traditional medicines, believing they have healing properties. The most prominent rhino horn ever recorded came from a white rhino that grew to 59 inches long.

The black, Sumatran, and Javan rhino species are critically endangered. In 2019, the International Rhino Foundation found only 5,500 black rhinos, 80 Sumatran rhinos, and 72 Javan rhinos left on the planet. The Indian rhino is listed as vulnerable, having 3,600 individuals left on the earth. In contrast, the white rhino has the highest numbers but is still listed as near threatened. Altogether, there are 18,000 white rhinos left on the planet. All the rhino species have increased their populations since 2009, except the Sumatran rhino. This species still suffers from poaching, and its numbers decreased from 250 to 80 rhinos between 2009 and 2019.

7. Many Subspecies of Modern Rhino Have Gone Extinct

These large herbivores eat plant materials like grasses, leaves, shoots, buds, and fruits. And while the rhinoceros may be herbivores and docile, it becomes aggressive when threatened or under attack. However, adult rhinos do not face many predators like their young. Young rhinos often face attacks from predators like lions, pumas, and crocodiles. When this happens, their mother will often defend them by charging toward the predator.

Female rhinos have the most prolonged pregnancy of all animals, which is roughly 450 days. In one case, a captive white rhino was pregnant for 548 days. Because of the lengthy gestation period, rhinos only give birth to a calf once every three to five years. And also, because of this, reviving dwindling rhino populations is a significant challenge for conservationists. Rhinos live long lives, between 35 and 50 years old. The oldest rhino in captivity was a white rhino who died at 55 years.

10. Rhinos Can Communicate With Each Other

Rhinos communicate through noises like growls, trumpet calls, snorts, sneeze-like calls, and screams. When rhinos are aggressive, they growl and make trumpet calls. When angry, they emit sneeze-like calls and scream when scared. Rhinos also communicate through urination and defecation. If a rhino urinates and defecates in the same place as other areas, that area becomes the communal latrine. Rhinos also spray dung and urine to mark their territory. Another rhinoceros fact is that they use body language to communicate. To show affection, they rub their sides and demonstrate their aggression by bashing their heads. When curious, they erect their ears and tails. 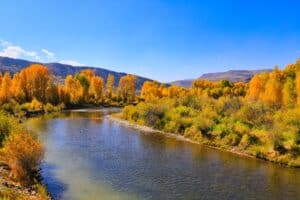