It's horns are made from keratin! 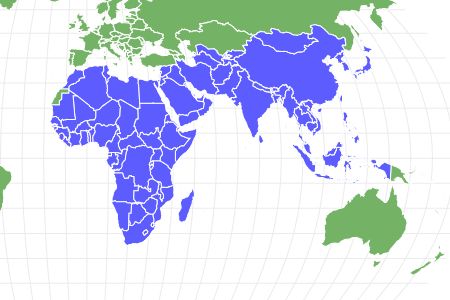 View all of our Rhinoceros pictures in the gallery.

View all of the Rhinoceros images!

The rhinoceros is an animal that was once found from Southeast Asia across Africa. Today, three rhino species are listed as “Critically Endangered” and clinging to small pockets of habitat.

With its distinctive horn and massive size, the rhino is one of the most unique animals on Earth. However, heavy poaching for its horn threatens several rhino species today.

Types of Rhino – The 5 Rhino Species

There are five separate species of rhino that vary dramatically in size and anatomy. Today, the rhino is an animal that lives across Africa and Asia.

The largest species of rhino, the white rhinoceros, is an animal that is native to Africa. While the Southern white rhino has rebounded from the brink of extinction today, the Northern white rhino is now functionally extinct after the last male died in 2018.

Known for its triangular upper lip, the black rhinoceros is an animal that once roamed across nearly all of sub-Saharan Africa. However, today it’s critically endangered.

Once found from India to the island of Borneo, today the Sumatran rhinoceros is critically endangered and located in just a few isolated pockets deep inside jungles.

While the Sumatran rhinoceros can still weigh up to 1,000 kilograms (2,200 pounds), it’s the smallest species of rhinoceros in the world. Sumatran rhinos are known for their prehistoric appearance, with hair that can cover their entire bodies.

Once roaming across Southeast Asia, The Javan rhinoceros today is limited to a single nature preserve in Indonesia named Ujung Kulan National Park.

The name rhinoceros is derived from the Greek words that mean “Nose-horn.” The rhinocerotidae family has five species with the following scientific names:

Rhinos are the second largest land animal, behind only the elephant. The species first evolved during the Eocene – an era that ended about 33.9 million years ago – and are one of the last surviving “megafauna.” That is, animals which are simply massive by today’s standards.

They have a robust, cylindrical body with a large head, relatively short legs, and short tail. The characteristic feature of these animals is a large horn in the middle of their faces; some species have a second, smaller horn.

Rhinos have brilliant hearing and the rhino also has a keen sense of smell, but the rhino is well known for having extremely poor eyesight. They are usually grey, black, or brown (though one species is called the “white rhino”).

Rhino species vary widely in length and weight, but average about 1.5 tons (1,360 kg) in weight as adults. The largest species, the white rhino can weigh up to 3,600 kg (7,920 pounds), which makes it nearly four times the weight of the smaller Sumatran rhinoceros on average!

The most notable features of rhinos are the large horns that grow from their heads.

Female Javan rhinos are notable in that they often lack a horn or have a smaller “bump” on their nose.

Unfortunately, rhinos face incredible pressure from poaching as their horn is desired for both traditional Chinese medicine and as a status symbol.

In 2006, Dr. Nico van Strien conducted a study on the longest rhino horns by species.

Rhino horns can grow in a variety of shapes. For example, a white rhino held in captivity in Sequim, Washington had a horn that grew to more than four feet in size that grew parallel to the ground. The horn grew so large it had to be trimmed twice using a chainsaw!

Rhinos generally live a solitary lifestyle. Black rhinos will more aggressively defend their territory while Indian and Javan rhinos have more loosely defined territory that may overlap. Sumatran rhinos, which live in more dense forests and vegetation are diligent about marking trails with feces and urine.

While most rhino species are solitary, the white rhino is the most social of all species. Groups of a dozen or more white rhinos will often form. This behavior is particularly common among females with calves, as it can help mothers protect their offspring at a time they face greater threats from predators.

A group of rhinos is called a “crash.”

The rhinoceros is generally found in thick forests and savannas where there is plenty of food to eat and lots of cover for the rhino to hide in. Rhinoceros’ once spanned a range that spanned across the majority of Africa and Southeast Asia, however today their range has been significantly reduced.

In Africa, the rhinoceros’ historical range was on grasslands and savannah stretching across most of sub-Saharan Africa. Today, while black rhinos can still be found stretching from Ethiopia to South Africa, their populations are limited to smaller pockets on nature preserves and other protected areas.

The Sumatran and Javan rhino live in denser forests and once saw their range extend across all of Southeast Asia, however today the Javan rhino can be found in only a single nature preserve while the Sumatran rhino has few remaining pockets of surviving population.

Like other rhino species, the Indian rhinoceros has seen its range dramatically decreased. It lives in tall grasslands and forests near the foothills of the Himalayas mountain range.

Rhino Population — How Many White Rhinos Are Left?

Three rhino species – the black, Sumatran, and Javan – are listed as “Critically Endangered,” while the Indian rhinoceros is listed as “Vulnerable,” and the white rhino is “Near Threatened.”

According to the International Rhino Foundation, in 2019 there is the following populations of each species:

Four out of the five rhino species have seen their populations increase between 2009 and 2019.

The lone exception is the Sumatran rhino, which lives in isolated pockets and continues to suffer from poaching. Between 2009 and 2019 it saw its population decrease from an estimated 250 individuals down to fewer than 80.

The last rhino species to go extinct was the Woolly rhinoceros (Coelodonta), which is believed to have gone extinct around 8,000 BC.

Rhinos face few predators in the wild. While juveniles, they can be attacked by large cats like lions or jaguars in addition to crocodiles and other larger predators.

Beyond the rhino’s imposing horn and significant size, the species also has thick skin that serves as a form of natural “body armor.” Learn about the strongest animals in the world here.

The number one threat to rhinos remains poachers. In South Africa alone, 769 rhinos were poached in 2018. Rhino poaching varies by species, with no Javan rhinos having been poached in more than 25 years as of 2019.

Rhino Diet: what does the animal eat?

The rhinoceros is a herbivore and eats grasses, leaves, shoots, buds and fruits in order to gain the nutrients that the rhino needs to grow and survive.

Although the rhino is a herbivore, they are known for their aggressive nature and will often charge towards oncoming predators in order to scare them away. Most rhinoceros individuals that are killed by poachers, are caught out when they are quietly drinking from a water hole and therefore drop their guard. For a complete list of foods rhinos eat, check out our “What Do Rhinos Eat?” page.

How long do white rhinos live? The oldest white rhino in captivity lived to 55 while the oldest record of a black rhino was 52 years, and oldest Indian rhino lived to 48. Generally, rhino species can live to be between 35 to 50 years old.

How long can rhino horns grow?

The largest ever recorded rhino horn was 59 inches and found on a white rhino. In general, rhino horns are about 20 inches in length but vary by species.

How fast can a rhino horn grow?

Rhino horns can grow back in about three years. Rhinos are often de-horned as a preventative measure against poachers, but it’s important to leave a portion of the rhinos horn for it to re-grow.

What is a rhino horn made of?

The horn of a rhino is made of hair grown tightly together, awhile a natural “glue” from glands on the rhino’s nose packs these hairs tightly together. You may have heard rhino horns are made of the same material as your fingernails, that’s because rhino horns contain tubules of keratin, a protein found across hair, skin, and nails.

Do rhinos have body armor?

Rhinos have unique skin structure and materials that make it quite different from most mammals. Compared to their body size, rhino skin is three times thicker than predicted and contains crosslinked collagen fibers. At its thickest, rhino skin can be about 2 inches (5 cm) thick.

What rhino species is the most endangered?

Where can I find a rhino?

As of December 2018, there were 302 zoos with 1,037 rhinos. The most common rhino in zoos is the white rhino, followed by the black. As of 2015, the last Sumatran rhino in the Western Hemisphere was moved from the Cincinnati Zoo back to Indonesia.

What food do rhinos eat?

Rhinos are herbivores and eat grasses, leaves, shoots, buds and fruits. Different rhino species have evolutionary features that are adapted to their diet. For example, the white rhino has a square

What is a group of rhinos called?

Most rhinos are solitary animals, but white rhinos will congregate into groups that can exceed a dozen individuals. When a group of rhinos forms, it’s called a “crash.”

What was the largest rhino?

An extinct rhino species that lived 34-23 million years ago stood 16 feet at its shoulder and weighed an estimated 20 tons! Today the largest rhino species is the white rhino, which weights up to 7,920 lbs (3,600 kg).

What is a rhino’s top speed?

What Kingdom do Rhinoceroses belong to?

Rhinoceroses belong to the Kingdom Animalia.

What phylum do Rhinoceroses belong to?

Rhinoceroses belong to the phylum Chordata.

What class do Rhinoceroses belong to?

Rhinoceroses belong to the class Mammalia.

What family do Rhinoceroses belong to?

Rhinoceroses belong to the family Rhinocerotidae.

What order do Rhinoceroses belong to?

Rhinoceroses belong to the order Perissodactyla.

What type of covering do Rhinoceroses have?

Rhinoceroses are covered in Leathery skin.

What are some predators of Rhinoceroses?

Predators of Rhinoceroses include humans and wild cats.

What is the average litter size for a Rhinoceros?

The average litter size for a Rhinoceros is 1.

What is an interesting fact about Rhinoceroses?

Rhinoceros horns are made from keratin!

What is the scientific name for the Rhinoceros?

The scientific name for the Rhinoceros is Rhinocerotidae.

What is the lifespan of a Rhinoceros?

Rhinoceroses can live for 35 to 50 years.