Honeybees and bumblebees are named very aptly, which makes it much easier to distinguish between them! Yet, what separates bumblebees vs honeybees? In the article below we’ll dive into the differences!

Honeybees are the bees that we domesticate. They make lots of honey—enough for bee keepers to take the excess from the hive for human consumption.

Bumblebees make little honey, but are more known for their loud buzzing and the way they “bumble” around, slowly pollinating flower after flower. You might watch these bees fly peacefully through a garden or field, taking their time interacting with each plant.

The easiest way to tell these bees apart is their appearance, but they are also different in lifespan, nesting, socialization, and in several other ways!

Bumblebees and honeybees are quite different from one another, but are easy to mix up if you don’t know the differences. They both have cute names and are docile bees.

Here are some of the key things to look for when you next see these bees in your garden:

The 8 key Differences Between Bumblebees and Honeybees

There is a big temperament difference between honeybees and bumblebees if you observe them interacting with one another.

Honeybees are more cooperative. They communicate with one another about the best pollen sources, work together to keep the queen and each other warm through the winter, and swarm more than bumble bees.

Bumbles are more independent, with new queens emerging each year and buzzing off to create their own colonies.

Honeybees might also be more docile with humans due to their domestication and selective breeding. However, neither of these bees is particularly aggressive.

Humans keep domesticated honeybees because they create excess honey, while bumblebees haven’t given us a reason to domesticate them. They do produce honey, but only enough for the hive to survive on.

They do not build up stores for winter, as they’ll be in hibernation by this time.

4.     Bumblebees are Plump and Round

You’ll be able to tell the difference between honeybees and bumblebees the moment you look at them. Bumblebees are round and furry. They look kind of fluffy and huggable!

Honey bees are slimmer, with heads distinctive from their bodies. You can’t easily distinguish a bumblebee head from their body due to their plumpness.

If you’re mistaking the bee for a wasp, it is most likely a honeybee—not a bumblebee.

Due partially to their cooperation, honeybees live longer than bumblebees. They gather together in the winter for warmth, keeping themselves and their queens alive longer. A honeybee queen may live over 3 years.

Bumblebees, on the other hand, die within months. Even their queens don’t last the winter, instead dying off as their job is taken over by their offspring in brand new hives.

Bumblebees can sting multiple times, unlike many other bees and wasps. Luckily, we’ve already discussed their independent natures—this makes them much less likely to swarm and sting at once.

Honeybees can only sting once, but you might be stung by many more of them if you encounter a swarm!

Bee stings aren’t typically deadly, although they can be if you’re stung in excess or are allergic to bees.

We’ve discussed how honeybees don’t hibernate. This is why they store so much honey to get them through the winter months, when pollen is difficult to find.

Honeybees sleep through these months, counting on their fat stores to get them through.

Honeybees work smarter, not harder. They tell the other bees where to find lots of pollen, then concentrate on those areas.

This makes them very effective at honey-making, but less so at pollinating a wide range of flowers.

Bumblebees, on the other hand, tend to bumble around an area pollinating many plants as they go. They’re also larger, and can carry more with them, which helps them as they complete their chores. 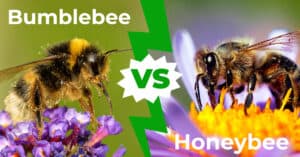