Written by AZ Animals Staff
Published: September 17, 2021
Share this post on:
More Great Content:
The Top 9 Largest Flying Birds in…
Top 9 Largest Eagles in the World
The Top 10 Largest Birds of Prey
Types of Hawks In Iowa - With…
What Do Ducklings Eat? 13 Foods for…
What Do Crows Eat? 15-Plus Foods They…

Cassowaries live in three locations: Australia, Indonesian islands, and the island of New Guinea. Yet, each of those locations covers a significant amount of land! Let’s examine the three species of cassowaries and the habitats and locations they can be found in!

Where Do Cassowaries Live: Their Habitats

The first thing to know about cassowaries is that their habitat differs from other large, flightless birds like ostriches that live in savannas or desert-like conditions.

Cassowaries eat an extremely fruit heavy diet, so they in rainforests where fruit along the ground is plentiful. Occasionally cassowaries can be found in other habitats such as bog, grasslands, or even beaches, but this is normally only for brief periods when they’re traveling to new forest locations.

There are actually three different cassowary species, so we’ll identify individually where each one lives.

Southern cassowaries are the most common cassowary species. IUCN estimates place their population at between 20,000 to 50,000 birds.

Southern cassowaries are the only species that lives in Australia. Their Australian range is limited, and consists of only three separate populations on the the Cape York peninsula. The map above shows where southern cassowaries live, with their largest center around the city of Cairns.

Southern cassowaries also live on the southern half of the island of New Guinea. They prefer lowland habitats, rarely ranging above an elevation of 3,000 feet. Their range extends across the entire southern coastline of the island and they’ll live inland up until the Central Range of mountains that run through the middle of New Guinea.

Northern cassowaries have a smaller range than their southern neighbors. The species’ ranges do overlap in some spaces, such as the west coast of New Guinea, but the northern side of the island has less lowland space to populate. Due to less range, its estimated there are about 10,000 to 20,000 northern cassowaries, which is half the population of the southern species.

Dwarf Cassowary: Lives in the Mountains of New Guinea

Dwarf cassowaries are only about half the size of the other two species and live in the mountains of New Guinea. They have been observed living in locations that are nearly 12,000 feet in elevation and avoid lowland habitats. Due to this preference for New Guinea’s highlands, dwarf cassowaries mostly live across the center of the island. In addition, dwarf cassowary populations live on some surrounding islands, such as Yapen Island.

Can Dogs Eat Lettuce? It Depends on How It’s Been Prepared 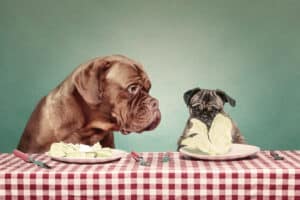