Cayenne Pepper vs. Red Pepper: Is There a Difference?

Written by Hannah Ward
Published: October 19, 2022
© iStock.com/ClaireLucia
Share this post on:
More Great Content:
Is Hibiscus a Perennial or Annual?
Rose Of Sharon vs. Hardy Hibiscus
7 Extinct Trees
Are Mushrooms & Other Fungus Plants?
The 5 Best Annual Flowers For Zone…
Are There Any Plants That REALLY Keep…

Peppers are some of the best-known food products around the world. They have a wide range of uses and can be eaten in many different forms. Although they can come in several different colors, the best-known color is red. Quite often, red peppers are classed as being some of the hottest in the world. But what about cayenne peppers – are they hot too? Is there a difference between them? Join us as we discover everything you need to know about cayenne pepper vs. red pepper!

What Are Cayenne Peppers and Red Peppers?

Cayenne peppers are the “Cayenne” cultivar of the species Capsicum annuum, which is a flowering plant in the Solanaceae family group, better known as the nightshade family. Capsicum annuum is native to the Caribbean, the southern region of North America, and the northern region of South America. It typically reaches 1 to 4 feet tall and produces white to purplish colored flowers and fruit (peppers) which are red, orange, yellow, or green when they are ripe. Other cultivars of the plant include bell peppers and jalapeños.

Red pepper is a broad term, and it can be used to describe many different types of peppers. It is generally used to describe any peppers in the Capsicum genus which are red. This includes cayenne peppers, bell peppers, and Red Savina peppers (Capsicum chinense “Red Savina”).

There are approximately 20 to 27 different species within the Capsicum genus. However, there are five that are widely grown and cultivated as food products – C. annuum, C. pubescens, C. frutescens C. chinense, and C. baccatum.

What Are the Differences Between Cayenne Pepper and Red Pepper?

Cayenne peppers are 4 to 6 inches long. They are characterized by their skinny appearance, with a slightly curved tip and wrinkled skin. However, as red pepper can be used to describe several different species and cultivars of pepper, their shape and appearance can vary widely. Incredibly, the shape of red peppers can even vary between different cultivars of the same species. Bell peppers are a different variety of the same species as cayenne peppers (Capsicum annuum), yet they are characterized by their blocky bell shape, which is significantly wider than cayenne peppers.

The shape and size of other species of “red peppers” can also vary widely. Peppers in the C. pubescens species are distinguished by their apple-shaped appearance, while many in C. frutescens are only small-sized.

The reason that many peppers are so hot is that they contain capsaicin which is a natural compound. The amount of capsaicin in the pepper is what determines how hot it is. This can vary widely between the different species and cultivars, which is why not every red pepper has the same heat. In fact, the red bell pepper doesn’t have any heat at all. But, don’t be fooled into thinking that they’re all like that as some can be very hot indeed!

Although it’s not uncommon for people to associate cayenne peppers with being amongst the hottest peppers, they are typically described as being of medium heat. Cayenne peppers are usually between 30,000 and 50,000 SHU on the Scoville scale (the scale with is used to determine the strength of chili peppers).

However, some of the hottest red peppers in the world are varieties of the Capsicum chinense species, with some registering an eye-watering 2 million on the Scoville scale.

How To Cook With Cayenne Pepper vs. Red Pepper

Although they are most often used for their striking flavor, peppers can actually be really beneficial. The capsaicin in peppers doesn’t just pack a punch to the tastebuds – it can act as a powerful antioxidant and anti-inflammatory. They can help to relieve pain, lower cholesterol, and reduce the risk of cardiovascular disease. Also, the peppers are already full of vitamins and minerals, which are good for you!

So, although we don’t recommend eating a whole bunch of red peppers, as well as being good for you, adding pepper to your recipe can bring that extra bit of heat to it to transform the entire taste of the meal. There are many ways that you can use cayenne peppers and red peppers when you are cooking. As well as using them in their fresh form, in many cases, they are dried and used in powder form – which is often the best way to just add a pinch for seasoning.

Peppers – and especially cayenne peppers – are widely popular in Mexican cuisine, and they are a great ingredient to add to dishes such as enchiladas and tacos. You can cook fresh peppers virtually any way that you like. Popular methods include making them into marinades or sauces. Also, depending on how spicy the peppers are, you can simply chop them up and fry them along with the rest of the meal.

How To Grow Red Peppers

So, if you love the taste of red peppers and would like to try your hand at growing your own, then you’ll be pleased to know that they are fairly easy to grow so long as they’re given a little care. Although it can vary slightly depending on the actual species or variety, most peppers are sensitive to frost. They are technically perennials and are usually grown as annuals in colder regions. Although you can start them indoors, for the best results, you should wait until the temperature is above 65°F.

Peppers should be situated in a warm, sunny spot and planted in well-drained soil. Seeds should be planted around 1/4” deep and at least 12 inches apart. The soil should be kept moist. However, over-watering should be avoided, as it can damage the plant – typically only water when the top couple of inches of soil has begun to dry out. Most pepper species are ready to be harvested from mid-summer onwards, around 75 to 100 days after planting. 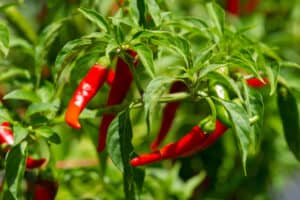