Copperheads in Virginia: Where They Live and How Often They Bite

Written by Emmanuel Kingsley
Published: May 20, 2022

Although the figure isn’t exactly agreed upon, it is safe to say that Virginia is home to about 32 species of snakes. One of these species is the copperhead snake. Copperheads are venomous pit vipers known for their reddish-orange heads and deadly venom. Many claim that the species is aggressive and mean- but is this true? This article takes a look at copperheads in Virginia: Where they live and how often they bite.

What Copperhead Species is Found in Virginia?

The northern copperhead (Agkistrodon contortrix mokasen) is found in the state of Virginia. They are one of the state’s 3 venomous species. Copperheads live solitary lives but pair to mate twice yearly.

Northern copperheads are pit vipers. This means that they have moveable fangs as well as pit organs which they use to detect heat and movement. They are also ovoviviparous and have 2 to 10 young snakes at a time. Young copperheads have yellow-tipped tails. According to researchers, this helps them attract or lure prey such as frogs, grubs, and other small insects.

Female copperheads sometimes battle potential mates. They are known to reject mates that lose. Copperheads, like most snakes, hardly compete again after losing once. Male copperheads that have mated successfully may produce pheromones that make their female mates unattractive to other male copperheads. If a female copperhead mates in the fall, she will store the sperm in her body till after hibernation.

How Often Do Northern Copperheads In Virginia Bite?

Although there are no official statistics, the Chesterfield Observer published an article in May 2022 that featured J.D. Kleopfer, a herpetologist with the Department of Game and Inland Fisheries. Kleopfer stated that about 100 bites are reported each year throughout the state of Virginia.

Statistics show that copperheads bite more people in the USA than any other snake. The United States sees an estimated 2,920 bite victims each year.

Northern copperheads have hemolytic venom which they use to subdue their prey. Their venom causes red blood cells to break down. Luckily, in humans, their bites aren’t always fatal. The fatality rate according to research scientist Henry M. Parrish’s article published in 1967, is about 0.01%.

Their bites are notoriously painful and accompanied by severe pain, incessant tingling, throbbing, as well as intense nausea. They have an estimated lethal dose of around 85- 100 mg but yield 26 mg of venom on average- with a maximum of 85 mg.

Northern copperheads aren’t aggressive snakes. They prefer to hide from humans but do not hesitate to bite if they feel threatened or attacked.

Where Are Northern Copperheads Found in Virginia?

In Virginia, it’s pretty hard to miss these northern copperheads. They are widely distributed in every part of the state except the barrier islands. Copperheads can be found in old fields, marshes, rocky outcrops, and forests. In urban areas, they can be found in abandoned buildings, stone walls, and brush piles.

What Months Are Copperheads Most Active?

Northern copperheads are most active during early spring and late fall. They hibernate during the winter.

What is the Most Venomous Snake in Virginia?

Northern copperheads are heavy snakes with keeled and dorsal scales. They hardly grow past 36 inches making them medium length. They have the telltale triangular copper or orange-red head that all copperheads have. Copperheads in Virginia have hourglass patterns over their pinkish-tan bodies. The hourglass patterns are usually colored dark brown or chestnut. Northern copperhead snakes have undersides or bellies with round spots.

Copperhead snakes swim. However, they do not submerge themselves. They swim atop the water with their head above water level. They hardly go completely underneath the water.

How to Avoid Copperheads in Virginia

Avoiding copperheads in Virginia is the easiest way to avoid getting bitten by them. Here are some tips to help you stay safe.

What To Do If You See a Copperhead in Virginia

Copperheads will usually freeze when spotted in hopes of camouflaging and not being seen. They are not aggressive and will usually escape without biting if they can. If you spot a copperhead in your home, contact pest control services but if you spot one in the wild, leave it alone.

Other Venomous Snakes Found in Virginia 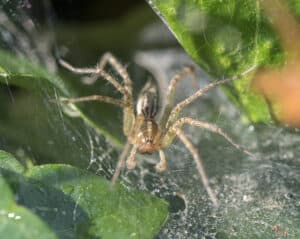