Goats and rams share several similarities at first glance, but there are many key differences between these animals that you can spot if you know what to look for. Here, we are using ram as a reference to a male sheep of both domestic and wild species. While goats and rams are both even-toed animals of the Artiodactyla order, goats belong to the Capra genus, while rams are a part of the Ovis genus.

Other than their genetic makeup, there are several physical and behavioral characteristics that are unique to either species of goat vs ram. A primary difference will be their horn size and shape, as well as the look and layering of their coats. Others that aren’t so obvious are the goats vs ram’s foraging patterns, life span, and tail shape. Let’s talk more in-depth about these key differences now.

The 5 Key Differences Between Goats vs Rams

The main differences between goats and rams lies in their morphology and their foraging behaviors. Rams, otherwise known as male sheep, tend to be larger than goats. In addition, rams will also have larger curved horns than the narrow horns of the average goat. Another key feature that may be superficially different is the fur of the ram will be thicker than that of a goat’s, and typically have two layers in order to combat the cold in their preferred climates. Their behavioral differences are seen mainly in their preferred diet. While they are both herbivores, goats and rams have differing ways that they prefer to find food.

Let’s explore more about what makes each of these iconic animals unique!

On both the goat and the ram, the first feature you will see a drastic difference in will be the size and shape of their horns. Rams are notorious for their signature curved horns. They are used predominantly during breeding season in competition with other males. These horns can weigh up to 30 lbs! Using these horns, rams can deliver a powerful headbutt to any competing males or as a show of strength to any perceived threat.

Goat horns, as opposed to those of a ram, are much more narrow and pointed. These horns tend to grow upwards, as opposed to curving so extremely backward. While they also use their horns to ward off possible threats, goat horns appear very different from those of ram.

While both goats and rams will grow their horns from birth, each is just as different texturally. Ram horns are not only larger and curved, but they are also ridged and bumpy. The average goat horn appears smooth to the touch, lacking the distinct ridges that make rams horns so unique.

Long-cultivated for their wooly fur, rams and sheep have a much thicker, multi-layered fur coat than those of their goat counterparts. Ram wool typically has two layers: an outer coat and an undercoat to protect vital organs from colder climates.

On the other hand, a goat does not have the ram’s distinct thick wooly coat and instead has to rely on a single layer to keep them warm. In addition, their fur is on average shorter and thinner. This gives the goat a much less bulky appearance than a ram you may see.

Another morphological difference between the ram and the goat will be its tail. Goat tails are typically shorter, less furry, with an upwards point to them while the tail of a ram will have a woolly tail with a downward direction. It may be a subtle distinction, particularly since many domesticated rams and sheep will have their tails docked.

There has been a long history of docking sheep and ram tails. This is largely done to prevent health complications over the animal’s lifetime, as bacteria and parasites will thrive in unsanitary conditions. By docking their wooly tail, stockmen and animal caretakers can mitigate the presence of feces on the animal’s coat. If left unaddressed, infection and more major health complications may arise, such as flystrike.

The average ram not only looks larger than goats due to its thick wool coat but a ram will usually have more mass than that of a goat. While goats and rams can be similarly shaped since they share some genetic material, goats usually both look thinner and weigh less than rams or sheep.

Rams are less particular in their foraging when compared to goats. The average goat is known as a browser, which means that goats will prioritize the foragable food sources with a higher nutritional return. Rams, on the other hand, have little preference and will typically focus on feeding in a particular area as opposed to searching for more specific food sources. Rams are considered grazers because of this.

Since rams are grazers, they will typically move slowly with their flock in a given foraging area and eat indiscriminately as they go. This is not the case with goats, who are selective in what they eat. Goats will favor certain flora because of their nutrient content and quality.

Not only will goats seek out more specific foods for their diet, they will often use more creative methods like standing on their hind legs or even climbing short distances to feed on taller shrubs or brush.

Which signs do these animals represent in astrology?

These are each animals of the zodiac. The goat is a representation of the sign of Capricorn, while Aries is represented by the ram. 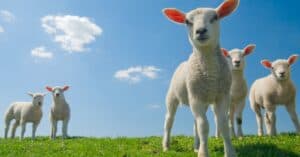