Liger vs Tiger: What are the Differences?

Perhaps you have encountered some strange mammals in the zoo, including a quite recognizable species that looks like a hybrid of a lion and a tiger. If so, then what you may have witnessed is a liger or a ligress, a mixed breed offspring of a male lion and a female tiger. At first, they may be thought of as absurd or another experiment of cross-breeding. But in reality, ligers actually exist, and they can be found in zoos. But how are ligers different from tigers? They may have come from the same genetic breed, but as ligers are mixed with lion DNA, they sure have their differences. So, what are the features that differentiate the liger vs the tiger? In this article, we will take a deep dive into the attributes that set each wild cat apart.

Comparing a Liger and a Tiger

The 5 Key Differences Between a Liger and a Tiger

It is not surprising that ligers and tigers have too much in common. They share some same genetics after all. But looking closely, these two wild cats are different in their ways. The main differences between ligers and tigers include their size, weight, appearance, behavior, roar distance, and lifespan. Ligers are born from a hybrid of a lion and a tiger, thus their similar appearance with tigers. Like tigers, ligers also belong to the genus Panthera which encompasses all spotted wild cats that have specific anatomical structures that help them roar. However, despite the similarities between the two wild animals, it is still easy to spot the differences between the two. Below, we are going to review and break down what makes a tiger different from a liger.

Liger vs Tiger: Size and Weight

On average, a liger weighs around 900 pounds, while the biggest tiger breed (the Siberian Tiger) weighs between 600 and 660 pounds. A liger can sometimes weigh more than 900 pounds, making it the largest known species of cat. Ligers typically measure between 9.8 to 11.8 ft long, while tigers can only reach 8 to 11 ft long. Since the lion is significantly bigger than tigers, the cross-breed between the two results in a massive wild cat. Apart from a longer and heavier body, ligers also have bigger body structures compared to tigers.

“Hercules”, a giant 10-feet-long liger has made it to Guinness World Records as the world’s largest living cat, weighing 922 pounds. Similarly, many tigers have been recorded to weigh more than 650 pounds. In 1986, Jaipur, a Siberian tiger kept in captivity, weighed roughly 932 pounds.

While tigers are easily spotted due to their iconic orange fur striped with black lines, ligers have a golden to tawny brown color that they got from lions. Ligers have a fur coat that is more similar to lions. However, this lion fur is striped with black lines like that of a tiger. Looking closely, ligers seem to have more abundant and more compressed black stripes than tigers. While ligers have a lion’s face, the fur in their face exhibit spots or markings similar to tigers.

Moreover, lions are distinguished by the remarkable mane on males. Some ligers also have manes, but they do not grow as big and bushy as lions. On the other hand, tigers do not have mane at all.

Ligers typically get their personality from both of their parents. However, despite having fierce, predatory parents, ligers are more docile and gentle compared to lions and tigers. While ligers can be gigantic, they are not aggressive animals. In zoos and other sanctuaries, ligers are reported to gently interact with their handlers. They also love to swim like tigers and are very fast hunters in the wild. Tigers, however, are more territorial and prefer to live alone. They only interact with others for mating reasons. Tigers are good climbers as well. They can climb trees and leap a distance of 4 kilometers. Ligers can also leap that far, but they cannot climb trees. Their heavy bodies aren’t swift enough to move through trees like tigers often do.

Ligers are known to make sounds that both lions and tigers make. But when it comes to their roar, you can really hear who among the two is the real king of the jungle. A liger can be heard roaring like a lion from at least five kilometers away. A tiger’s roar, on the other hand, can only be heard from 3 kilometers away. Like a tiger, a liger chuffs, which is thought to be a welcoming sound gesture.

Ligers, overall, are more like their lion father than their tiger mother. For instance, a liger’s roar sounds more like a lion’s roar than a tiger’s. 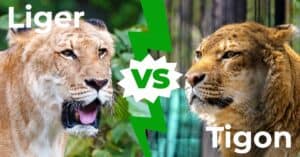