Written by Emilio Brown
Published: January 1, 2022
Share this post on:
More Great Content:
Siberian Tiger vs Bengal Tiger: What’s the…
How Many Tigers Are Left in the…
Tiger Lifespan: How Long Do Tigers Live?
What Do Tigers Eat?
How Many White Tigers Are Left In…
Discover the World's Largest Tigers

One of the largest big cats currently found is the Siberian tiger. They have a small range and population, only found in Far East Russia. Siberian tigers are one of the world’s fiercest predators and use their large size to reign over the land they live in. There are around 9 different tiger subspecies, and the Siberian tiger is the largest of them all. In the wild, this tiger’s size is limited by its habitat, but there have been cases of this species reaching close to 1,000 lbs. Let’s discover the largest Siberian tiger ever and why it is much larger than other big cats.

The Largest Siberian Tiger Ever Recorded

The largest Siberian tiger on record weighed in at a massive 932 pounds!

Unfortunately, there will likely be no records set for the largest Siberian tiger in nature anytime soon. Scientists analyzed the weight of Siberian tigers and found their size has decreased significantly from the first half of the 20th century. In fact, Siberians have decreased in size enough that there’s an argument to be made that Bengal tigers are now larger on average. Siberian tigers are shrinking due to hunting of larger specimens and diminishing opportunities to hunt larger prey.

In 2021 the world’s current largest living cat is Hercules, a tiger and lion hybrid. He was born in 2003, and weighs 922lbs (3.3m), and is 11 ft tall (3.3m) when standing. Hercules lives in Myrtle beach safari WildLife reserve in South Carolina. His size is due to his diet of around 20lbs of meat a day and his captive lifestyle. Ligers are one of the largest big cats, but you won’t find any in the wild. Tigers and lions won’t breed in the wild because lions are mainly in Africa, while tigers live in Asia where only a small lion habitat exists.

Siberian Tigers In Captivity vs. The Wild

Siberian tigers in captivity are much larger than the ones you will find in the wild. In the wild, they live in cold regions in Far East Russia and China. When Siberian tigers are brought into captivity they have access to more food and do not have the ability to travel long distances. In the wild Siberian tigers can travel as much as 620mi (1,000km) in search of a meal. Tigers and solitary creatures, and spend most of their day using energy to roam and hunt.

In captivity, some tigers only live in cages measuring around 13 by 23 feet (3.9 by 7.0 meters). Tiger sanctuaries will have cats in much larger spaces, but they are not able to be as active as they would be in the wild. Tigers in captivity also are fed much more often, on a daily schedule. Siberian tigers have the capability to be the largest subspecies, but as we noted earlier, they’re shrinking across their natural habitat.

Elk, deer, boar, rabbits, and boar are some of the things their diet contains. In the areas Siberian tigers live within Russia, food can sometimes become scarce.

Lions are another species of big cats that compete with tigers in size and ferocity. On average males lions weigh 418 lbs (189.6kg) and females weigh 280 lbs (126.9kg). The largest lion on record weighed 827 pounds and lived in captivity.

Here is a list of the 5 largest big cats in the world.

Why Are Siberian Tigers So Large

Siberian tigers live in colder regions and have more fat on their bodies to remain warm. Currently, they are the considered the largest of the tiger species (although, that may change with time). With mammals, one rule for some species is that the farther north they are found from the equator, the larger they will be. In an intense cold, animals will need more size to survive in those temperatures. Siberian tigers live in the eastern Russian mountains in forests near the border of China. They have adapted to live in high altitudes and harsh winters.

The Endangerment of Siberian Tigers

Today tigers are classified as endangered, with all subspecies having low populations. The Bengal Tiger found in India is the most populated species, with around 2,000 members currently remaining. Poaching is a big issue for tigers because of their iconic skin pattern and claws. Efforts are being made in most areas where tigers live to try and maintain their population. 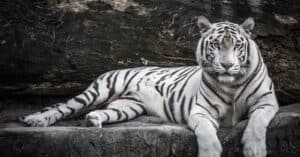 How Many White Tigers Are Left In The World?