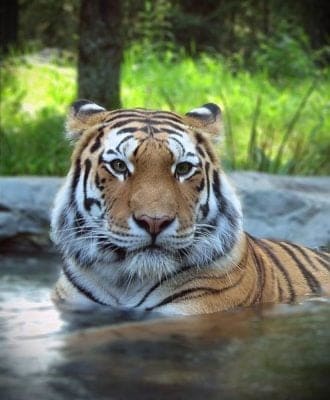 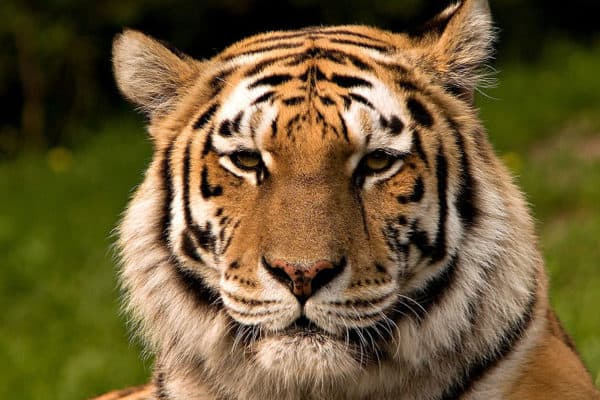 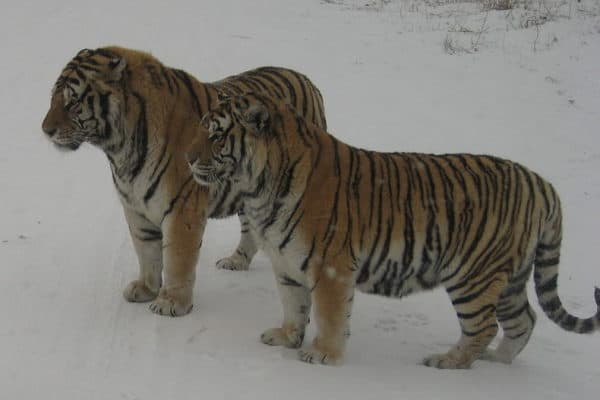 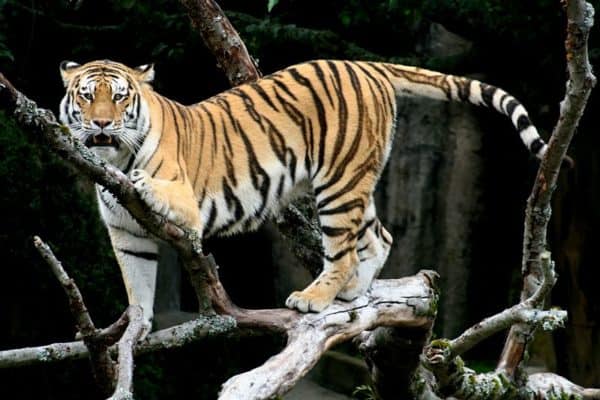 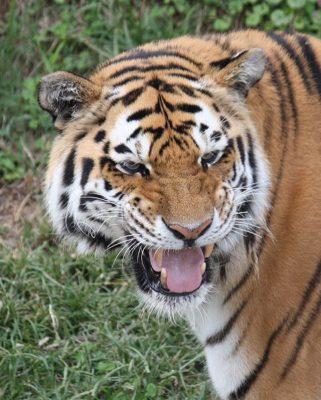 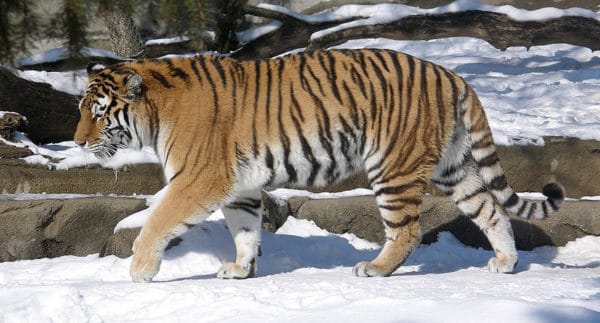 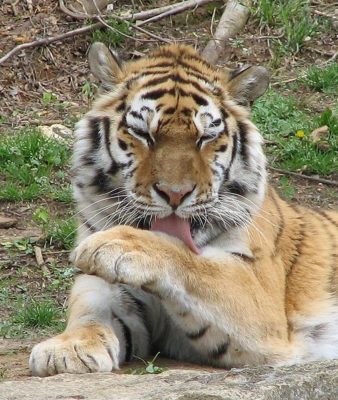 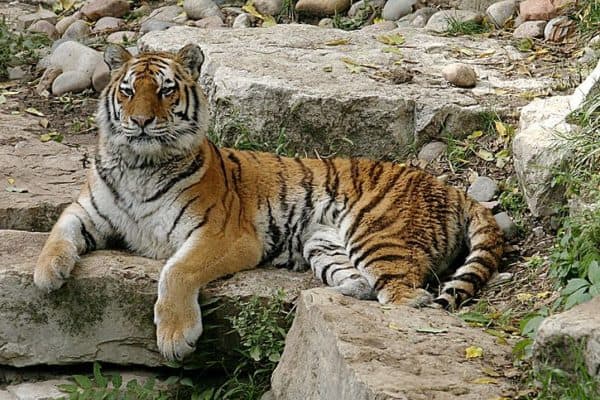 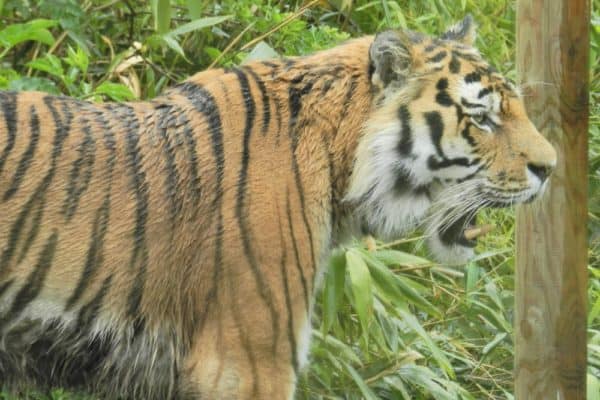 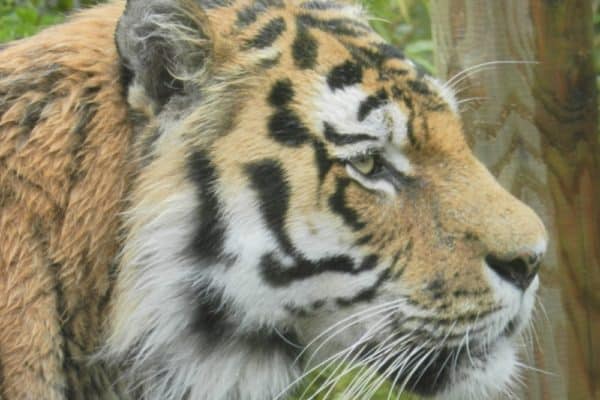 A regal symbol of strength, power, and fortitude, the Siberian tiger is one of the fiercest predators in the world.

With its immense size and powerful body, the Siberian tiger prowls the dense forests of Eastern Asia in search of prey. Specially adapted for the frigid climate in which it resides, it is a sophisticated predator capable of taking down almost any other animal, no matter its size. But because of the value placed on its luxurious fur and the supposed medicinal properties of its parts, the animal is under constant threat of extinction from human activity. Meticulous conservation efforts and protection from local governments will be required to bolster current population numbers.

The scientific name of the Siberian tiger is Panthera tigris altaica. The word ‘tigris’ means tiger in ancient Greek. However, the Greeks apparently borrowed the word from other languages, like Persian. The word ‘altaica’ is derived from the name of the Altaic language group, which is spoken across Central and Eastern Asia.

The Siberian tiger is currently classified as a subspecies of the tiger, which makes it closely related to the Caspian tiger, Bengal tiger, and Malayan tiger. There has been some debate about how many subspecies of the tiger truly exist, but a genetic analysis supported the idea that there are perhaps as many as six distinct subspecies in total. Although they are technically the same species, these groups are separated geographically by thousands of miles across Asia.

The tiger is part of the same genus as the lion, jaguar, and leopard. It likely branched off from the rest of the genus a few million years ago, perhaps somewhere in Central Asia. The tiger is more distantly related to the wildcats, domesticated cats, and cougars in other genera within the felid family.

The Siberian tigers are the largest and most powerful subspecies of tigers in the world — and among the most powerful animals of any species anywhere. The size of the tiger can vary widely, but the largest specimens can be around 11-feet long and have a weight of close to 700 or even 800 pounds, which makes these animals nearly the size of a grand piano.

The Siberian tigers have a thick coat of fur to protect them from the frigid climates of their native habitat. The fur consists largely of pale orange colorations around the head, legs, and back, plus additional white colors around the eyes, snout, cheeks, and inner legs. The most distinctive feature of the Siberian tiger is the narrow black stripes around the head and body, which provides camouflage and stealth in the forests. However, it has relatively fewer stripes compared to other tiger subspecies.

Other distinguishing characteristics of the Siberian tiger include the thick paws, short pointed ears, flattened head and snout, a big muscular body, and a tube-shaped tail with black and white markings. It has longer hind legs than front legs, which enables it to jump truly impressive distances in the air to subdue prey. Their long and fearsome claws and teeth allow them to latch on and prevent the prey from escaping.

Tigers mainly communicate through their sense of smell and their limited vocalizations. Their long whiskers also help them navigate close spaces, especially in the dark. However, like many other felid species, Siberian tigers lack a complex social structure. They are largely solitary creatures that aggressively police their territories through either claw marks on trees or scent marks sprayed with urine and secretions. This tells other tigers to be wary of intruding on an individual’s current hunting grounds.

Despite their fierce territorial aggression, these tigers are actually somewhat mobile animals that have been known to travel hundreds of miles at a time in search of homes and mating opportunities. Young adult males in particular may move frequently before establishing a more permanent territory. Male and female territories often overlap slightly for mating purposes.

The Siberian tiger once occupied a larger swath of territory across the modern-day Russian Far East, northeastern China, and the Korean peninsula. But due to population loss, the subspecies is now restricted to a narrow range around the Sikhote-Alin mountain range near the Pacific coast of Russia. It is also possible that the range extends slightly into North Korea and China. These tigers tend to prefer the dense mixed forests around the region. Their distribution appears to be based on the presence of prey in the area.

The Siberian tiger is a carnivorous apex predator that feeds almost entirely on meat. Its diet consists primarily of large ungulate prey (meaning hoofed animals) such as elk, roe deer, and wild boar. Other potential prey includes rabbits, salmon, and even, on rare occasions, bears. They have also been known to feed on livestock in areas where tigers and humans overlap. They prefer to hunt at night when their prey is most active.

Despite their enormous size, tigers are silent and stealthy hunters that will sneak up on prey under cover of rocks and trees to ambush and kill them almost instantly with a powerful bite to the neck. They can also run at top speeds of around 30 to 40 miles per hour for short periods of time to chase prey.

Only a small fraction of ambushes will actually result in a successful kill, so the tiger must be constantly vigilant for good hunting opportunities. They can eat up to 60 pounds of food during a single successful night, but they can survive on far less if they cannot catch an adequate amount of food. The tiger does not usually eat every part of the deceased prey, leaving behind part of the carcass for other animals.

Siberian tigers almost always try to avoid contact with humans, but a few animals have been known to eat people if their traditional prey is absent or they cannot hunt successfully because they are sick or old. These types of “maneaters” are rare, but once they’ve begun eating human flesh, they often may make it a regular part of their diet.

A full-grown Siberian tiger faces few natural threats from other animals outside of rare instances of death from wolves or bears. However, despite their relative isolation from human populations, both poaching and habitat loss from humans are persistent problems. Siberian tigers are hunted for several reasons, including their use in clothing, trophies, and traditional medicine. The development of the region for logging and farming has also contributed to the decline of the Siberian tiger.

It is currently considered an endangered subspecies.

Siberian tigers have no fixed reproduction schedule. Instead, they can mate at any time during the year. The mating cycle usually begins when one of the tigers leaves scent or scratch marks on nearby trees to attract their mate. The male and female will then meet and spend a few days with each other alone. The male will depart soon after, leaving the female to take care of and raise the cubs alone.

After carrying the unborn young for about three months, female tigers will produce litters of two to six cubs at a time. As they are typically born blind inside of dens, the cubs are most vulnerable during this period and require quite a bit of care and attention. The female may leave them alone in the den for short periods of time as she searches for food.

It takes a few months before the cubs will be fully weaned from their mother’s milk. The mother must then not only hunt for herself, but also for her quickly growing cubs, which will become more self-sufficient at only about 18 months of age. They will remain with the mother for two to three years, after which they will wander off on their own and establish their own territories.

Siberian tigers have a similar life span to other felid species. Assuming they die from natural causes, they usually live at least eight years in the wild. However, some tigers are known to live well into their twenties. They may potentially live even longer in captivity.

The International Union for the Conservation of Nature (IUCN) red list, which categorizes the conservation status of worldwide animal populations, currently lists the Siberian tiger as an endangered subspecies, up from critically endangered in 2007. The Siberian tiger was likely at its peak in the 19th century, when they roamed across much of the Korean peninsula and parts of Manchuria. But after years of depletion, it is believed that the population reached a low of only 20 to 30 individuals in the 1930s.

Thanks to industrious conservation efforts, the numbers have since rebounded into the hundreds. Based on population estimates from a 2005 survey, there were around 360 individuals in the wild, 250 of which were of breeding age. Another estimate from 2015 suggests that there are approximately 500 Siberian tigers remaining in eastern Russia. A sizeable number of Siberian tigers are also kept and bred in captivity.

Part of this success can be attributed to the careful protection and maintenance of the wild tiger populations and a ban on the international and domestic trade of tiger parts. However, illegal poaching (as well as lax enforcement of anti-poaching protocols) continues to represent a significant threat to their survival. Another significant problem is the low genetic diversity due to falling population numbers. Conservationists hope to bolster population numbers further by reintroducing the Siberian tiger back into parts of its former range farther to the west and south.

View all 69 animals that start with S

Like all tigers, the Siberian tiger is a carnivore. Their diet consists primarily of large hoofed animals. However, they will also eat rabbits, salmon, and occasionally bears.

How big is a Siberian tiger (length and weight)?

The size of a Siberian tiger depends on the individual’s gender, plus genetics and health. Because of a phenomenon called sexual dimorphism, the male tigers tend to be larger than females. Females can weigh anywhere between 200 and 400 pounds and typically reach up to six feet in length, not including the tail. Males typically weigh closer to 650 pounds and reach around ten feet, sometimes more. The largest tigers have been documented to weigh an astonishing 800 pounds.

How many Siberian tigers are left in the world today?

Based on previous 2015 estimates, there may be as many as 500 individual Siberian tigers left in the wild. This is out of an estimated 4,000 or so total tigers in the entire world. The Siberian tiger could also conceivably interbreed with the remaining tiger subspecies. However, because the other tigers are located in pockets of territory throughout India and Southeast Asia, the Siberian tiger is heavily isolated in its own corner of the world. This has made the preservation of the tiger species more difficult.

How strong is a Siberian tiger?

There are many ways to measure strength such as running, leaping, and biting force. The Siberian tiger excels at most of these measures. It is estimated that their bite can exert approximately 1,000 pounds of force per square inch. This allows them to quickly kill immense prey such as elk with their jaws alone. They have been known to drag the dead bodies of their prey large distances before eating them.

What eats a Siberian tiger?

A live adult Siberian tiger has few known predators. There have been some documented reports of mature bears killing and feeding on the tigers, particularly the young cubs, but these instances are likely rare and do not represent a normal situation in the wild.

How to say Siberian Tiger in ...