Piranha vs Great White Shark: Who Has a Stronger Bite?

Thanks to horror movies, piranhas and great whites are two extremely popular aquatic creatures. Sadly, as with all horror movies, producers pump a lot of misinformation about the species into scripts to increase the shock and fear factor. Many movies painted these creatures as blood-thirsty animals that go out in search of human flesh – which is far from the truth.

One thing, however, that the movies did get right was how dangerous they can be; both species have killed humans in ferocious attacks. Surprisingly, despite the size difference between the great white and a piranha, studies show that their bite forces aren’t too different, which is both terrifying and intriguing.

Comparing a Piranha and a Great White Shark

What Are the Major Differences Between Piranhas and Great White Sharks?

The major differences between piranhas and great white sharks are their sizes, looks, teeth, and behavior. We address their differences in detail below. You will also find which of these animals has a stronger bite. Let’s go!

Great whites weigh a maximum of 5,000 pounds, while the largest piranha species, the San Francisco piranha, never exceeds 8 pounds. This means that the great white shark can weigh over 625 times more than piranhas.

Similarly, the difference between great white sharks’ lengths and piranhas’ is immense. Great whites could be up to 20 times as long as piranhas.

Great white sharks are apex predators as they have no predators. On occasion, a group of killer whales might be able to take down a great white, but this rarely happens. Great whites are known to prey on sea creatures such as fish, seals, and even other great whites. This doesn’t happen often, but it is a known fact that all shark species may practice cannibalism at one point or another.

Piranhas, on the other hand, are remarkable fish with unique diets. They eat fish, birds, and even snakes. However, these fish also eat fruits and seeds, which makes them an omnivorous species.

While it may seem that the great white’s bite force greatly outweighs that of a piranha, we must consider the body weight of both creatures.

The piranha measured in the study weighed about 2.4 pounds, which means that its anterior bite force was about 30 times its body weight.

In the great white study, researchers assumed that the shark weighed about 7,328 pounds, meaning its anterior bite force was less than 0.3 times its body weight.

The great white is definitely more powerful, but proportion-wise, its bite force isn’t a big deal compared to the piranhas.

It existed about 8 to 10 million years ago during the Late Miocene period. Not much is known about the Megapiranha species due to the few remains scientists have found. However, with the current information available, scientists were able to reconstruct its fossils and create simulations that allowed them to approximate its bite force, and the results were nothing short of jaw-dropping.

The Megapiranha is believed to have had a bite force ranging from 279 to 1,068 pounds per square inch (1,240–4,749 Newtons). This means that this creature had a bite force that was 12 to 48 times its body weight. Once again, this greatly outshines the great white shark.

Piranha vs. Great White Shark – Who Would Win in a Fight?

Despite the piranha’s great bite force, it would be minced meat for a great white, and this is majorly because of its size. Piranhas attack in groups because they are vulnerable to many species that aren’t even close to the great white in size. An example of one of these species is the dolphin.

Consequently, the only way a piranha could have a shot at defeating a great white shark is if they were in a school of close to 1,000 fish. And considering the fact that piranhas move in schools of about 20 to 100, this is very much impossible. They would also need to ensure that they attack at once, so the great white cannot fight all of them at once. However, we’re quite sure that these are battle tactics that piranhas aren’t aware of.

In addition, bite force isn’t the only thing required to win a battle. Not only are great whites faster, but they are a lot more aggressive than piranhas. So while a piranha’s bite force leaves the great white’s in the dust, great whites would definitely win this fight.

Real or Fake: Is This Viral Photo of a Shark Leaping for a Helicopter Legit? 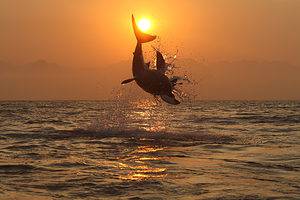