Written by Austin S.
Updated: July 10, 2022
© Daniel Eskridge/Shutterstock.com
Share this post on:
More Great Content:
7 of the Largest Prehistoric Animals Ever…
Discover the 8 Smartest Dinosaurs Ever to…
Meet Every Dinosaur Featured in Jurassic World…
Top 10 World’s Largest Dinosaurs Ever
9 Dinosaurs With Long Necks
Meet the Largest Carnivorous Dinosaur in History…

Dinosaurs are a diverse class of reptiles that dominated the Earth millions of years ago. The dinosaurs’ reign began in the Mesozoic era, about 245 million years ago. However, this reptile group was nowhere to be found at the end of the Cretaceous Period, about a 66million years ago.

The success of dinosaurs was in their diversity.  These reptiles were embedded with various adaptive features, both in shape and size. Their giant body size was their main feature; it made them dominate their environment easily.

The dinosaurs’ giant bodies were streamlined and built with straight hind legs. This architecture bolstered their weight and enabled them to conserve energy for locomotion compared to other reptiles that use their entire body. Also, some dinosaurs had other appendages for particular purposes, such as wings, claws, and steep jaws.

Among these ancient reptiles are the giant Spinosaurid dinosaurs. The largest-ever land dinosaur in Europe. This class of dinosaurs is our focus in this article.

Spinosurids, also known as spine reptiles, derived their name from their sail back due to their tall vertebra spines.

The Spinosaurid dinosaurs were giant bipedal reptiles. These giant predators had faces similar to the present-day crocodiles. Their skulls were narrow, long, and low. Spinosaurids upper and lower jaws were outstretched into a wedge-shaped structure that can be likened to a knot. Their jaws had conical teeth with little or no serrations.

Spinosaurid appendages weren’t left out. They had massive shoulders wielded with sturdily built forelimbs of three-fingered hands with claws.

The large body size of spinosaurids is considered to have emanated from their semi-aquatic lifestyle. This reduced their competition with other dinosaurs for food; thus, all the nourishments they obtained were channeled into building their body.

Spinosaurids’ piscivorous feeding mode was aided by several adaptive structures they possessed. The bony structure of Spinosaurids’ teeth and limbs suggested they had a semi-aquatic lifestyle like the modern-day crocodiles. Their retracted eyes and nostrils helped them underwater. Also, spinosaurids had deepened tails which aided their propulsion in water.

When And Where Did Spinosaurids Live?

Archeologists study the environment based on the location of the fossils and components surrounding the fossils. Spinosaurids are considered to have lived in humid habitats like swamps. The habitats they lived in would have made it easy for them to get their food.

Based on speculations, spinosaurids are believed to have resided in mangroves, shorelines, tidal flats, and other habitats close to the shore.

Threats And Predators Of Spinosaurids

However, in instances of drought or the search for food, Spinosaurids must have gone at loggerheads with other giant dinosaurs that shared the same diet if they crossed each other’s path.

Where Were Spinosaurid Fossils Found?

In 1820, British paleontologists discovered a single conical tooth that belonged to a spinosaurid in Wadhurst Clay Formation. This was the first Spinosaurid fossil to be discovered. However, its spinosaurid nature wasn’t ascertained until 1998.

Spinosaurid fossils were also discovered in the Bahariya Formation in Egypt in 1912. These fossils were identified by their vertebrae, skull, and teeth fragments. These remains served as the basis for the classification of other specimens that were discovered in later years. German paleontologists initially referred to these fossils as ” Egyptian Spine Lizards” due to the peculiar spiny nature of their vertebrae.

A milestone was attained in 1983 when British paleontologists unearthed an almost complete skeleton of a spinosaurid in Surrey, England. Paleontologists described this Spinosaurid fossil as a new species called Baryonyx walkeri.

In 2004, jaw bones belonging to Spinosaurid were discovered in the Alcântara Formation, a geological formation in Brazil which dates back to the late cretaceous period.

The most recent discovery of Spinosaurid fossils was in 2021. The remains of a new species of Spinosaurid were found in the Isle of Wight, an island off the south coast of England. This fossil is about 10m long. These ancient bones of spinosaurid were discovered in the Vectis Formation, a geological layer of rock in Compton Chine.

Spinosaurid fossils have also been discovered in Morocco, Niger, Thailand, Spain, and Portugal

When Did Spinosaurids Die Out?

The environmental hazards of this period must have made the living unsuitable for these giant predators. The global warming that resulted from the Cretaceous Period could have caused the water bodies to dry up, which equates to less or no food for the Spinosaurids. Lack of food could have led to their extinction.

Another probable cause of their extinction is the massive asteroid that hit the earth after the Cretaceous Period. This asteroid is believed to have caused the extinction of most living things in that era, including the Spinosaurid dinosaurs. The impact of the asteroid, as well as the dust and debris falling to the Earth, must have triggered a widespread wildfire.

Allosaurus are giant carnosaurian theropod dinosaurs that lived about 155 to 145 million years ago during the Late Jurassic epoch. This dinosaurs were large bipedal predators. These giant reptiles were about 32ft long and had large skulls with sharp teeth.

Tyrannosaurus was a giant predatory carnivorous dinosaur that lived during the upper cretaceous period. It had a massive skull and large body supported by powerful and large limbs. Most tyrannosaurus were about 41ft long and weighed about 14 tons.

Velociraptors are feathered dinosaurs that existed about 75 to 71 million years ago during the Late Cretaceous period.

They were bipedal and feathered dinosaurs with a prominent tail and crescent-shaped claw on each hindfoot for defense and attack. Velociraptors also had long and low skulls.

Giganotosaurus was one of the largest known terrestrial carnivores, with its teeth compressed sideways and with serrations. The neck was strong and the pectoral girdle proportionally. The complete specimen of Giganotosaurus ranges from 12 to 13 m (39 to 43 ft) and weighs 4.2 to 13.8 t (4.6 to 15.2 short tons).

Here are some interesting facts about Spinosaurids;

After some research and reasoning, it was discovered that the spiny structures of  Spinosaurid dinosaurs had a function. Some of the spines had a vertical height of about 5ft. Each spine had a bone and few blood vessels. The arrangement of the spines formed a sail on the back of Spinosaurids.

Scientists believe these long spines allowed the Spinosaurids to navigate easily in water. Also, the sails were used to store fats and regulate body temperature.

Shortly before World War I, Ernst Stromer, a German paleontologist, discovered some remains of Spinosaurids in Egypt.  These remains were transported to and kept at the Deutsches Museum in Munich, Germany.

During World War II in 1944, the British Royal Air Force conducted an Allied Bombing raid that destroyed several things, including the fossils in the Munich museum. This made it arduous for paleontologists to carry out more research on Spinosaurids.

When did the Spinosaurids Live?

Spinosaurids were giant predators. They weighed about 31,000 pounds and could reach lengths of about 50ft

Watch This Ocean Ray Try His Hardest to Be a Bird 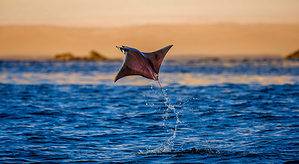