A name can hold a lot of meaning — but in the case of the moose, its name hides the secret behind its diet. The word moose comes from the Algonquin language and translates into English as “eater of twigs”. It’s a fitting description for an ungulate that snacks primarily on a diet of bark, twigs, leaves, and pine cones. Moose have a preference for fir, aspen, and willow trees — and since young trees offer the best nutritional content, healthy moose populations can often be found in habitats that have recently suffered from forest fires.

But decently sized bodies of water are also a necessity for most moose. Winter deficiencies ensure that moose need to ingest a lot of sodium during the more verdant months, and the vegetation found in lakes, ponds, and rivers is packed with high salt levels. Let’s take a deeper look at the diets of these giant creatures to discover just what moose eat!

Moose are herbivores that eat bark, grasses, leaves, and shrubs. Moose are generalist herbivores that in summer months eat mostly aquatic plants, deciduous leaves, and forbs. As food supplies tighten during the winter they’ll consume more twigs, shrubs, and needles. These winter food sources aren’t nearly as nutritious as what moose eat during the summer, but surviving in Northern climates across the winter requires adaptations!

Moose eat a diet that includes:

The Background on Moose

There are four different moose subspecies that stretch all the way from Colorado in the south to Alaska in the north. And while their heavy coats necessitate cooler habitats, that also means that food is often scarce and nutritionally barren — a particularly immediate concern considering that the average male moose weighs between 900 and 1,500 pounds and can eat 40 to 60 pounds of vegetation in a single day. They can spend as much as eight hours a day gathering enough food to satisfy their appetite.

To help accommodate for the steep nutritional requirements of the world’s largest deer species, the moose has evolved a highly efficient digestive system. Like cows, a moose has a four-chambered stomach that allows them to regurgitate partially digested food and then chew on this cud to get every ounce of nutrition possible from it.

How Do Moose Forage?

Moose is what’s known as a generalist herbivore, which means that they can get their nutrition from a wide range of different sources. This is in contrast to specialist herbivores like the panda bear and koala — animals that subsist almost entirely on bamboo and eucalyptus respectively. Specialist herbivores are highly dependent on their existing ecosystem and are especially threatened by habitat destruction. Generalists like the moose can — and often have to — rely on a more diverse diet.

A typical moose’s diet might include food foraged from as many as 20 different types of trees and shrubs, but studies on the droppings of moose revealed that they’re highly selective about what food sources they prioritize. Moose will typically prioritize plant sources that are rarer for their habitat — a curious habit that suggests moose prioritize general nutritional diversity rather than pursuing one plant or another in particular. It’s also been hypothesized that a diverse diet reduces the risk of eating toxic plants in lethal doses.

The average moose towers between five and seven feet tall, and they feed on the bark, twigs, and leaves of trees because they have difficulty leaning over to reach the grass at their hooves. The lips of a moose are an incredibly delicate tool crafted to suit its dining habits. Its prehensile nature is designed for stripping bark, reaching high branches, and even evaluating the age of tree shoots. Moose will often graze for plants in shallow waters, but sometimes reaching the most nutritious food sources means diving as deep as 20 feet. Their uniquely oversized noses can block the nostrils, preventing liquid from getting in while the moose eats its meal entirely underwater.

The sheer size of the moose makes them one of North America’s most dangerous herbivores. The enormous antlers of the males are intimidating, but the hooves of a female can easily end the life of even a fully grown grizzly bear. Moose further reduce the odds of being attacked by controlling their environment. They graze often in bodies of water and are actually capable of swimming for miles at a time and reaching a speed of 30 miles per hour in the water. Unfortunately, there are dangers on the water as well. While rare, there have been instances of orcas devouring moose that venture out too far in open waters.

Almost all attacks on moose are orchestrated by black bears, grizzly bears, and wolves. Both bears and moose are solitary predators, but even grizzlies are usually reticent to attack moose unless the bear is very hungry or the moose is sick, wounded, or either very old or very young. Thanks to their pack tactics, wolves pose a much larger danger.

In fact, many wolf populations would be decimated without populations of moose to prey on — as this large game can feed a whole pack. The danger of wolves is so great that female moose raising calves will often neglect their own nutritional content for the sake of protection. Females on Lake Superior have been seen retreating to smaller islands to raise their cubs, islands that have no wolf populations but also have barely any vegetation.

Another predator to the moose is the parasitic brain worm. While foraging for plants, they may accidentally eat the parasite via snails. The droppings of white-tailed deer, who are immune carriers, may contain the parasite. Then, it can get transferred to land snails, which moose may ingest unknowingly.

What Do Moose Eat in the Winter?

The size, heavy coat, and absence of sweat glands necessitate that moose live in climates that are relatively cool throughout the seasons. Unfortunately, the ecosystems they live in are typically cold, frigid, and buried in snow during the worst of the winter season. To accommodate for this expected period of famine, moose employ a similar practice to bats and bears — bulking up so they can live off their excess fat during the leaner months.

The average moose will bulk up by a quarter of its normal weight to prepare for the winter. As leaves, fruit, and nuts wither and die, moose are left to rely on more nutritionally barren twigs to survive. But while the lack of suitable food is a problem, it’s one that’s further compounded by the additional energy needed to forage. This is where that added fat is especially advantageous. The available food in winter often yields only a third of the same nutritional value of equivalent food in the summer and spring. And while moose don’t hibernate in the conventional sense, they often have to determine whether foraging will expend more energy than they recover through their meal. Fortunately, moose have developed a highly insulated coat that helps regulate their body temperature and minimize their energy usage. 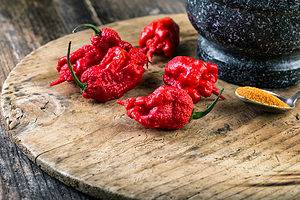 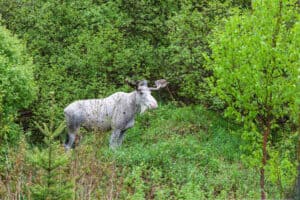