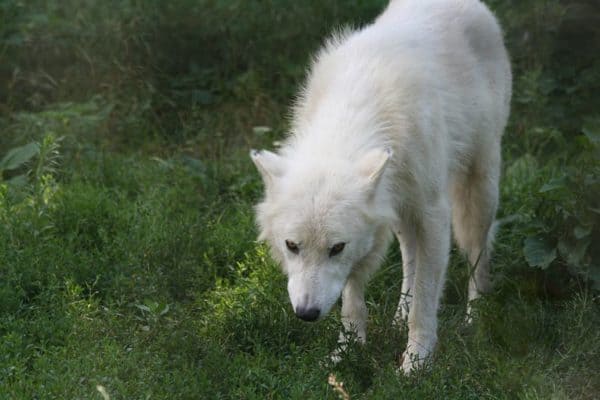 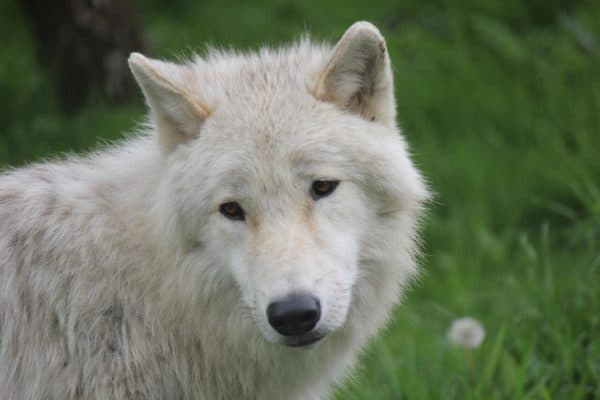 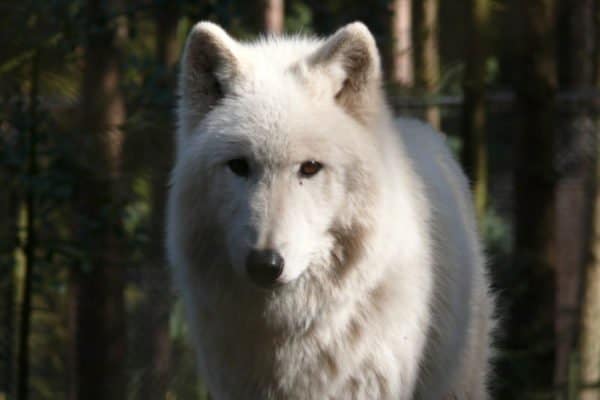 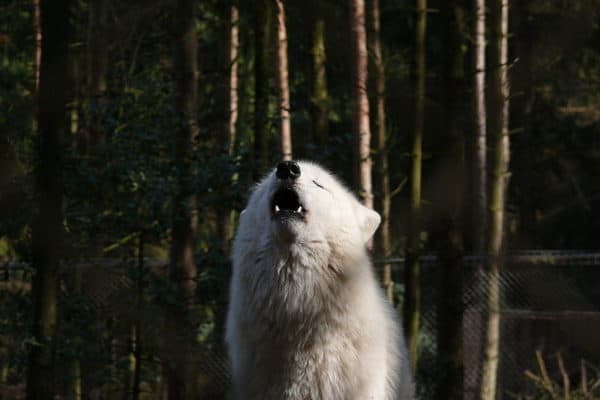 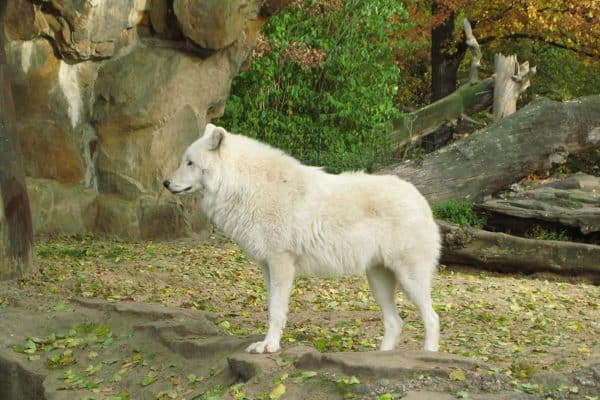 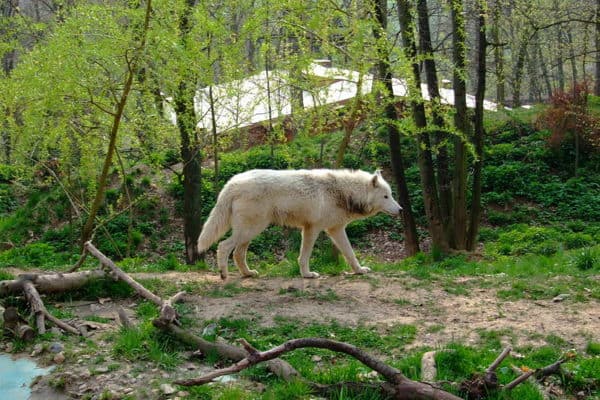 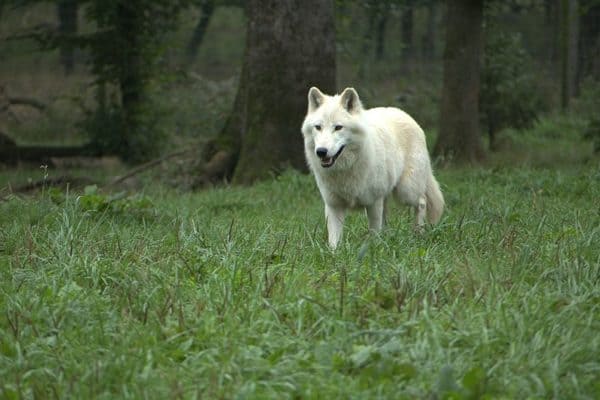 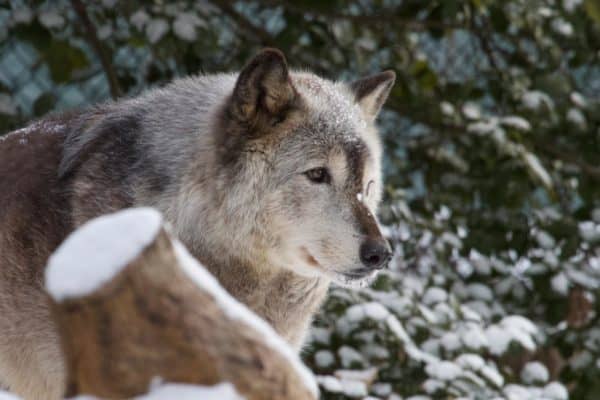 “An Arctic wolf makes its home in places where the temperature can drop well below freezing.”

Arctic wolves live in Greenland, Alaska, Iceland and Canada. But, these wolves live in caves and not dens like other types of wolves. Their short noses and small ears help to maintain their body heat on the tundra. The territory traveled by an Arctic wolf can add up to hundreds of miles.

• These wolves travel in groups or packs of about six

• They live about 7 years in the wild

• They have a thick, white coat that’s insulated against very cold temperatures

Arctic wolf is the common name of this mammal though it’s sometimes called a polar or white wolf. Its scientific name is Canis Lupus Arctos. It belongs to the Canidae family and its class is Mammalia. Its scientific name Canis means dog while lupus means wolf. The word Arctos refers to a polar region. The Arctic wolf doesn’t have a subspecies, but it is a close relative of the grey wolf.

An adult Arctic wolf can weigh between 70 and 125 pounds. A 70-pound wolf is equal to the weight of 4 adult Dachshunds. They range between 2 to 3 feet tall and can be up to 5 feet long including their tail. Think of the average Christmas tree. An Arctic wolf’s body is about three quarters as long as that tree.

The white or sometimes grayish coat of this wolf has two layers. The upper layer gets thicker as the temperature drops in the tundra. The layer of fur closest to the wolf’s skin is waterproof. The waterproof layer of fur helps this wolf to stay dry and maintain its body heat in subzero temperatures.

Along with their insulated fur coats, Arctic wolves have paws with thick pads allowing them to walk on frozen ground. Plus, these pads give them traction on the slippery surfaces they walk and run on. Arctic wolves run while hunting muskoxen or other prey. The fastest recorded speed of an Arctic wolf is 46 mph.

You may think of a wolf as a solitary animal, but Arctic wolves travel in packs of six or so. These wolves live in incredibly cold climates, so they rarely encounter people. Normally, people don’t want to travel to these cold places! They are not aggressive animals unless they are defending their territory from a wolf or another animal.

Arctic wolves live in northern Canada, Greenland, Alaska and Iceland. They live in these Arctic regions year-round. Furthermore, these regions have dark periods that last about 5 months. So, Arctic wolves have adapted to living in the dark as well as the cold. Instead of living in dens in the ground, Arctic wolves live in caves or seek shelter in outcroppings of rocks. The ground in these Arctic areas is always frozen making it impossible for them to dig traditional dens.

What do Arctic wolves eat? Arctic wolves eat Arctic hares, caribou, lemmings and muskoxen. An Arctic wolf is smaller than its close relative, the gray wolf. So, you may be wondering how a single Arctic wolf could hunt and kill large mammals. The answer is: They don’t hunt alone. A pack of wolves will work together to single out a weak member of a herd of caribou or muskoxen to capture. A large mammal will be eaten by a pack of wolves over the course of a week or so. An Arctic wolf is able to eat about 20 pounds of animal meat in one feeding period. Think of 20 pounds of meat as weighing the same as two big gallon cans of paint.

Polar bears are the only animal predators of Arctic wolves. If a young wolf cub wanders out of the cave, it can be killed by a bear or another wolf. When humans venture out to where the Arctic wolves live, they pose a threat to them as well.

An Arctic wolf can survive for 4 or 5 months without eating. It can survive on fat stored in its body. But, it must eventually have nourishment in order to survive this harsh climate. If a wolf is in a weakened condition due to hunger, it may be attacked by other wolves.

The official conservation status of the Arctic wolf is: Least Concern. Because they live in such a harsh environment, they are not endangered or threatened by hunters and their habitat is not at risk.

In a pack of Arctic wolves, only the alpha of the pack will mate with the beta female. Arctic wolves are known to stay with one mate. This helps to control the number of wolf pups also called whelps, so there will be adequate food available to them. The gestation period is 63 days and the mother gives live birth to 2 to 3 wolf pups. Newborn pups have dark fur and blue irises that change to yellow as they grow older. They weigh about 3 to 4 pounds when they’re born, but quickly start to gain more. Arctic wolves give birth later on in the month of May and sometimes early June. This is different from gray wolves. Gray wolves give birth in the month of April and usually have 4 to 5 pups in a litter.

They are born with their eyes and ears closed, but are able to see and hear within about 12 to 14 days. The pups can crawl around a bit especially when they want to nurse from their mother. In a few weeks, the pups start to nibble on small pieces of chewed food brought to them by their mother.

Arctic wolf pups stay in the cave or den with their mother for about 6 weeks. After 6 weeks, they join in the activities with the pack and are full-grown adults by 8 months. Generally, grown pups stay with the same pack for years.

The average lifespan of male and female Arctic wolves is about 7 years in the wild and 20 years in captivity. One of the most common reasons for the early death of an Arctic wolf is a lack of available food in the harsh climate. There may be a limited amount of food and that’s taken by the alpha male and beta females in a pack. Another reason for early death is injury. An Arctic wolf may be injured during a hunt and the injury can become infected. Though there is no recorded age for the oldest Arctic wolf, the oldest known wolf in the world is a Canadian wolf named Maddie. She is 19 years old and grew up in a wolf sanctuary.

The population of Arctic wolves is about 200,000. They are not considered to be a threatened species and are officially listed as Least Concern. The main reason that Arctic wolves aren’t threatened is they live on the frozen tundra where very few humans travel and where very few other animals can survive. One of the largest populations of these wolves is found in northern Alaska.

Arctic wolves are carnivores. These wolves live in areas where the temperatures can drop well below zero. This makes it difficult for plants and other vegetation to grow. So, Arctic wolves must eat the prey that’s available to them in their frozen environment. Peary caribou, muskoxen, lemmings and Arctic hares are all food sources for Arctic wolves.

How many Arctic wolves are left in the world?

There are approximately 200,000 Arctic wolves left in the world today.

Can you have an Arctic wolf as a pet?

No. It’s never a good idea to keep a wild animal as a pet. This is especially true for an Arctic wolf. Even if someone were to find a cute Arctic wolf pup, they must remember that the pup will grow into an adult wolf. It will someday weigh around 130 pounds and develop strong jaws made to eat large mammals on the tundra. If a wolf is brought up in captivity, it should be in a zoo or wolf sanctuary where experts know how to care for it safely.

Arctic wolves are not dangerous unless they feel threatened. These wolves mark their territory and can become aggressive if other wolves or people are trespassing into that territory. Otherwise, these wolves like to stay hidden while traveling with the other members of their pack.