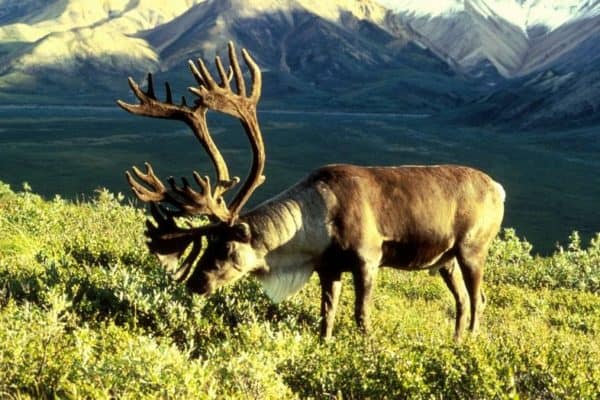 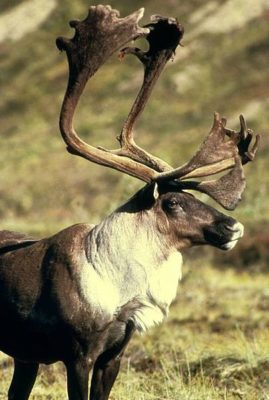 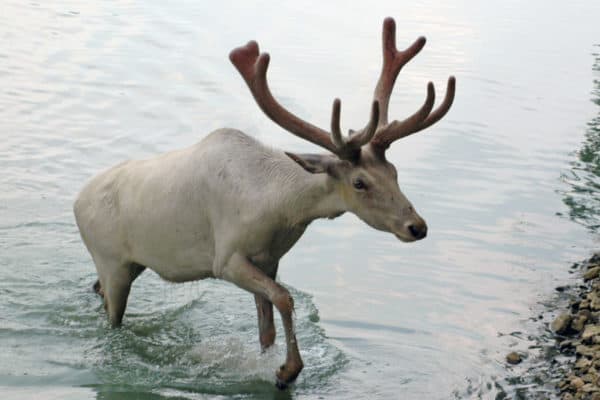 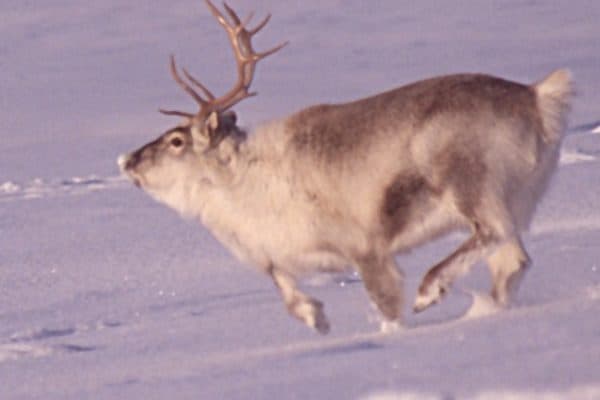 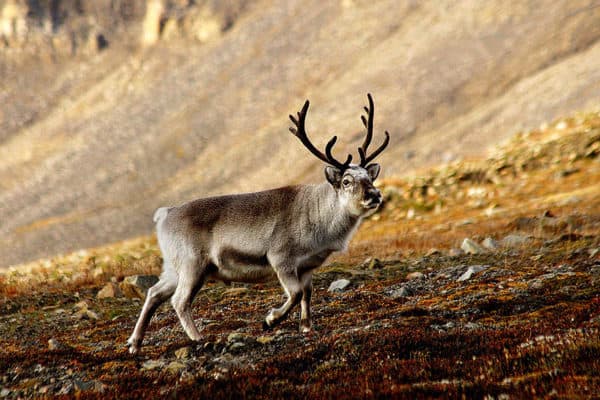 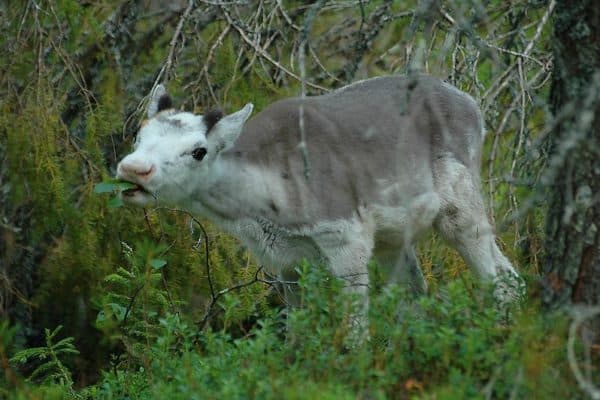 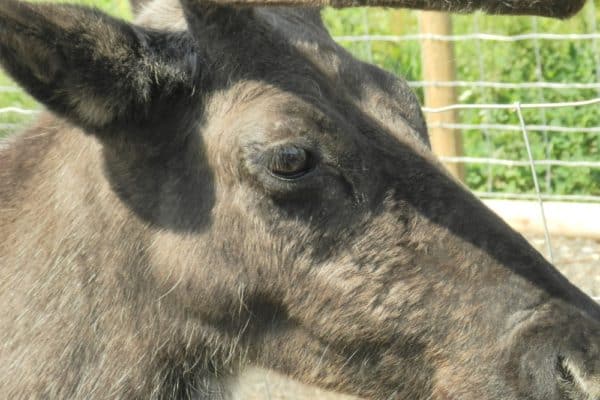 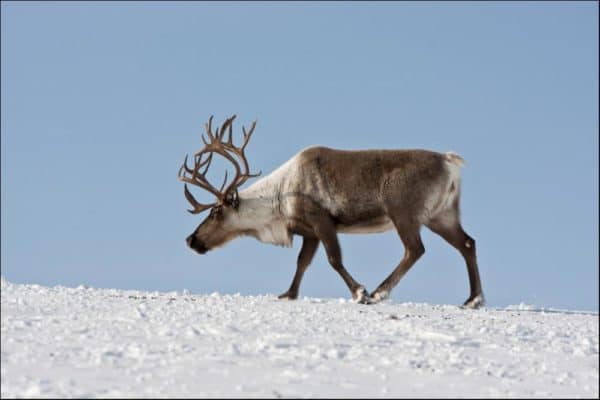 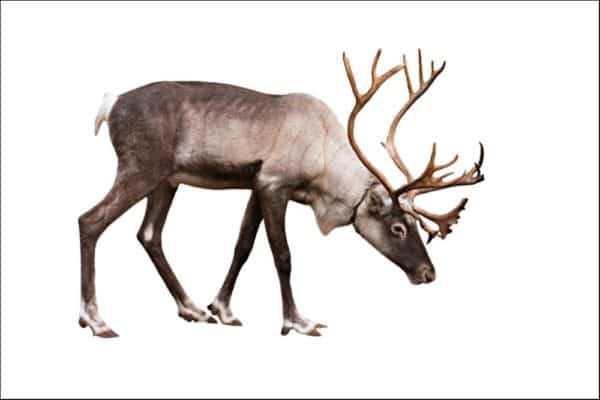 The reindeer has become somewhat of a whimsical creature. Tales of ability to fly to pull Santa’s sleigh and other such stories have made them a fun focus for people both young and old. However, there is much to learn about this large animals that are found in the colder climates around the world.

Reindeer are one of second largest species of deer behind the caribou. These animals are known to cover as much as 3,100 square miles of land space during their travels throughout the year. Traveling in herds, the reindeer can be very protective of other members within their group. For the most part, the reindeer is a gentle and relaxed creature.

Scientific Name for the Reindeer

Physical Features of the Reindeer

While there are different types of reindeer that can vary in size from one species to another, the common reindeer stand an average of 4 feet at the shoulders. These animals can grow to be six feet long. This is the same length as a twin-size bed.

To protect them in the cold Arctic conditions in which they live, reindeer have thick fur that covers their entire body. This fur is made up of hollow hairs that allow for air to be trapped and heated to keep the reindeer warm. This insulated hollow hair also give the animal more buoyancy in the water to float when necessary. This feature makes river crossings much easier during migrations. Reindeer fur can be one of many shades of brown a light beige color. White patches are found on the chest, belly, neck and areas above the hooves.

The hooves of a reindeer are useful tools that are important for their survival. The hooves are wide in size. In the winter the hooves are hard, allowing the reindeer to cut into the snow and ice for traction. In warmer season the hooves of the reindeer become softer and allow for easier swimming and gripping in the mud. There is a distinguishable sound created when the tendons rub across the bone of the hooves. 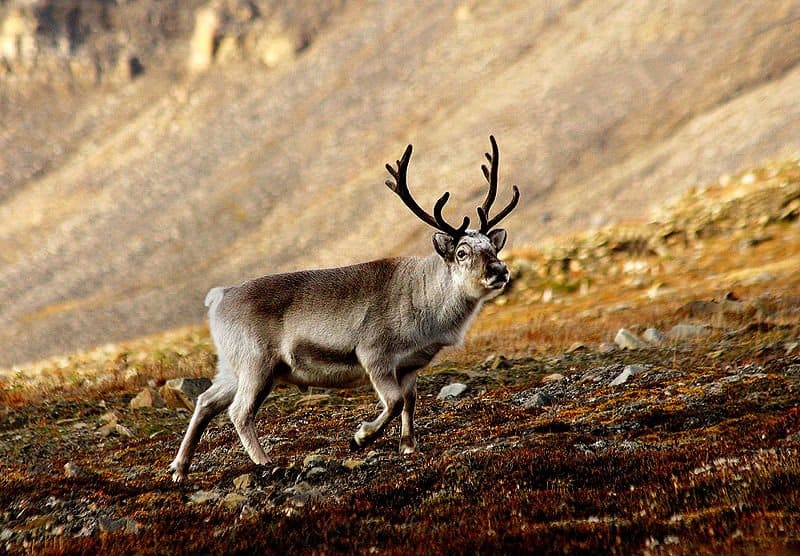 Behaviors of the Reindeer

Reindeer can run up to 50 miles per hour! Beyond being fast sprinters, reindeer are also migration champions. The animals are known to travel more than 3,100 miles in a single year - the same length as the self-transcendance race, the world's longest certified footrace.

The reindeer travel in large packs that can contain tens of thousands of animals at any given time during the summer months. These groups are known as a herd. Scientists believe that this provides relief from mosquitoes, warble flies, and nose bot flies that can become bothersome to the reindeer. When the weather begins to cool off, the herd starts thinning out. During this time the herds can dwindle to as little as having just ten members at a time. This often occurs during the rut season that takes place in the fall. It is also the time when breeding most often occurs in the herd.

You will find the reindeer living in polar and Arctic climates. Most reindeer are found in the northern hemisphere. Herds have been spotted in Europe, Asia and North America. The animals prefers forests as these spaces are filled with the food resources that the animal needs for survival. The thick cover of trees such as pines, spruce and other conifer trees give the reindeer places to bed down. These trees offer some protection from the weather elements and from being easily spotted by predators.

Location of Reindeer Subspecies Around the World

There are six main subspecies of the reindeer known to roam the Earth today. These include the following:

Classified as herbivores, reindeer live on diets of plants and vegetation. Some of the favorite foods of the reindeer include willow and birch leaves, mushrooms, sedges, cotton grass, and ground dwelling vegetation. The animals do enjoy fruits and berries when available. However, while these foods are okay as a treat, eating them in abundance is not healthy for the reindeer.

During colder seasons when plants and vegetation are limited, reindeer use their keen sense of smell to locate lichen under the snow. Using their hard hooves to break through the snow and ice covering, the animals are able to access this food. Cows will use their antlers in these situations to help gain access to the lichen. On average, a reindeer will consume between 9-18 pounds of food every day.

While it not their first choice in food, reindeer have been known to eat small rodents on ocassion. This gives them the ability to sustain their nutritional needs and fulfill the need for protein and iron in their diets.

Predators and Threats of the Reindeer

Living in the wild, reindeer face the threat of different types of predators. The most common animals the prey on the reindeer include wolves, golden eagles, and bear. However, when killed, other carnivorous animals will consume the meat of the reindeer.

Humans are among one of the biggest predators of the reindeer. They hunt the animals for the meat, hides and fur. The fur is used to create warm clothing for extreme cold weather conditions. The hides are tanned. This creates a waterproof leather material that is ideal for making shoes, tents and clothing.

While domesticated reindeer don’t often worry about predators as being a threat to their livelihood, there are other types of threats that they face. Most reindeer kept in captivity are not provided with the proper type of environment to sustain their type of lifestyle. This can cause the animals to die due to depression, disease and even starvation when the right types of food are not provided.

Breeding season for the reindeer takes place from early October until the end of November. This is known as the Fall rut. The male selects 5-15 females from the herd during breeding season to create a harem. To prepare for this annual event, the male will rub the velvet from their antlers. Their body begins to increase in size with the neck swelling and a mane of hair forming under their neck.

The total gestation period for a reindeer pregnancy is 228-234 days. To prepare for the birth of their babies, the cows leave their herd and travel to a common calving ground in the Spring. It is common for the mothers to give birth to one calf at a time. There are rare instances in which twins are born to the mother. This is the only litter the female reindeer will have for the year.

Calves suckle for the first week of their life. Solid foods are added to their diet after this period. By two weeks of age, the babies most often double their birth weight. Weaning begins for the baby at about six months of age. However, the babies will stay with their mother for the first year. The average life expectancy for the reindeer living in the wild is 15 years. This duration of time is even less for domesticated animals as they lack the same stimulation as what is found in their natural habitats.

There are 2.1 million reported reindeer and caribou herds that live in different regions around the world. This is less than half of the population reported in 1996. At that time researchers estimate that 4.7 million herds roaming the Earth.

The decline in population has many causes. For one, the environments in which the reindeer depend of for shelter and food are diminishing with ongoing human development. Increases in wolf and bear populations also creates more of a threat to the animals. Lastly, human hunting for furs continues to be a threat to these anmals.

Why do we call them reindeer?

Reindeer are one of the largest species of the deer. The name “Reindeer” is an adaption of an Old Norse word known as hreindyri. The word “dyr” means animal. The term “hreinn” when used by itself references a horned animal.

The horns found on both male and female reindeer are important features to the survival of the reindeer. The horns are used to dig through thick snow and ice found in the tundra where the animal lives. They are also used in battling off competing animals from other herds and predators that the reindeer encounter when living in the wild.

What is the difference between a deer and reindeer?

A deer is an animal species. A reindeer is the second largest subspecies within the deer family. There are many differences that can be found when comparing the common deer with a reindeer. Among them, the type of areas in which these animals can be found. Common deer are found in milder climates including all continents except for Australia and Antarctica. Reindeer are found in polar and arctic regions including Europe, Asia, and North America.

The physical features found on the two types of animals vary widely as well. The common deer have thin boney antlers. Only the males have the ability to grow the antlers. This compares to both male and female reindeer, which can grow antlers. Their antlers are wide and span more space from side to side than the width of their body.

What is the difference between caribou and reindeer?

The names reindeer and caribou are often used interchangeably. However, there are many differences that set these animals apart. When considering the idea of reindeer vs caribou it is important to note that both types of animals come from the same lineage. Reindeer were the result of domesticating the caribou. Caribou can be found living in the southern hemisphere while reindeer are more prominently found in the northern hemisphere.

Physical differences are seen between the reindeer and caribou as well. Reindeer tend to be shorter and wider than the caribou. The fur of the reindeer is thicker also. The caribou is known to migrate during season. These animals move make long trips during colder seasons to warmer areas. They make reverse trips when the weather warms up as well.

View all 22 animals that start with R