Have a very short tail for their size! Click through all of our Uakari images in the gallery. 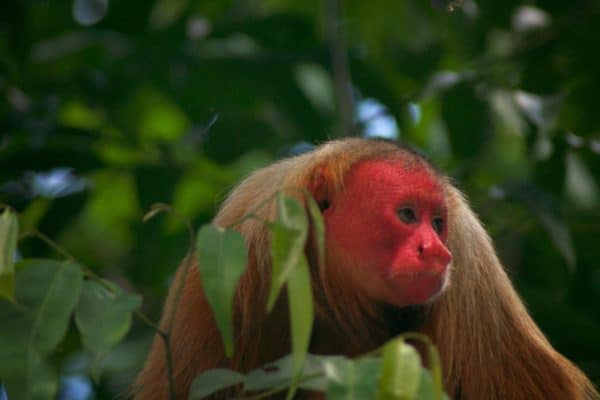 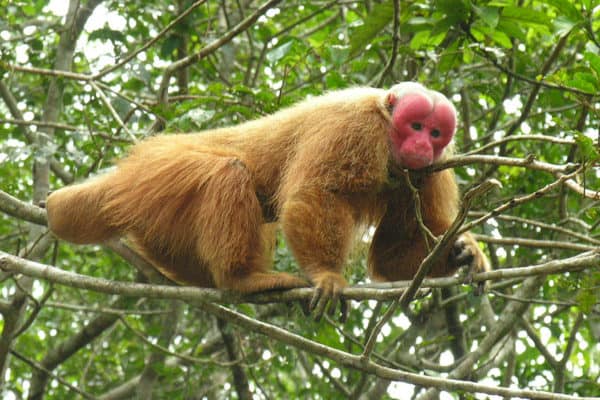 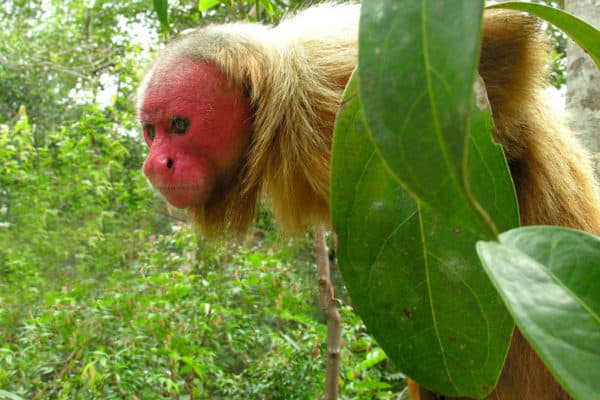 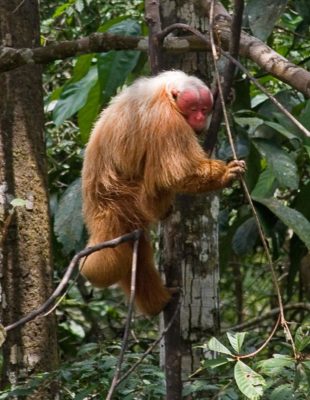 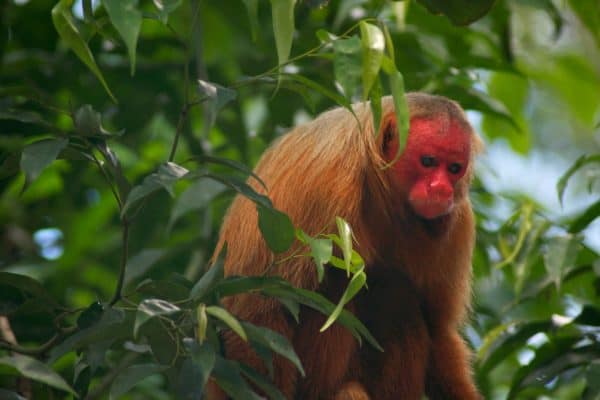 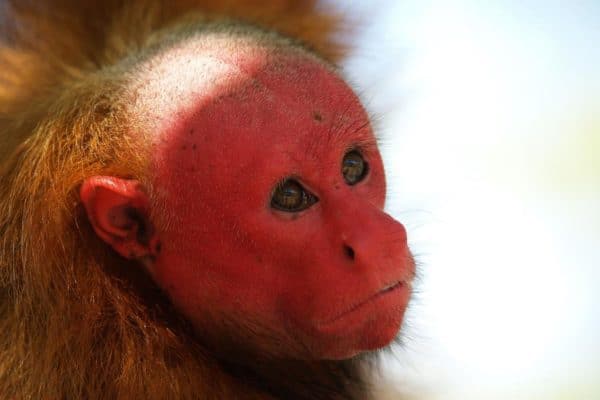 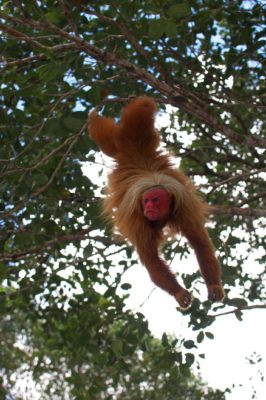 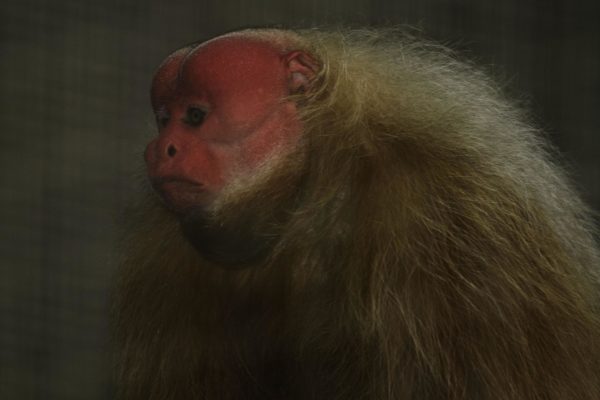 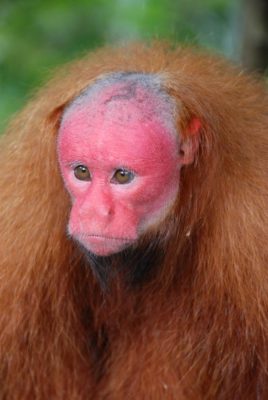 View all of the Uakari images!

The Uakari is a small species of monkey, native to the tropical rainforests of South America, where they tend to be found in moist jungle that is close to water. The Uakari is most well-known for its naked face which most commonly ranges from pink to deep red in colour. There are four distinct species of Uakari, which are the Red (Bald) Uakari, the Black-Headed Uakari, the Ayres Black Uakari and the Neblina Uakari, all of which are very similar in appearance but differ somewhat in fur colour and location. The name Uakari is actually pronounced “wakari”, with both this monkey’s common name and its scientific name thought to have derived from indigenous languages.

The Uakari is a small sized primate growing to an average of 45cm in length, and weighing around 3kg. The tail of the Uakari is very short relative to its body size, and particularly small compared to those of other South American monkey species. The fur that covers the Uakari’s body is long and coarse and tends to vary in colour, from red, to brown, to black, to white, depending on the species. The hairless face of the Uakari is their most distinctive feature, and can be deep red in colour in some individuals (although it generally ranges from pink to red, and can be paler or even black in some species). Their hands and feet are strong and agile with their opposable thumbs allowing the Uakari to hold onto fruits and tree branches.

The Uakari is found inhabiting moist, tropical rainforest only in the Amazon River Basin, throughout Brazil and Peru, and in parts of southern Columbia. The separate species tend to be most easily characterised by their differing locations, and this is also true for the sub-species of the Bald Uakari. The White Uakari is found in north-western Brazil; the Golden Uakari on the Brazil-Peru border; the Red Uakari on the Brazil-Columbia border, with the Pale-Backed Red Uakari being found just a little further east. The Uakari is generally found in jungles that fringe fresh water sources such as streams, small rivers and lakes. They prefer part-flooded forest that is flooded either permanently or on a seasonal basis though, to areas of rainforest that line large rivers.

Unlike numerous other monkey species, the Uakari does not use its short tail to hang from the trees or to help it when jumping, although it is still useful for balance. They spend much of their time high in the canopy and jump from tree to tree just using their strong arms and legs. Like many primates however, the Uakari is known to walk on all four limbs on its rare trips down to the forest floor. The Uakari lives in troops in their jungle environment that usually contain between 10 and 30 members (although they can be up to 100 strong), which are males, females and their offspring. Although they spend much of their time together in the trees, when it comes to looking for food, the Uakari troop breaks up into smaller groups to forage.

The Uakari tends to breed between the months of October and May, when the females release and attractive scent to attract a mate. Once mated, the female Uakari gives birth to a single infant, after a gestation period that is still unknown, but she can do so every two years. The baby Uakari’s are incredibly small and vulnerable at birth, clinging to their mother for their first few months, and feeding only on her milk. They are weaned at an average age of four months old when they begin to forage with the troop for soft fruits and seed pods. The Uakari tends to live for about 20 years in the wild, but population growth rates are not particularly fast as the females can’t breed until they are three years old, and the males when they are six.

Like many other primates, the Uakari has an omnivorous diet and therefore consumes a combination of both plant material and small animals. Despite this, the Uakari primarily eats fruit from the surrounding trees, along with leaves and Insects to supplement their diet. The Uakari gets the majority of its food from high up in the canopy but will forage on the forest floor for seeds, roots and Lizards when food is scarce in the trees. Due to its predominantly fruit-based diet, the Uakari plays a vital role in it’ s native eco-system through the spreading of seeds throughout the forest.

Living high up in the forest canopy, and occupying these areas in sometimes quite large groups, the Uakari has few predators with the biggest threat being Birds Of Prey. Other tree dwelling species such as Snakes and larger Monkeys also prey on the Uakari, and more particularly, their young. Humans are however, the Uakari’s biggest threat as they have been hunted for food by the native people through much of their natural range. The rainforest habitat of the Uakari is also under threat due to high levels of logging for the timber industry throughout the Amazon Basin.

Despite not having an incredibly long tail to clutch onto branches with, the strong hind legs of the Uakari enable them to be able to jump staggering distances. Jumping on their hind legs between branches, the Uakari can jump up to 20 meters from tree to tree. The coloured, naked face of the Uakari is by far their most distinctive feature but the exact reasoning for this bright colouration is not really known. Theories range from mating reasons to being able to spot one another in the forest, but one thing is certain, which is the fact that the face of sick individuals becomes paler and so the skin colour actually acts as an indication of the animal’s health. The faces of those Uakari kept in captivity, are also noticeably paler than they would have been in the wild.

As long as native tribes have inhabited the jungle of the Amazon Basin, people and the Uakari have been known to one another. Until recently, the Uakari was seen by many indigenous people as a stable source of food, and they have been regularly hunted by them primarily using poison-tipped darts. Many were also captured by local people to be kept as domestic pets or even sold on. The Uakari is now also under threat from Humans, mainly from deforestation either for commercial reasons or to expand already growing human settlements. Enormous stretches of the Amazon are still cut down on a daily basis, meaning that many of the native species (and people) lose their homes.

Today, although the different Uakari species are all classified by the IUCN slightly differently, they are generally considered to be animals that are Vulnerable in their natural environment. Hunting by indigenous people and habitat loss to logging, are thought to be the two main reasons for their ever-declining population numbers, as they are now found in smaller and more isolated pockets of their natural habitats.

View all 4 animals that start with U

Are Uakaris herbivores, carnivores, or omnivores?

Uakaris are Omnivores, meaning they eat both plants and other animals.

What Kingdom do Uakaris belong to?

Uakaris belong to the Kingdom Animalia.

What phylum to Uakaris belong to?

Uakaris belong to the phylum Chordata.

What phylum to Uakaris belong to?

Uakaris belong to the phylum Chordata.

What family do Uakaris belong to?

What order do Uakaris belong to?

Uakaris belong to the order Primates.

What type of covering do Uakaris have?

Uakaris are covered in Fur.

What genus do Uakaris belong to?

In what type of habitat do Uakaris live?

What are some predators of Uakaris?

Predators of Uakaris include hawks, snakes, and humans.

How many babies do Uakaris have?

The average number of babies a Uakari has is 1.

What is an interesting fact about Uakaris?

The Uakari has a very short tail for its size!

What is the scientific name for the Uakari?

The scientific name for the Uakari is Cacajao.

What is the lifespan of an Uakari?

What is a baby Uakari called?

A baby Uakari is called an infant.

How many species of Uakari are there?

There are 4 species of Uakari.

What is the lifespan of an Uakari?

What is a baby Uakari called?

A baby Uakari is called an infant.

How many species of Uakari are there?

There are 4 species of Uakari.

What is the biggest threat to the Uakari?

The biggest threats to the Uakari are hunting and habitat loss.

How many Uakaris are left in the world?

The population size of the Uakari is unknown.