There are more than 3,000 known species! Click through all of our Sea Squirt images in the gallery. 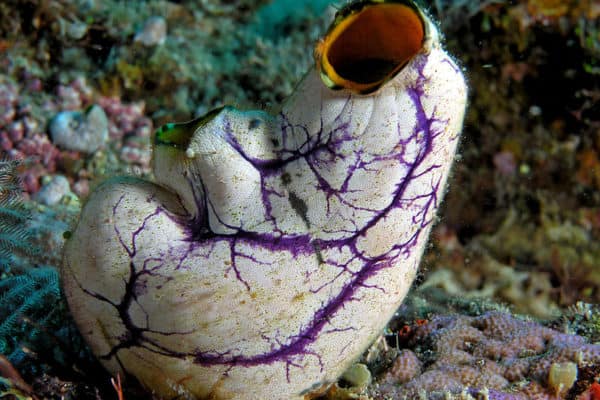 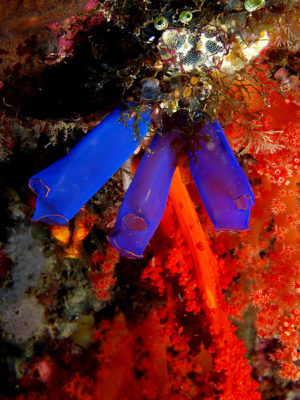 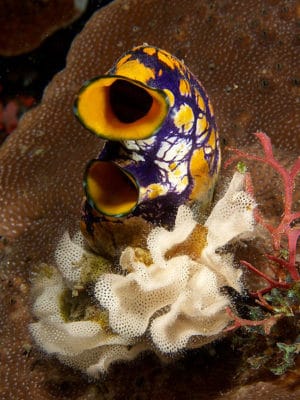 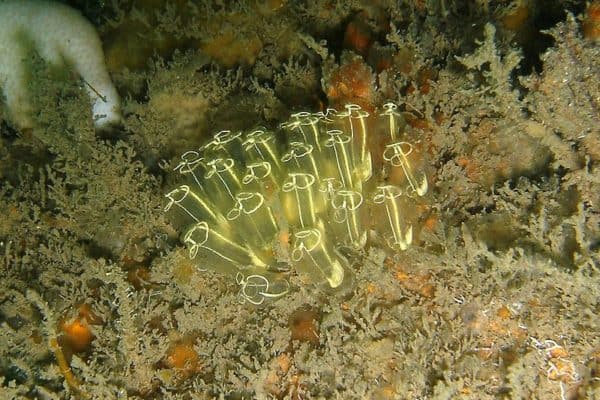 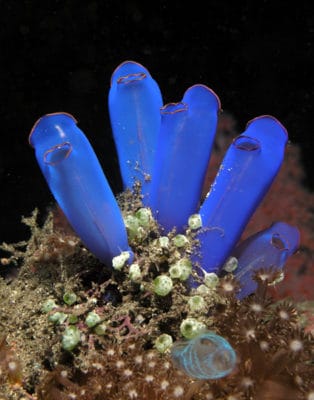 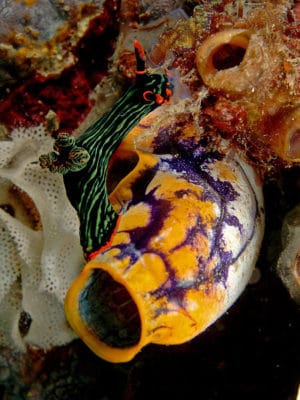 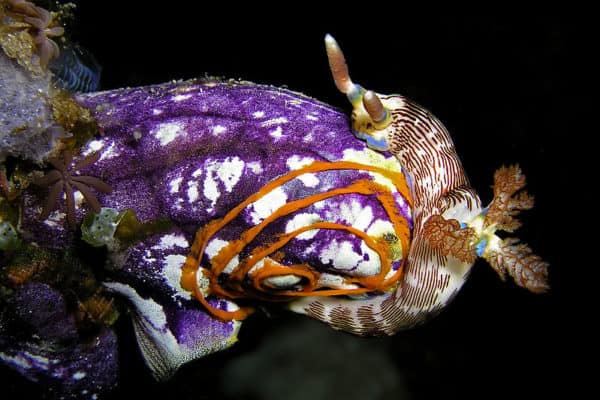 View all of the Sea Squirt images!

The sea squirt is a highly evolved marine animal with a spine, although it looks like a plant.

The sea squirt is a potato-shaped marine animal that also looks like a tube. Most sea squirts live underwater, permanently fixed to a hard surface. But some can move up to 1.5 cm per day. They can live on places like a ship’s hull, rock, back of a large crab, seashell, or the pilings of a pier. Sea squirts are animals that can live alone or in a colony.


Another name for the sea squirt is ascidian. These animals belong to the invertebrate class Ascidiacea, phylum Chordata and subphylum Urochordata, also called Tunicata. The first known use of the sea squirt term ascidian was in 1823. This name comes from the New Latin ascidia with Greek roots of askidion and askos, meaning wineskin or bladder. More than 2,300 subspecies exist, living in saltwater environments around the globe. From its subphylum name Tunicata, sea squirts are also often called tunicates.


There are more than 2,300 types of these animals. These range in color from fleshy beiges, whites, and browns to deep blues, purples, yellows, pinks, and greens. Colors, shapes, and sizes vary according to the subspecies and environment in which they live. Common shapes for ascidians include the more common tube shape, along with round, bell-shaped, and urn-shaped bodies. Their sizes range from 0.5 cm to 10 cm.

One of the more interesting sea squirts is the Polycarpa aurata, which looks like a purple and yellow animal’s heart. That is why people call it the ox heart ascidian. Another intriguing type is the skeleton panda sea squirt. It gets its name from white tissues that form the appearance of a spine and skull with eerie panda-like facial features.

These animals can thrive in any depth of the sea. You can find them from shallow depths of intertidal zones to the deepest and darkest ocean waters. They live alone, attached to a hard surface, or in clumps or colonies. In a colony, each individual sea squirt is called a zooid. In some colonies, the zooid bodies fuse together to form one unit. Other colonies feature defined individuals independently flowing in the current.

One end of the tubal or rounded animal’s body attaches firmly to a solid surface. This attaching end features pits or ridges, sometimes with root-like tentacles that help the ascidian grip onto the base. The rest of the body features a smooth but thick leathery tunic made of cellulose, proteins, and calcium salts. But this tunic is not a dead shell. It is living tissue, often supplied with blood.

On the opposite end from the base of the sea squirt are two openings. These openings, called siphons, take in and push out water for nutrition and oxygen. The larger siphon works like a mouth, sucking water into the body and through the abdomen. After taking nutrients and oxygen from the water it takes in, the animal expels the water through the smaller siphon on the top of its body. If the animal is taken out of the water, it can violently push water from both siphons. This is why we call it a “sea squirt.”

Although you cannot see its organs from the outside of its body, the sea squirt has many parts similar to human bodies. These include a pharynx, heart, and reproductive organs. Their bodies also contain connective tissue cords that help it maintain its shape, muscle fibers, and epithelium. They also have nervous systems, digestive systems, and circulatory systems.


These animals live in saltwater bodies all over the world. Most settle onto the substratum of the sea where they live, attaching to rocks and other hard debris or ground. Their colors, sizes, and shapes vary according to their subspecies and native origin. For example, the skeleton panda sea squirt which has markings that look like a panda.

These animals easily attach to ships, then transferring from one body of water to another as the ship travels. This has led to non-native species invading different parts of the world over the past several hundred years. When attaching to the hulls of ships, docks, or shellfish like crabs and oysters, they cause economic problems. It costs both time and money to remove the tunicates from these surfaces. Their colonies also grow very rapidly and can smother native species, damaging the local environment.


These animals get their food and oxygen from the water it takes in through the larger of two siphons, the holes on the top of its body. The water enters the siphon, then passes down the pharynx and through gill slits. If the ascidian lives in deep water, it thrives on plankton from the water. Near the shore, it takes in dead plant and animal debris as part of its diet. After processing the water it takes in for food and oxygen, the animal ejects its waste through the smaller siphon.

They also obtain some nutrients from algae that grow on their bodies. Some larger species of ascidians use tentacles to catch food particles floating past them in the water current. The largest sea squirts can even catch jellyfish and other sea animals as food.


These animals make easy prey for large fish, snails, crustaceans, and eels. Because tunicates spend their lives attached to one surface from a very early age, passing creatures can graze on them at will.

Humans also eat these animals. In Japan and Korea during 1994, 42,000 pounds of sea pineapple sea squirts made it to dining tables. This is the most popular type of ascidian ingested by humans, but other subspecies are also consumed.

These animals are not considered threatened or endangered according to the International Union for the Conservation of Nature (IUCN), making them of least concern in regard to conservation.


These animals have both male and female reproductive organs allowing them to make both eggs and sperm. But it is unlikely for one individual to fertilize its own eggs. Instead, the eggs and sperm are released into the sea for the fertilization process to take place. Fertilized eggs hatch into tadpole-like larvae that swim freely for a short period of time. The larvae find a solid surface on which to attach, then grows into its adult form there.

Colony-based sea squirts can use other methods of reproduction, such as budding. In budding, a bump develops on one animal. It is formed by the DNA from two parents. The bump grows to full size and eventually breaks off, becoming a new animal and part of the colony.

These animals can live for 10 years or more in the wild. Larvae reach sexual maturity within a few weeks of attaching to their permanent location.


These animals live in every saltwater body in the world, where salinity is at least 2.5 percent. Populations continue to thrive for most subspecies, with some invading new regions and destroying native habitats. This invasion takes place via the hulls of ships and on some farmed crustaceans. Sea squirt conservation status is of least concern.

What is a sea squirt?

A sea squirt is a highly evolved animal. It looks like a plant, typically shaped like a potato or tube and attached to a hard surface, such as a rock or pier. But inside the sea squirt’s simple-looking tubular body are intricate systems for digestion, reproduction, and circulation. They also have a nervous system.

Do sea squirts eat their brains?

Sea squirts start their lives as tadpole-like larvae. These larvae go through a metamorphosis of many physical changes. One of these changes involves the reduction of their cerebral ganglion. These ganglion control movement, as they do in a vertebrate brain. Although the sea squirt does not “eat” its own brain, it absorbs the former cerebral material as its body changes to their adult form.

How do sea squirts protect themselves?

Sea squirts make easy prey for many marine animals. Some of these tunicates use chemical defenses to keep predators from eating them. These chemical defenses include taking in a high concentration of vanadium, causing them to have a very low physical pH. They can also produce toxic metabolites in their bodies that harm predators who eat them.

Where do you find sea squirts?

Sea squirts are in every body of saltwater in the world where salt content is 2.5 percent or higher. They thrive on the bottom of the marine habitat, on rocks and other hard surfaces, as well as on crustaceans, docks, and piers, and the bottoms of ships. Because they often dwell on ship hulls, these ships take them from port to port and enable non-native sea squirts to invade new areas.

What Kingdom do Sea Squirts belong to?

What phylum do Sea Squirts belong to?

What type of covering do Sea Squirts have?

What do Sea Squirts eat?

What are some predators of Sea Squirts?

Predators of Sea Squirts include eels, snails, and starfish.

What is the average litter size for a Sea Squirt?

The average litter size for a Sea Squirt is 1,000.

What is an interesting fact about Sea Squirts?

There are more than 3,000 known Sea Squirt species!

What is the scientific name for the Sea Squirt?

The scientific name for the Sea Squirt is Urochordata.

How many species of Sea Squirt are there?

How many species of Sea Squirt are there?