Is the Mississippi River America’s Most Endangered River?

Written by Megan Martin
Updated: September 6, 2022
© EyeTravel/Shutterstock.com
Share this post on:
More Great Content:
What Lives At The Bottom of The…
Discover 6 of the Clearest Rivers in…
How Deep is the Missouri River?
How Deep is the Mississippi River?
The 15 Largest Rivers in the World
What Direction Does the Nile River Flow?

What is an endangered river?

A river can be endangered for two reasons. First, it could be at risk of drying up, either partially or completely. However, it is also possible for a river to be in danger due to ecological reasons. This could be because of pollution, contamination, or human development. Sometimes, a river can become endangered due to natural reasons, such as changes in the landscape that redirected a river’s water supply. Often, however, a river becomes endangered due to human influences, such as dams and pollution.

No matter the cause, however, an endangered river comes with a variety of consequences. Droughts, floods, loss of habitats, species going extinct – these are just some of the things that can occur when a river is endangered.

Is the Mississippi River one of America’s most endangered rivers?

The Mississippi River runs through nearly a dozen states: Minnesota, Wisconsin, Illinois, Iowa, Missouri, Kentucky, Tennessee, Arkansas, Mississippi, and Louisiana. Here, you can find a 30-million-acre floodplain that’s home to hundreds of species, a large percentage of which are endangered. Hundreds of thousands of people rely on the Mississippi River for water, and, in the past, it was one of the greatest areas of transportation.

There are several factors that threaten the Mississippi River and its diverse ecosystem. One of the most pressing concerns, however, is contaminants. While you may only be familiar with microplastics in the ocean, they’ve also made their way into freshwater, including the Mississippi. Everything from nylon to polyester has been found polluting the Mississippi, with the latter being the most common.

And, because the Mississippi watershed covers around 41 percent of the continental United States, runoff pollution is another large concern. Roads, parking lots, golf courses – these are examples of high pollution areas that can run off into the Mississippi River and make it difficult for native species to thrive.

The Top 10 Most Endangered Rivers in America

The Mississippi River is only one of the most endangered rivers in America. Here are nine more rivers at risk in the United States.

The Colorado River is one of the largest river in the United States. At 1,450 miles long, it runs from the northern border of Arizona south into Mexico.

Human dams also play a large role in the changes occurring in the Colorado River. There are 15 dams on the Colorado River that, while important for the humans making their home here, completely change the landscape. Small rivers become lakes, and habitat loss can be a major issue for some endangered species.

The Snake River is a 1,078-mile river that runs from Washington to Wyoming. It also happens to run through Yellowstone National Forest, and it’s a tributary of the Columbia River. In fact, it’s the largest tributary. Back over 200 years ago, Lewis and Clark actually sailed the Snake River during their expedition across the country.

The Snake River also happens to be one of America’s most endangered rivers.

Although the dams built along the Snake River help make it beneficial to humans, it has damaged the salmon populations there. Snake River and the surrounding areas used to be known for their thriving salmon populations. However, the presence of the dams has changed the structure of the river, making it more difficult for adults to return home to spawn. For many, spawning locations have been completely destroyed.

The Mobile River is a section of a much larger river running from Rome, Georgia to its mouth in Mobile Bay. The overall river is known as the Mobile-Alabama-Coosa River system. Although the entire system runs several hundred miles, the Mobile River portion is only 45 miles long. It is known for supporting the largest biodiversity of freshwater snails, with over 100 that endemic (only found in one location) to the Mobile River Basin.

The largest threat to the Mobile River is coal ash. Coal ash, also known as Coal Combustion Residuals (CCR), is the waste leftover from burning fuels, typically for power. Coal ash contains contaminants like mercury, cadmium, and arsenic that are harmful to the environment. One of the most recent threats to the Mobile River is a coal ash pit that is contaminating the water.

As the name suggests, this group of rivers is home to Atlantic salmon. These are important human food sources and also key components of the natural ecosystem. Like with Snake River, the presence of dams on Maine’s Atlantic Salmon Rivers can interfere with the natural patterns of salmon, causing declines n the population.

The threat posed to Maine’s Atlantic Salmon Rivers is not a new one. In fact, in 1999 and 2000, many of the dams on these waters were removed. This helped improve the health and quality of the salmon populations in the area. However, while many dams were removed, the remaining dams are still posing a threat to the health of the rivers themselves as well as the salmon native here.

Agricultural pollution is the pollution of natural areas from any by-products of agriculture. This can include crops as well as livestock. One of the most common agricultural pollutants is fertilizer. The high levels of nitrogen in fertilizer can change the quality of water, making it difficult for native plants and animals to survive.

These very same agricultural pollutants now pose a problem for the Coosa River. As a result, it is one of the fifth most endangered rivers in America.

The Mississippi River is the sixth most endangered river in America. Home to around 870 species, this American river is a vital ecosystem and a significant part of the American wilderness. The largest threats to the Mississippi River are pollution and human development.

The Kern River is a river in the southwest United States, specifically California. The Lower Kern River is the portion that runs from Lake Isabella to the canyons. The entire Kern River is 165 miles long and was previously known as both the Rio de San Felipe and La Porciuncula.

Unlike many of the other rivers on this list, the Lower Kern River is listed as one of America’s most endangered rivers due to excessive water withdrawals. This has lowered the current capacity of the river and threatened many of the native species found here. This also poses a threat to those who rely on the Lower Kern River for water, power, and even recreation and nature appreciation.

The San Pedro River is also at risk due to excessive water withdrawal and pumping. However, it is also at risk due to its loss of protection under the Clean Water Act. The Clean Water Act, also known as the CWA, was established in 1972. Its purpose is to regulate the pollutants in water to ensure that all water in the United States achieves and maintains a certain safe quality.

Like the Nile River, the San Pedro River is a northward-flowing stream that runs from Mexico to Arizona. This river is 143 miles long and has its source in the Sierra Manzanal Mountains. It is this decrease in elevation that allows for the San Pedro River to run south to north instead of north to south.

The Los Angeles River, historically known as the Porciúncula River, is an almost 50-mile-long river found in California. It’s one of the major rivers near Los Angeles. Its headwaters are found in the  Simi Hills and Santa Susana Mountains.

Because of the high levels of pollution in the Los Angeles River, it has been the focus of many conservation acts and groups over the years. This includes more recent events as well, all geared toward helping improve the quality of water in the Lose Angeles River.

Lastly, the Tar Creek is one of the most endangered rivers in the United States, and it is found in Oklahoma. As of 1983, it is a Superfund site. This means that is the focus of many projects, including those hosted by the EPA, dedicated to improving the community by boosting water quality.

The pollution at Tar Creek is the result of years of mining in the area. Heavy metals such as lead, zinc, cadmium, and arsenic tainted the water in the mine before eventually leaking into Tar Creek itself, turning the water acidic. 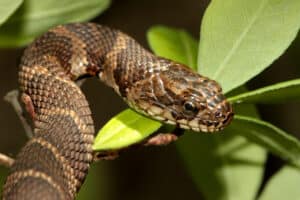