Truly, there are some misconceptions and a handful of questions many people ask about javelinas, probably because they are often confused with domestic pigs in terms of their head shapes and medium-sized bodies. Although these hoofed mammals are popular in the southwestern and central parts of the United States, only a small percent of the world’s population know about their population. For emphasis, javelinas are not pigs, but would you want to learn more about the distinguishing features of javelinas and pigs?

We’ll discuss their differences in this article and also get to know if javelinas are wild and dangerous.

Also known as collared peccary, javelinas are wild medium-sized mammals resembling a pig or a wild boar. Intriguingly, these wild animals are in the order Artiodactyla and the family Tayassuidae found throughout the southern deserts of the United States southward through the Amazon basin to Patagonia, South America.

Fascinatingly, the most prominent feature you see about these wild mammals is their pig-like nose, their pepper-colored hair, short legs, and sharp canine teeth, which are about an inch long. However, they are mainly food-driven, implying that food availability determines the herd’s location.

For food, javelinas are omnivores feeding on plants and animals, although they mostly eat grasses, shrubs, mesquite beans, cacti, and many other roots and tubers. Although it is quite unfortunate that their poor vision rarely aids them when foraging for food, their incredible sense of smell could be exceptionally compensating. For their size, javelinas range between 2ft and 3ft in length and weigh about 20 to 60 lb for a full-grown adult. They have an average lifespan of ten years, although some have lived longer.

Javelinas are not entirely dangerous, as they do not attack just about anything. However, they wouldn’t hesitate to launch an attack on humans and pets if they feel threatened. In fact, in a bid to protect their little family and territory, they charge, growl, teeth clack, bite, or even inflict serious injuries on predators and trespassers.

Are Javelinas Dangerous to Humans?

Unreservedly, the simple answer to this question is yes. Javelinas can be dangerous to humans. These vicious look-alike wild pigs occasionally bite humans. Sadly, several of their recorded biting escapades and attack over the years were on people who fed them. No doubt, they are very strong animals with extremely sharp tusks capable of hurting humans. But, just a bite from these vicious animals could inflict serious wounds.

A second reason that suggests javelinas could be dangerous to humans are cases affirming that these animals are disease carriers. They are known carriers of certain bacteria and diseases like rabies, Salmonella, and distemper that often affect pets. Some of these pets can be zoonotic and transfer these diseases to humans, who then pay the ultimate price with severe health complications or even death, as the case may be.

Can a Javelina Harm Your Pet?

Yes, javelinas’ bite could harm your pets. They are fierce, tenacious creatures with well-developed two-inch-long canine teeth that are well-carved for cutting and slashing. These teeth also serve as their primary defense weapon to wreak serious damage on victims.

For some reason, javelinas seem to be extraordinarily crazy about dogs. In fact, it is fair to say that they do not like the sight of dogs at all. So if you own a dog as a pet and reside in places where javelinas are, you want to make sure they do not cross paths.

Javelinas can consequently attack pet owners to defend themselves against dog threats. However, to curb this menace, it is advisable to refrain from feeding javelinas, as feeding them may redirect their attention to your dwelling place, which may be detrimental to your crops (if you’re a farmer) or your lovely little pets.

Can You Keep Javelinas as Pets?

There is no such law prohibiting individuals from keeping these creatures as pets. However, one must take cognizance of the fact that they remain wild animals and should be treated in that regard. They are not seen or treated as pets, and since humans rarely breed them, you want to stay away from keeping them as pets. Moreover, they are not common to adopt from pet stores or be bought from neighbors.

Differences Between Javelinas and Pigs

Regarding the suborder common to omnivore and ruminant mammals, it is believed that javelinas have a traceable history to pigs and hippopotamus. Although these wild mammals are practically pig look-alikes, they aren’t pigs.

Now, let’s outline the differences between the two animals and clarify some misconceptions.

Importance of Javelinas to Humans

In some places like Arizona and Texas, javelinas have been considered game animals and are legally harvested for hunting. Some other individuals harvest them for their meat. So, by default, collared peccary, otherwise known as javelina, is pretty important to man, both dead or alive.

Other Interesting Facts about Javelinas

“Lone ranger” does not apply to these not-too-good-looking and vicious animals. In a simple sense, javelinas are not solitary animals. Interestingly, these wild mammals have a unique way of identifying themselves and marking out their territory, courtesy of their scent glands and long hairs.

They surprisingly rub off their scent on tree stumps and rocks for two reasons:

First, to mark out their territory while sending warning signals to other wild animals to keep off.

Secondly, they rub off these scents for easy identification between themselves. And when these individual scents are combined, they jointly form a herd perfume of some sort used to identify herd members.

For adaptation and lifestyle, javelinas are not solitary animals but live in groups of large numbers as in families. On average, there are about six to nine members of javelinas in a group.  Nevertheless, some groups have had greater numbers, up to 53. One thing is certain with javelinas – they do not joke with their territories, mainly in oak woodlands, saguaro and palo verde forests, desert washes, and grasslands with mixed shrubs and cacti.

When classified based on what they eat, javelinas are numbered among omnivores implying that they make delicious delicacies out of grubs, insects, and occasionally small animals. They also eat native plant foods such as prickly pear, mesquite beans, agave, tubers, roots, and other green vegetation. As javelinas feed on different plant-based foods, they also make excellent meals for some predators like coyotes, mountain lions, bobcats, jaguars, and humans. 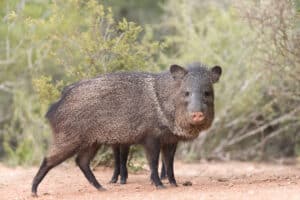