The pig was among the first animals to be domesticated.

Main Prey
Roots, Seeds, Leaves
Fun Fact
The pig was among the first animals to be domesticated.
Habitat
Forests and grassland
Diet
Omnivore
Average Litter Size
7
Lifestyle
Favorite Food
Roots
Type
Mammal
Slogan
Thought to have been domesticated in 9,000 BC!

Click through all of our Pig images in the gallery. 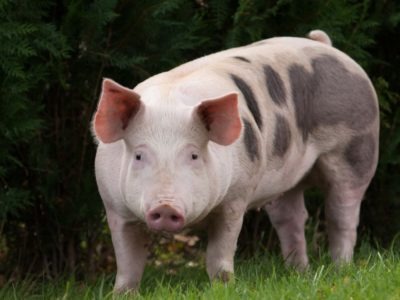 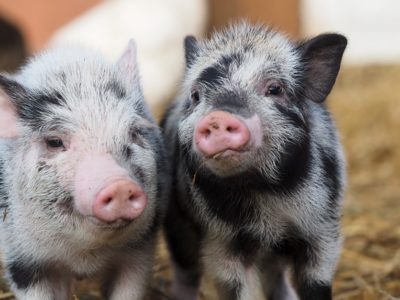 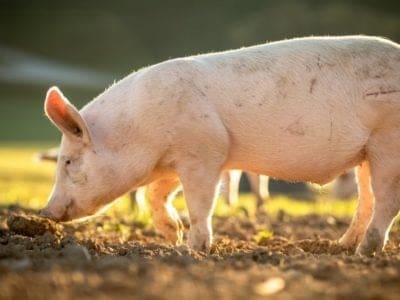 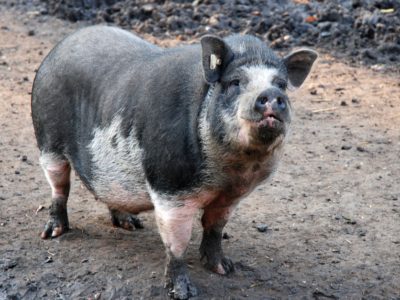 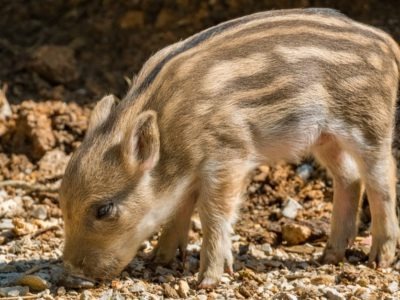 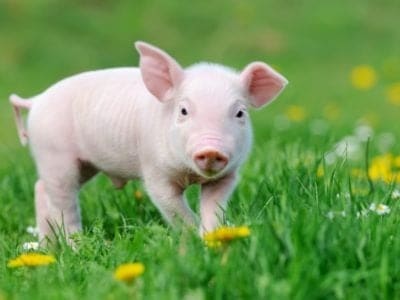 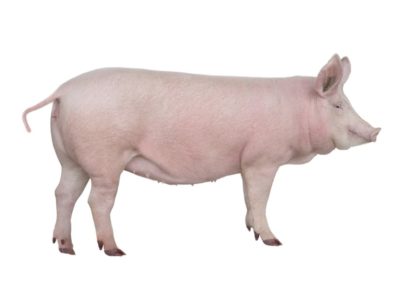 View all of the Pig images!

The pig was among the first animals to be domesticated.

Among the first animals to be domesticated by humans, the pig is found everywhere in the world except in Antarctica, North Africa, and far-northern Eurasia. These highly social and intelligent creatures are among the most populous large mammals in the world and are very biologically similar to humans.

The domestic pig, scientific name Sus scrofa, is a major food source for humans; approximately 60 million are found on farms in the U.S. alone, and more than 1 billion are slaughtered annually. Some pig species are classified at various levels of endangerment, however; examples of many of these species can be found in zoos around the world.

The pig is a mammal belonging to the order Artiodactyla and the family Suidae, which is also known as the even-toed ungulate family. That family is further subdivided into another four to eight genera, with domesticated pigs and wild boars belonging to the genus Sus. Species belonging to that genus are regarded as suids or swine; eight living species currently exist.

Some examples of other pig species include:

Pig: The Animal’s Appearance and Behavior

Pigs span many genera and species, so they vary a bit in appearance. In general, however, they are known for their stout bodies, short legs, and prominent snouts. On average, they grow to a size of between 300 and 700 pounds. The largest pig of all time, Big Norm of Hubbardsville, New York, weighed 1,600 pounds at his death in 2009. In 2012, a hog named Reggie set the weight record at the Iowa State Fair for Biggest Boar, weighing in at 1,335 pounds.

Most of them have sparse patches of bristles covering their skin. Some have patterns of spots while others are more uniform in color. They have four hoofed toes on each foot, and their large heads contain a total of 44 teeth. These animals have scent glands covering their faces, and they rub their faces against objects to spread their scent and to claim their territory. Their snouts are highly sensitive, and they dig them into the soil to root around for food. Since they lack effective sweat glands, they must regulate their temperatures by wallowing in cool water or mud.

Today, there are more than 500 breeds of domesticated pig in the world. The most popular include the Yorkshire, also known as the large white, which can grow up to 1,000 pounds in size. The Chester White is known for its all-white appearance and medium floppy ears. The Landrace pig, another all-white breed, is particularly prized for its bacon.

Highly social animals, these animals collect in groups called sounders in the wild. These groups consist of two females and their young. Males tend to be more solitary. These animals communicate using a variety of sounds, including squeaks and grunts. They also use various body postures to get their point across. For example, they might raise the crest of hair on their backs, grind their teeth, jerk their head, or cock their ears.

Pigs are biologically very similar to humans. As a result, they are often used in medical experimentation. Their heart valves are sometimes transplanted into human hearts, saving human lives.

Domestic pigs are descendants of the wild boar, Sus scrofa, and the Sulawesi warty pig, Sus celebensis. The two swine species diverged from their closest ancestor approximately 500,000 years ago. It is believed that the first pigs originated in China and the Middle East. Wild stocks from which modern domesticated pigs descended are still found in the forests of Africa, Asia, and Europe.

It is believed that the first pigs were introduced to North America during the second voyage of Christopher Columbus in 1492; they first hit the mainland of the continent around the year 1500. They are believed to have been first domesticated roughly 40,000 years ago, making them among the earliest animals domesticated by humans.

These animals have thrived so well because they can survive in a variety of habitats. They are found in grasslands, rainforests, wetlands, scrublands, temperate forests, and savannas everywhere in the world except for Antarctica, Northern Africa, and far northern Eurasia. They are also omnivores and will consume just about anything.

In the wild, their ranges vary in size. The pygmy hog, for example, has a range of approximately 60 acres; the Eurasian wild hog, on the other hand, has a range that can extend to more than 7 square miles in size.

Pig Diet: An Animal That Eats Anything

True omnivores, these animals subsist off of both plants and animals. In the wild, wild boars primarily subsist off of roots, fruit, rodents, and small reptiles. On the other hand, domesticated swine are fed diets that typically consist of grains like soy, wheat, corn, and barley. They are often given “slop,” which is made up of things like fruit rinds, vegetable peels, and other food scraps. As a result, they are handy to have around because they will eat humans’ leftovers and are not picky at all.

These animals use their snouts to root around in the soil for food. They are famous for being able to find truffles. Their rooting behavior helps the environment by clearing away dead animals, controlling insects, spreading seeds, and breaking up soil, which promotes new plant growth. At the same time, this behavior can be highly destructive to local environments.

In the wild, their primary natural predators are hyenas, big cats and even pythons.

Non-pregnant female pigs, called sows, go into heat every 21 days throughout the year; each heat lasts for eight to 36 hours. Males follow females and nudge them repeatedly to show interest. The female then allows the male to taste and smell her urine. Males usually stay with females for several days before moving on to new ones. The gestation period lasts for three months, three weeks, and three days. Sows make nests for their young within 24 hours of birth. A baby pig is called a piglet, and anywhere from 10 to 13 piglets are born per litter, on average. A female may have a litter of baby pigs up to two times per year.

Newborn baby pigs, or piglets, start feeding within one hour of birth. They are typically weaned after about two to three weeks. At birth, piglets weigh around 2.5 pounds, and they usually double in size within about a week.
Wild pigs and wild boars live for an average of 25 years in the wild. Domesticated pigs have an average lifespan of 6 to 10 years.

Large populations of feral pigs are still found across the world, including in areas of North America, South America, Australia, New Zealand, and Hawaii. Exact estimates for the total population of wild pigs are unclear. However, it is believed that there are approximately 2 billion domesticated pigs on the planet at any given time. Roughly 1 billion pigs are slaughtered every year, but intensive farming practices make it easy for farmers to keep up with demand.

Animals in the Zoo: Where to Find Pigs

Pigs of all species are found in zoos around the world. Domesticated pigs are often found within petting zoos of larger zoos, where they are used to let people enjoy up-close-and-personal experiences. Various species of wild pigs are also found in zoos around the globe. For example, the San Diego Zoo has a population of Visayan warty pigs, the most endangered species of the pig on the planet. It was the first zoo outside of the Philippines to breed them, and more than 60 have been born there since 2002. Like many prominent zoos, the San Diego Zoo also boasts red river hogs and pig deer, or babirusa pigs, which are natives of Indonesia.

Are pigs carnivores, herbivores or omnivores?

How many toes does a pig have?

Generally speaking, pigs are not dangerous. Their primary defensive measure is their speed, so their first instinct when confronted is usually to run. When cornered, however, pigs may use their tusks to inflict damage on opponents. Their tusks are often razor-sharp, and pigs may repeatedly jab at targets when feeling threatened.

Because they are opportunistic omnivores and will eat practically anything, pigs will, indeed, eat human flesh. However, they are only likely to do so if they stumble upon a dead human body; they are not known to physically attack, kill, and then eat humans.

What is unique about pigs?

Unlike most hooved mammals, pigs build nests for their young and do not have multichambered ruminating stomachs. As a result, they are not able to survive off of leaves and grass alone.

Do pigs eat their own poop?

No, pigs do not willingly eat their own feces.

What Kingdom do Pigs belong to?

Pigs belong to the Kingdom Animalia.

What class do Pigs belong to?

Pigs belong to the class Mammalia.

What phylum to Pigs belong to?

Pigs belong to the phylum Chordata.

What family do Pigs belong to?

Pigs belong to the family Suidae.

What order do Pigs belong to?

Pigs belong to the order Artiodactyla.

What type of covering do Pigs have?

Pigs are covered in Hair.

What genus do Pigs belong to?

Pigs belong to the genus Sus.

In what type of habitat do Pigs live?

Pigs live in forests and grasslands.

What is the main prey for Pigs?

How many babies do Pigs have?

The average number of babies a Pig has is 7.

What is an interesting fact about Pigs?

Pigs are thought to have been domesticated in 9,000 BC!

What is the scientific name for the Pig?

The scientific name for the Pig is Sus scrofa scrofa.

What is the lifespan of a Pig?

How fast is a Pig?

A Pig can travel at speeds of up to 11 miles per hour.