Males have a top tusk to sharpen the bottom one! Click through all of our Wild Boar images in the gallery. 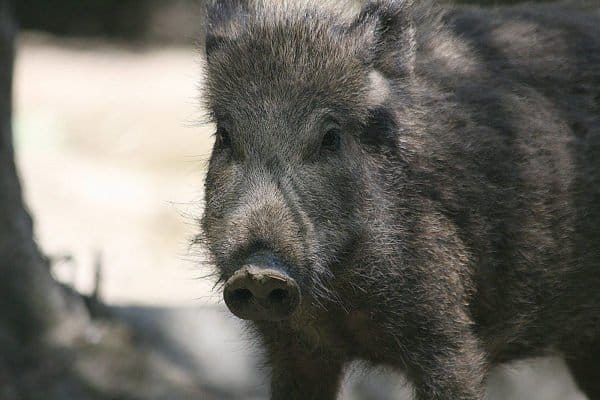 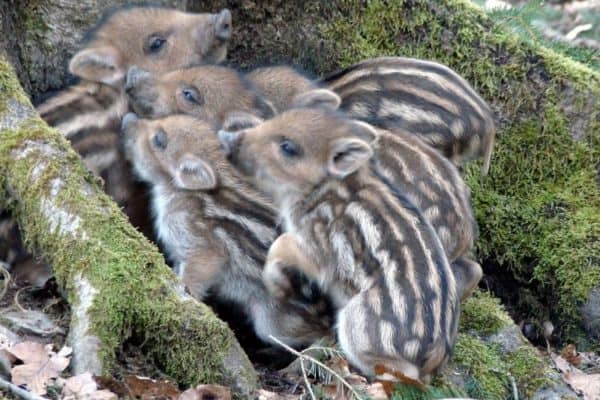 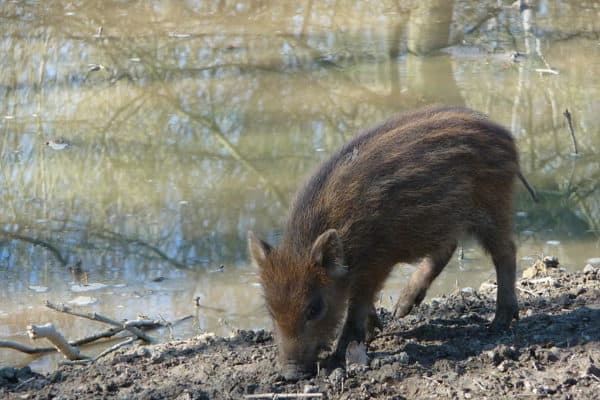 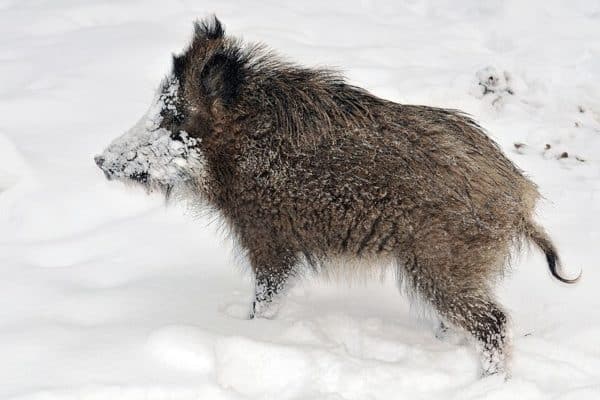 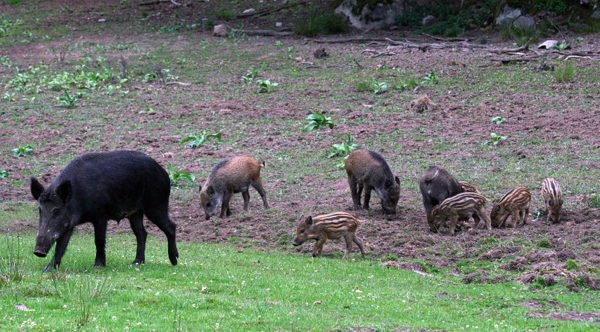 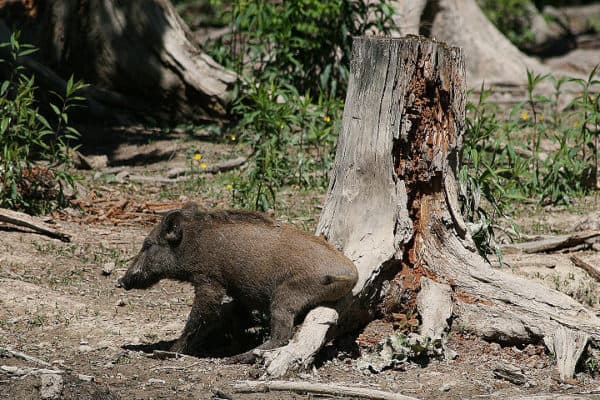 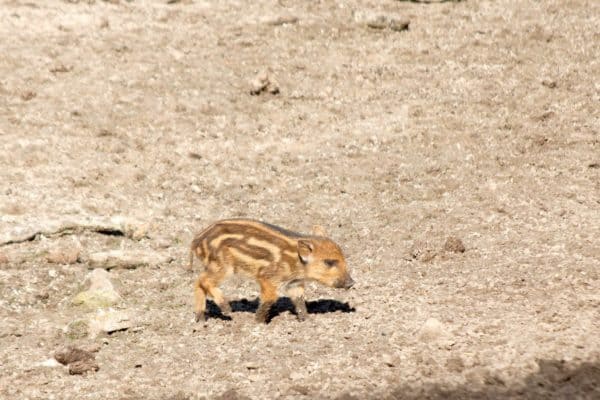 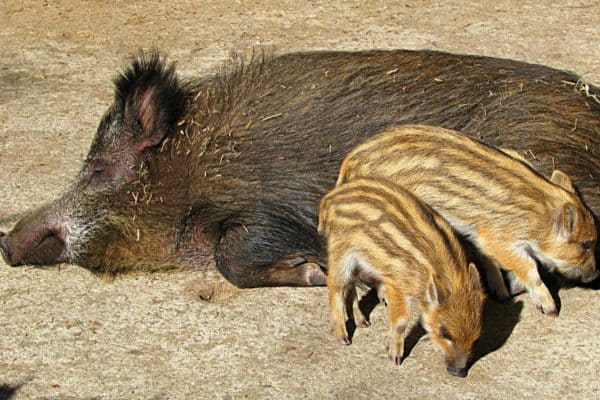 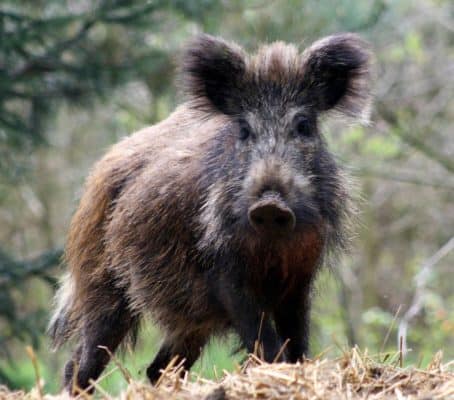 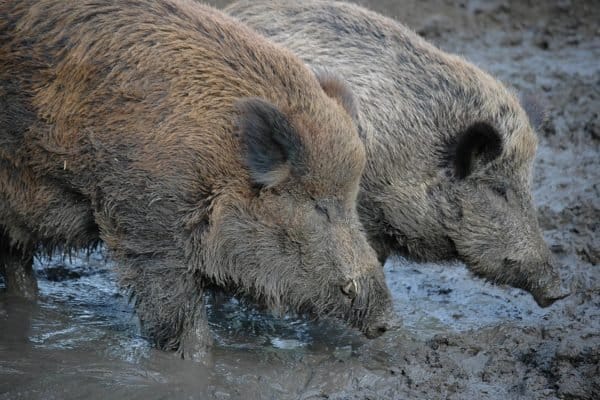 View all of the Wild Boar images!

The Wild Boar is a species of Wild Pig, native to the forests of Europe, north-west Africa and it is also found throughout Asia. The Wild Boar is an animal with an extremely wide distribution with the number of estimated Wild Boar subspecies ranging from 4 to 25. Naturally, it is hard to classify them all as they can easily interbreed, so it is widely agreed that there are four main subspecies which are determined by their location. They are all very similar in size and appearance, but tend to vary somewhat in colour, depending on their geographic location. The Wild Boar is an extremely adaptable animal as it is found in a variety of different habitats, eats almost anything that will fit in its mouth and not only runs fast, but also swims well too. They are also commonly known as European Wild Pigs, Hogs or simply Boars.

The Wild Boar is a medium-sized mammal with a large head and front end, that leads into a smaller hind. They have a thick and course double coat of fur, that consists of a harder, bristly top layer, with a softer undercoat beneath it. The hair that runs along the ridge of the Wild Boar’s back is also longer than the rest. The Wild Boar varies from brown, to black, to red or dark grey in colour, something which generally depends on the individual’s location. For example Wild Boar individuals found in Western Europe tend to be brown, where those inhabiting the forests of Eastern Europe can be completely black in colour. The Wild Boar is an animal with incredibly poor eyesight due to its very small-sized eyes, but they also have a long, straight snout which enables them to have an incredibly acute sense of smell.

The Wild Boar is the most widely distributed land mammal on Earth as its native range extends from Western Europe, right across to Japan to the east, and down to the rainforests of Indonesia in the south. The four separate subspecies are determined by their location with one inhabiting Europe, north-western Africa and western Asia; another is found across northern Asia and in Japan; the third inhabits the tropical jungles of India, South East Asia and the Far East, with the last being found only in Indonesia. Wild Boars are found in a variety of different habitats including tropical jungles and grasslands, but they tend to favour deciduous broad-leafed forests where the vegetation is incredibly dense.

Wild Boar are nocturnal animals that only come out at night to forage for food. They spend around 12 hours sleeping in a dense nest of leaves during the day, before waking up to find a meal under the cover of night. Female Wild Boars are relatively sociable animals, inhabiting loose territories in groups known as sounders which can contain between 6 and 30 individuals. Sounders consist of breeding females and their young and can often be found in the same area as other groups, although the two tend not to mix. Males however, are solitary for the majority of the year, with the exception of during the breeding season when they can be found in close proximity of both the sounders, and indeed other males. Male Wild Boar compete with one another by fighting for the chance to mate with a female.

Once mated the female Wild Boar gives birth to 4 – 6 piglets in a nest found in a dense thicket, which is made up of leaves, grasses and moss. The mother remains with her piglets solidly for the first couple of weeks to protect them from hungry predators. Wild Boar piglets are incredibly distinctive animals as they have light brown fur, with cream and brown stripes that run the length of their backs. Although these stripes begin to disappear when the piglets are between 3 and 4 months old, they prove to camouflage the Wild Boar young into the debris on the forest floor, very effectively. Once they are two months old, the piglets begin to venture out of the nest on short foraging trips, before they become independent at around 7 months old and are almost red in colour. The fur of the Wild Boar does not reach adult colouration until the animal is about a year old.

The Wild Boar is an omnivorous animal that primarily feeds on plants. Plant matter comprises around 90% of the Wild Boar’s diet as they feed on young leaves, berries, grasses and fruits, and unearth roots and bulbs from the ground with their hard snouts. Living in highly seasonal regions, Wild Boars have had to adapt to the changing fruits and flowers, and are known to favour the protein-rich nuts (such as acorns) that become available in the autumn and prepare them for the winter ahead. They will however, eat almost anything that will fit into their mouths, and supplement their diet by eating eggs, Mice, Lizards, Worms and even Snakes. Wild Boar will also happily finish off the abandoned kill of another animal.

Due to their incredibly large distribution, Wild Boars are prey to numerous predators of all shapes and sizes, throughout their natural habitats. Large felines such as Leopards, Lynx’s and Tigers are amongst the most common predators of the Wild Boar, along with other large carnivores like Wolves and Bears, and also Humans. Although their numbers in the wild have dropped rapidly in much of their natural range, in other areas including mainland Europe, Poland and Pakistan, there have actually been significant population rises and the exact reasons are not really known. It is thought to be due to a variety of things including the decline of their main predators, their increased protection, and the more regulated hunting of them in their native regions.

The snout of the Wild Boar is probably one of this animal’s most characteristic features, and like other Wild Pigs, it sets these mammals apart from the others. The snout of the Wild Boar has a cartilaginous disk at the end, which is supported by a small bone called the prenasal, that allows the Wild Boar’s snout to be used as a bulldozer when it is foraging for food. All Wild Boars have tusks on their bottom lips, although the male’s are larger than those of the female, and actually curve upwards out of their mouths. More interestingly however, males also have a hollow tusk on their top lip too, which actually acts life a knife-sharpener, constantly sharpening the male’s bottom tusks, both of which can grow up to 6cm long.

Wild Boars are now farmed in many places for their meat but they have also been hunted for their sharp tusks as prize trophies for centuries, meaning that populations even became extinct in some areas, such as Britain. Today however, Humans have introduced the Wild Boar to numerous different countries around the world, purely so that they can be hunted and eaten. This includes Hawaii, The Galapagos Islands, Fiji, New Zealand, Australia, South Africa, Sweden and Norway. They have in fact been farmed by people for so long, that the Wild Boar is actually the ancestor of common domestic Pigs. Although a number of the world’s Wild Boar populations are actually increasing, the species as a whole has been threatened by habitat loss to Humans, mainly through deforestation and continuously growing settlements.

Today, the Wild Boar has been listed by the IUCN as being a species that is of Least Concern of becoming extinct in its natural environment in the near future. Population numbers are suffering on the whole however, mainly due to hunting and loss of habitat. In a number of areas though, there have actually been rapid inclines in Wild Boar populations, possibly due to the loss of many of their main predators such as Wolves and Tigers.

Wild Boars are Omnivores, meaning they eat both plants and other animals.

What Kingdom do Wild Boars belong to?

What class do Wild Boars belong to?

What phylum to Wild Boars belong to?

What family do Wild Boars belong to?

What order do Wild Boars belong to?

What type of covering do Wild Boars have?

Wild Boars are covered in Fur.

What genus do Wild Boars belong to?

Where do Wild Boars live?

In what type of habitat do Wild Boars live?

What are some predators of Wild Boars?

Predators of Wild Boars include tigers, wolves, and humans.

How many babies do Wild Boars have?

The average number of babies a Wild Boar has is 5.

What is an interesting fact about Wild Boars?

Male Wild Boars have a top tusk to sharpen the bottom one!

What is the scientific name for the Wild Boar?

The scientific name for the Wild Boar is Sus scrofa.

What is the lifespan of a Wild Boar?

What is a baby Wild Boar called?

A baby Wild Boar is called a piglet.

How many species of Wild Boar are there?

There are 4 species of Wild Boar.

What is the lifespan of a Wild Boar?

What is a baby Wild Boar called?

A baby Wild Boar is called a piglet.

How many species of Wild Boar are there?

There are 4 species of Wild Boar.

What is the biggest threat to the Wild Boar?

The biggest threat to the Wild Boar is habitat loss.

What is another name for the Wild Boar?

The Wild Boar is also called the wild pig, wild hog, or boar.

How fast is a Wild Boar?

A Wild Boar can travel at speeds of up to 30 miles per hour.