Written by Cindy Rasmussen
Published: May 24, 2022
© Kevin Wells Photography/Shutterstock.com
Share this post on:
More Great Content:
Watch This Bald Eagle Hunt A Salmon…
Steelhead vs Salmon: What’s the Difference?
Trout vs. Salmon: The Key Differences Explained
What Do Salmon Eat? 12 Foods in…
Red Salmon Vs Pink Salmon: What Are…
10 Incredible Salmon Facts
↓ Continue Reading To See This Amazing Video

The Pacific Northwest states of Washington, Oregon, and Northern California have thousands of salmon that make a spectacular migration up the dam systems for spawning. But do salmon live in other areas of the United States? Do they have to have access to the ocean? Are there Salmon in the Great Lakes? Let’s find out!

All about the Great Lakes

There are five great lakes located in the northern midwest bordering the US with Canada. These massive lakes were formed more than 20,000 years ago by glaciers that moved and carved the earth underneath, creating large basins that later filled with melted ice water. About 3,000 years ago, the lakes settled into the shapes they are today. The five Great Lakes are Lake Superior, Michigan, Huron, Erie, and Ontario. Most of the lakes feed into the St. Lawrence River which empties into the Atlantic Ocean. The southern tip of Lake Michigan also feeds the Illinois river, which feeds into the Mississippi River that empties into the Gulf of Mexico.

Yes! There are salmon that live and spawn in the Great Lakes. When salmon populations started to decline in the US, conservationists decided to introduce salmon in other areas outside their native homes. Now, they can be found in all five Great Lakes.

What is the history of Salmon in the Great Lakes?

Between 1873 and 1947, 743,000 anadromous Atlantic salmon were stocked in the Great Lakes. Massachusetts was the first to stock landlocked salmon in 1874 (landlocked salmon do not return to the ocean after a year or two, anadromous salmon are born in freshwater, grow up a bit, then return to the ocean to live, but come back to spawn in freshwater). These programs were initially unsuccessful in producing breeding populations that sustained themselves. The first sustaining population was the pink salmon which was first stocked in 1956. Later by 1970, coho and chinook salmon were established in the Great Lakes. However, researchers believe the levels of salmon in the Great Lakes will need to continue to be stocked to maintain.

What kind of salmon are in the Great Lakes?

There are four main kinds of salmon that can be found in the Great Lakes. Chinook, Coho, Pink, and Atlantic Salmons. Let’s look at each one!

These are the largest salmon found in the Great Lakes, giving them the alternative name of “King Salmon”. Most found in the Great Lakes are smaller, with anything over 20 pounds being a good catch. Chinooks on the west coast, that live between northern California and Alaska can get to be 4.9 feet and weigh 129 pounds! They are torpedo-shaped fish that change color during the spawning season. The males especially will turn deeper olive/red/purplish and have a hooked jaw. They are sometimes called “blackmouth” salmon since their mouths appear black. After years of stocking programs they have been established in the Great Lakes for more than 50 years now.

The Coho salmon was one of the first species to finally be established in the Great Lakes. It is the second-largest salmon in the Lakes with the average coho in Lake Michigan being 5 pounds. Adults are usually in the 5-10 pound range and are 24-28 inches long. Their backs are dark blue to green with spots and they have a white belly. During spawning, they will change to a maroon body with a dark back.

Did you know that Pacific salmon die after spawning? They pass on their genes to the next generation and that is that. Pink salmon are Pacific Salmon even though they now also live in the Great Lakes.

Lake Huron is the best place to fish for pink salmon, with many living in the tributaries just off the lake. There is also a fair number in Carp River, and up to the St. Mary’s River. Pink salmon are smaller with the largest one on record in Michigan being 8 pounds, but most are between 3.5 to 5 pounds. It averages 20-25 inches in length. The pink salmon in the Great Lakes have a one-year or three-year spawning cycle with the largest number of salmon making their run in odd-numbered years.

These feisty salmon used to make their way down the St. Lawrence River from the Atlantic to spawn in Lake Ontario, but by 1900 they were nonexistent. Now the native population in Maine is considered endangered. In 1972, conservationists took it to the next level and stocked 20,000 young Atlantic salmon in the Boyne and Au Sable rivers. The population is continuously stocked by gathering eggs from the Lake Superior State University laboratory. Atlantic Salmon in the Great Lakes usually are between 3-6 pounds after a year. Fly fishing for Atlantic salmon in the fast-moving rivers can be a rush with some of the best fishing in the St. Mary’s River. The salmon leap out of the water and can put up quite a fight making them a rewarding sport fish. 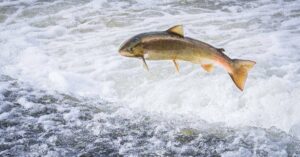 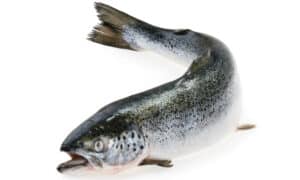