Click through all of our Salmon images in the gallery. 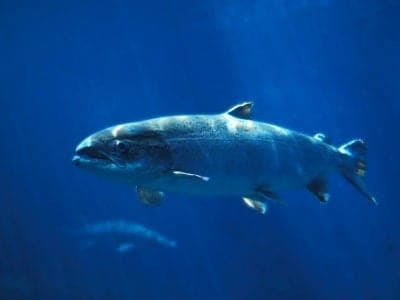 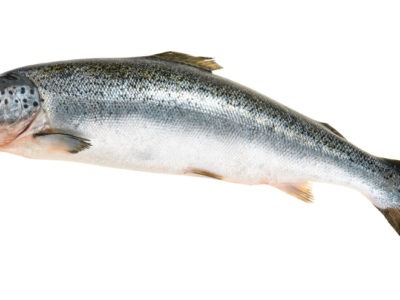 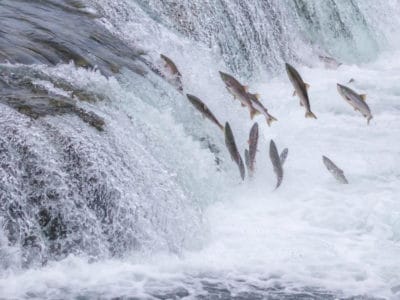 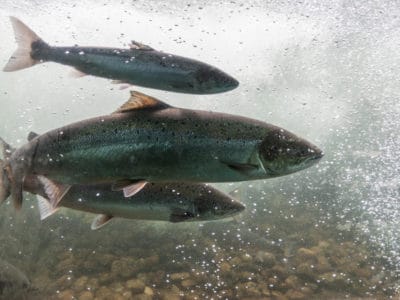 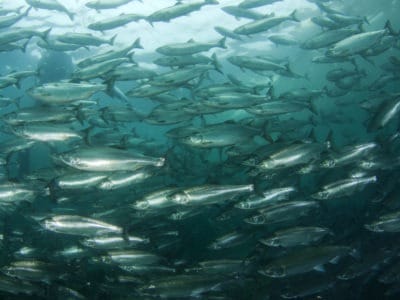 View all of the Salmon images!

Millions of pounds of salmon are harvested every year as a source of nutrition.

Every year, when conditions are right, the salmon undertakes a remarkable journey upstream to reproduce with others and create the next generation of fish. This is accompanied by a massive physical transformation in which its color and body shape change to suit its new habitat. Many never make it. Carnivores, birds of prey, and even humans all capture these fish for their oily meat high in omega-3 and proteins.

The salmon is a group of fish that belongs to the family of Salmonidae. The name comes to us in English from the Latin word salmo. This in turn might have been based on an older word that means “to leap.” It is important to note that not every member of the family Salmonidae is a true salmon. This family also includes trouts, chars, and whitefish.

This family of fish is divided into two different genera. The genus Salmo includes only the Atlantic salmon. The genus Oncorhynchus includes all of the various Pacific salmon. There are currently around eight species of true salmon (seven of them Pacific), plus four other species of “fake” salmon, including the entirely freshwater Danube salmon, which is actually more trout-like. Here are a few examples of true salmon:

The salmon is a long fish with a pointed or hooked beak, two sets of paired fins on the pelvis and side, and four single fins around the body. Throughout most of the year, it sports a shimmering silver appearance with pockets of blue, red, green, pink, or purple, but as spawning season approaches, the scales transform into all manner of bright colors. Some species may also undergo physical changes such as growing a hump, a curved jaw, or canine teeth.

An adult weighs an average of around 10 to 20 pounds, but there is considerable variation around this number. The pink salmon weighs no more than 3 to 6 pounds, while the appropriately named king salmon (the Chinook) weighs more like 23 pounds. The largest specimen ever observed was a Chinook that weighed 126 pounds and measured almost 5 feet long. The largest one ever caught was an 82-pound behemoth from Sitka, Alaska.

This fish has adapted an anadromous lifestyle, which means it spends its lives in saltwater oceans but then returns to freshwater sources (usually the place of its birth) to spawn. The greatest concentration is found in the North Pacific, but it is endemic to the North Atlantic as well. The salmon has also been introduced into several non-native regions, including the Great Lakes in North America and Patagonia in South America.

This fish’s diet consists of worms, squid, crustaceans (like krill), and other fish. In turn, it is a common source of food for many carnivores, including bears, seals, killer whales, sharks, otters, kingfishers, eagles, and humans. The salmon actually plays a critical role in the ecosystem by transferring resources from the nitrogen-rich ocean to inland areas.

Driven by instinct, the salmon’s life revolves around an annual schedule that culminates with the spawning season in the late summer or fall when they move upstream. Most species stick closely to the sea, but some populations of Chinook or king salmon undertake an epic journey of more than 2,000 miles up the Yukon River. They fight through the water, leaping and bounding against the direction of the river.

In order to produce offspring, the female will dig a hole in the gravel with her tail and then lay thousands of eggs. The male will come by and release his sperm into the water to fertilize the eggs. Incubation takes 60 to 200 days, depending on the temperature of the surrounding water. Once they hatch, the young fry will then consume what remains of the yolk and emerge from the gravel. It may dally for a few years in the same spawning location before heading back to the sea, but some species return almost immediately after they hatch. The life expectancy is between two and seven years, but four or five years is the average.

Salmon in Fishing and Cooking

Due to its abundance, the quality and nutrition of its meat, and the ease of catching it, this fish is one of the most popular in the entire world. One study found it was second in popularity only to tuna. Every year millions of pounds are caught in the Pacific. Half of this is just pink salmon. Another third is chum salmon. The remaining catch is mostly sockeye. Both the Atlantic salmon and the Chinook salmon are primarily caught by recreational and sports fishers.

This fish has a rather oily taste due to the abundance of healthy fats in its skin. The intensity of the taste depends on its color. The lighter meat has a mild taste, while the redder meat has a much stronger taste. It is popular to smoke, bake, and fry. In terms of nutrition, it is a good source of proteins and omega-3.

This is one of the most abundant types of fish in the world’s oceans. A 2018 study estimated that there were some 665 million adults in the North Pacific alone, two-thirds of which are pink salmon. The combination of favorable oceanic conditions and well-managed hatcheries has bolstered numbers, even as many other types of fish are declining. Alaska hatcheries release some 1.8 billion pink salmon fry each year, while Asian hatcheries add another 3 billion. This fish is so prolific in the Pacific that some scientists worry it may threaten other fish species by outcompeting them for food.

Most species are listed as least concern, but if there is any danger at all from human activity, it’s due to pollution, overfishing, and dam construction. The Danube salmon, although not a true salmon, is currently endangered.

The salmon contains a very healthy and oily meat full of omega-3 fatty acids, vitamin D, and proteins. However, studies have revealed that salmon meat may contain small amounts of mercury which accumulate in the marine ecosystem. This mercury isn’t necessarily enough to cause harm, but if you’re worried about mercury levels, then Harvard Health recommends limiting yourself to no more than a single 6-oz serving of salmon per week.

How many years does a salmon live?

The salmon lives an average of four to five years, depending on the species.

How high can a salmon jump?

The typical salmon can jump around 2 meters, or 6.5 feet, in the air while swimming against the stream.

How fast can salmon swim?

Laboratory studies have shown that some salmon swim up to 1.6 mph in their travels to their spawning location. However, speeds of around 7 or 8 mph have been documented. This is not always enough to get away from fast-moving predators like sharks.

What do salmon eat?

The facts show that the salmon’s diet largely consists of worms, cephalopods, crustaceans, and other fish.

What Kingdom do Salmon belong to?

Salmon belong to the Kingdom Animalia.

How do Salmon have babies?