The baby octopus is one of the most astounding creatures in the sea. They have eight arms and three hearts, but that’s not the most extraordinary thing about them! Keep reading to learn five out-of-this-world facts about the baby octopus!

#1: A Baby Octopus is Called a Larva!

Octopus larva comes into the world in an astounding way. Octopi have male and female adults which join together to make their babies. Sometimes, the male octopus will insert one of his arms inside the female’s cavity to inject his sperm. However, scientists say that males can even hand the sperm to the female to fertilize her eggs herself.

It’s not until after the baby is conceived that things get brutal. Did you know that both the male and female octopuses die soon after their babies are born? It’s true! A female octopus mates with the male, lays around 300,000 eggs, and watches them fervently until they hatch, which can take anywhere from two to ten months. Females are even known to stop eating while protecting their eggs.

Male octopi don’t participate in their babies’ lives. After fertilizing the mother’s eggs, they swim off, only to die a few months later. Though the mothers have a slightly longer life, they usually die before their babies hatch, either from starvation or the cells in their body failing, causing their organs to shut down.

In some species of octopus, females will even eat the males after mating! Brutal!

When an octopus larva hatches, they are extremely small; about the size of a pea! Not much is known about their early lives, but scientists say that the tiny invertebrates float around in plankton clouds while they are small. However, a baby octopus doesn’t stay small for long.

Baby octopi are exceptionally good at converting the meals they eat into body mass. For example, a baby octopus can easily double its weight every two to three months until it is fully grown.

But why do octopi grow so fast? Researchers say that the lifespan of a baby octopus is extremely short. Most species only live to be about three to five years old. That means that in order to survive in the wild, they must bulk up as quickly as possible to stay safe from predators.

If you’ve ever seen an octopus before, you know their bodies are made of smooth, squishy-looking material. They are invertebrates, which means they also have no spine. Although the body of a baby octopus is soft, it has a special, hard appendage for feeding: a beak.

The beak of an octopus baby looks similar to that of a parrot’s. This appendage is located at the base of the octopus’s body, in the center of its tentacles. It is made of chitin, which is the same substance that makes up the outer shell of many insects’ bodies, such as beetles.

What’s even more astounding about the octopus beak is how it’s used. It is sharp enough to tear through flesh and has enough dexterity to allow the animal to break into the shell of a clam. It is embedded into an organ called a buccal mass, which holds it into place.

So how does a baby octopus use its beak to eat? The process is more astounding than you might think! First, it captures its prey with its tentacles and uses its drill-like tongue to penetrate any shells. Then, it uses a venomous toxin in its saliva to stun its prey to make it easier to consume. Finally, it uses its beak to break the food down into easier-to-eat pieces, making an easily-digestible meal.

The paralyzing toxins in the saliva of most octopus species are not threatening to humans. While getting attacked by an octopus can cause bleeding and swelling, only the venom from a blue-ringed octopus is deadly to humans. What a relief!

#5: The Baby Octopus is the Smartest Invertebrate on Earth!

It’s no secret that the baby octopus is an incredibly smart creature. However, did you know that they are the most intelligent invertebrates on the planet? Although their brains lack similar structures that vertebrate brains have, they somehow have astounding abilities in cognitive function and beyond.

Some of the coolest things that a baby octopus can do include problem solving and using tools. Researchers say that a baby octopus can learn how to screw a lid off a jar containing food. They are even said to have better short-term and long-term memory than humans! They can also solve puzzles, build shelters, and play with toys. How cute!

What is a baby octopus called?

A baby octopus is born about the size of a pea and is called a larva. Once the larval stage is over, the baby is called a juvenile until it is an adult.

How much does a baby octopus weigh?

At birth, a baby octopus weighs about 22 milligrams. However, they don’t stay so tiny for very long! Octopus babies double their weight every two to three months.

What do baby octopi eat?

A freshly hatched baby octopus enjoys a diet of small sea stars, invertebrates, and baby crabs. As they grow, their diet widens to include clams, snails, crabs, and more!

Where do baby octopi live?

Baby octopi live in every ocean in the world. They spend most of their time in dens or inside rock crevices and coral where they are hidden. 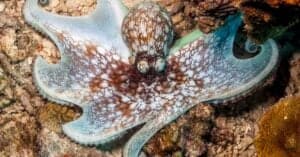 Octopus Teeth: Do Octopuses Have Teeth?

Does an Octopus Have a Skeleton?