Octopus Teeth: Do Octopuses Have Teeth?

Written by Taiwo Victor
Published: December 19, 2021
© iStock.com/Ian_Redding
Share this post on:
More Great Content:
How Many Brains Does an Octopus Have?
The 10 Largest Octopuses in the World
Octopus Lifespans: How Long do Octopuses Live
10 Incredible Octopus Facts
Octopus vs Squid: 8 Key Differences Explained
Watch an Octopus Intimidate Their Own Reflection…
↓ Continue Reading To See This Amazing Video

When talking about impressive sea creatures, the octopus is one of the most popular topics of choice. These sea creatures are highly incredible, and knowing them and breaking down everything there is to know about them, including their teeth, will surely leave your mind blown.

With the scientific name Octopus vulgaris, the octopus has about 300 species spread throughout the world. They are known to be “extra” when it comes to a lot of things. From possessing eight arms or tentacles, to having not one, not two, but three pumping hearts, these creatures never fail to impress. Apart from having multiple hearts, octopuses also have more than one brain, which gives justice to their amazingly witty moves in hiding and plotting extravagant escape gambits from predators. Octopuses inhabit coral reefs, small cracks, and caves beneath the surface of the sea.

Despite being prey themselves, octopuses also feed on other living sea animals, which means that they must have teeth to chew or gnaw on their prey, which brings us to ask, do octopuses have teeth?

Do Octopuses Have Teeth?

Octopuses don’t have teeth, but that doesn’t mean they can’t bite or chew their food. As carnivores, octopuses eat using their sharp beaks.

Being meat-eaters, it is easy to assume that octopuses have sharp, razor-like teeth that aid in tearing flesh apart. However, these eight-legged creatures actually have sharp beaks that help them gnaw on their food, which is actually good news because octopuses are huge fans of meat and other living vertebrates.

It’s difficult to picture an ocean-dwelling creature with a beak, such as an octopus. Beaks are typically associated with birds, and in fact, several definitions describe the beak as the sharp, protruding component that serves as the bird’s mouth.

The beak, on the other hand, is not a characteristic that is exclusive to birds after all. All cephalopods are equipped with a two-part beak that is concealed within their jaws. The octopus is a cephalopod, an extremely intelligent group of marine animals that are distinguished by their tentacles and impressive talent for hiding from predators.

How Do Octopus Beaks Work?

An octopus’ beak is its number one weapon when it comes to attacking, killing, and eating its prey. When the octopus has its victim trapped within its tentacles, it drags it in for a beak strike. The octopus’ beak, like a parrot’s, is strong and pointed in order to puncture, shred, and tear its prey. The beak is powerful enough to pierce the shell of a snail, allowing it to suck out the critter inside.

The octopus’ mouth is not so visible as it is set in the center of the intersection where the octopus’ eight limbs meet. Despite being tiny and concealed, this portion is a lethal weapon. The octopus’ beak is composed of chitin and is a highly effective and helpful weapon. It is capable of tearing the victim’s flesh apart as well as cracking the shells of clams and crustaceans open. In addition to the damage their beaks can do to their prey, octopuses also have salivary glands positioned behind their beaks, where poison is manufactured and carried towards their prey via their beaks.

Parts of An Octopus Beak

The upper beak and the lower beak are the two primary sections of an octopus’ beak. Both of these sections are made up of two layers: an outer layer called the hood and an inner one called the wall. Two more components, the bridge, and the shoulder, hold these two layers together. These parts are not fixed, but rather movable ones that allow the beak to move like that of cutting scissors.

The radula is a tongue that the octopus has, located between the beak and the poison gland. Most of an octopus’ diet consists of animals enclosed in shells, so the radula’s main purpose is to extract the victim’s body from its shell. Being muscular and having extremely tiny teeth on its front side, the salivary papilla, situated just below the radula, is another useful part for the octopus. It works like a drill that can deliver a debilitating chemical as it progressively opens the entrance inside the prey’s shell.

How Do Octopuses Eat?

Using their suckers or suction cups to hold an animal steadily, octopuses wrap their prey in an interwoven cluster of tentacles, and drag it close to them. These suction cups have a sticky residue among the webbing that prevents the prey from escaping. Octopuses also use these suction cups to taste their food.

Octopuses inject their prey with a potent poison as they bite them, which doesn’t normally kill the victim but is enough to paralyze it. This prevents the victim from flailing around and putting up a fight as the octopus tries to swallow and eat it. Octopuses also use their strong beaks to cut the sea creature into bite-sized pieces before ingesting. They swallow their food through their esophagus and up to the brain zone, where it is pushed back down into the octopus’ digestive track.

Octopuses usually hunt for prey during the night as they can see well in the dark, treacherous depths, where they can take advantage of their prey. Since they camouflage really well with their environment by changing their color and taking up complex body patterns, they can approach their prey without being seen.

Octopuses are exclusively carnivorous. Mollusks, polychaete worms, and crustaceans such as lobsters, snails, clams, crabs, and shrimps, are the main sources of food for bottom-dwelling octopus species. Prawns, fish, and other cephalopods, on the other hand, are the principal diets of open-ocean octopuses like the mimic octopus and the common octopus.

Can Octopus Beaks Get Eaten?

The octopus’ beak is indigestible, which means it does not decompose inside the stomachs of its predators. Because the octopus lacks bones and other hard parts other than the beak, it is the only remnant left after an octopus is eaten by a larger predator. 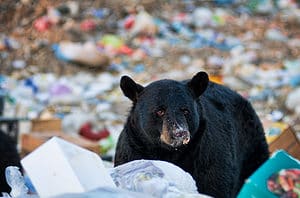