There are few things as adorable as a tiny baby rabbit. But what if we told you this wasn’t the coolest thing about rabbit kits? Rabbit babies are astounding, complex creatures with many cool things about them. Let’s learn all about the baby rabbit!

Contrary to popular belief, the baby rabbit is not called a bunny. Instead, they share their scientific baby name with animals like cats and foxes. That’s right! Baby rabbits are called kits, kittens, or kitties. Female rabbits are called does and males are called bucks, just like baby deer! Who knew?

You probably already knew that rabbits are notorious for reproducing rapidly and having large litters. But did you know that the European Brown Hare can conceive new baby rabbit kits near the end of a current pregnancy? It’s true! Let’s find out more about this amazing ability.

When European Brown Hares are near the end of their pregnancies, they have the astounding ability to ovulate again. When they mate and the released eggs are fertilized, embryos grow in their place. Instead of going on to develop in the womb, though, these embryos remain in the rabbit’s oviduct until the current litter is born.

Once a European Brown Hare has her babies, the waiting embryos in her oviduct then move to her womb. Embryos normally remain in the oviduct for about four days before the current litter is born. This means that the female rabbit’s gestation period can be shortened from 42 to 38 days. The result? Up to 35.4% more baby rabbit kits yearly – that’s a lot of bunnies!

It requires no stretch of the imagination to believe that mothers are protective. After all, most baby animals are born completely defenseless. Mother rabbits are no exception. In fact, they take some pretty cool measures to keep their young safe from predators. Since these fluffy kits have more predators than prey, it’s a good thing their mothers have their backs!

Keeping baby rabbit kits safe from predators starts from the moment they’re born. Rabbits are den animals, which means they tunnel underground to stay warm and safe. Normally, the opening to a rabbit’s den is easy to spot. However, when a litter is born, mother rabbits bury the opening of their den. This makes it more difficult for predators to spot.

Mother rabbits are also extremely careful when it comes to approaching their nests. Since lingering around her babies or returning too often would draw attention, they prefer to stay away. This means that they only return to tend to their kits about one to three times a day. Some mother rabbits are so protective that they will even eat their babies before letting a predator do so!

For many baby animals, growing up is some serious stuff. While it’s true that many young animals nurse frequently throughout the day, the same is not true for baby rabbit kittens. Since they have so many predators, their mothers must stay away from the nest for most of the day. When she returns, she can’t stay long.

The astounding thing about baby rabbit kits is that five minutes of feeding sustains them for the entire day. Their mothers won’t return to the nest for about 24 hours. However, rabbits’ milk is rich in fat and protein, which helps keep the babies full until their mother’s return. The Eastern Cottontail rabbit, for example, has milk made up of about 15% protein.

There’s strength in numbers, and rabbit kits seem to live by this rule. Did you know that rabbits live in groups? It’s true! Both adult and baby rabbits are extremely social animals and spend most of their lives living in groups. However, this isn’t just for social interaction.

It probably comes as no surprise that rabbits have a laundry list of predators. After all, they are small, weak, and lack sharp teeth or talons to protect themselves. This means that living and traveling in groups allows them safety in numbers. Despite this defense mechanism, though, most rabbits never live to see their first birthday.

What is a baby rabbit called?

How much do baby rabbits weigh?

Baby rabbit kits are seriously tiny. At birth, they weigh an astoundingly small one to one and a half ounces. Fully grown, they typically weigh anywhere from three to five pounds.

What do baby rabbits eat?

Rabbit kits are mammals, which means they depend on their mother’s milk to survive as newborns. As they grow older, they eat regurgitated food from their mother’s mouth. Once they are ready to leave their nests, they enjoy a diet of vegetables, grass, and hay.

Where do baby rabbits live?

Baby rabbits live in warrens, which are rooms created by their mother’s tunneling underground. These warrens include a series of tunnels, too! 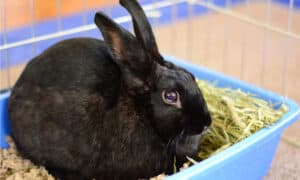