Cherry Blossoms in Georgia: When They Bloom and Where to See Them

Written by Mike Edmisten
Published: January 25, 2023
© iStock.com/mstroz
Share this post on:
More Great Content:
Is Hibiscus a Perennial or Annual?
Rose Of Sharon vs. Hardy Hibiscus
7 Extinct Trees
The 5 Best Annual Flowers For Zone…
Are There Any Plants That REALLY Keep…
Is Lantana a Perennial or Annual?
↓ Continue Reading To See This Amazing Video

When it comes to cherry blossoms, Georgia may not be the first U.S. locale that comes to mind. For most people, their thoughts will immediately turn to Washington, DC. Each spring, the nation’s capital is awash with the pink and white blooms of cherry trees at the Tidal Basin, surrounding iconic American monuments, and adorning the U.S. Capitol grounds. It is also home to the annual National Cherry Blossom Festival, so it would be reasonable to assume that DC has the largest collection of cherry trees in the nation.

That, however, is not the case. That honorific belongs to a town over 600 miles southwest of Washington, located in the southern state of Georgia.

Cherry trees are native to Japan. The mayor of Tokyo famously gave over 3,000 cherry trees to Washington, DC in 1912 to symbolize the friendship between the two cities and nations.

But the world capital of cherry blossoms is not found in DC. It may not even be found in Japan. Rather, the unofficial “Cherry Blossom Capital of the World” is none other than the city of Macon, located very close to the geographic center of Georgia.

Some Macon residents may take exception to the “unofficial” label. They point to the title as part of the official congressional record. In 1983, Georgia Congressman J. Roy Rowland made a statement about the International Cherry Blossom Festival, held in Macon each year. In his remarks, he called Macon the “cherry blossom capital.” So yes, that is actually part of the official congressional record.

Official or not, one thing is not up for debate. Macon is home to over 350,000 Yoshino cherry trees, and when they bloom, it is utterly marvelous! But, this annual spectacle had a rather humble beginning.

The Beginning of Macon’s Cherry Blossoms

It started in 1949, when a local realtor named William A. Fickling, Sr. was walking along his property. During his stroll, he noticed a tree that he did not recognize. He asked people around town, including expert gardeners. No one could identify the species of this tree.

Then, on a business trip to Washington, DC in 1952, Mr. Fickling took note of the world-famous cherry trees around the Tidal Basin. He realized that the Yoshino cherry trees of DC were an exact match to the mystery tree growing at his home.

He learned to propagate the Yoshino cherry tree and began sharing the trees with friends and family.

Then, in the 1970s, Carolyn Crayton noticed the beautiful trees. She and Mr. Fickling developed a friendship and he told her that he would donate the trees to the community if she would oversee their planting. In 1972, Mrs. Crayton organized an initiative that planted 500 Yoshinos in Macon. And that was just the beginning!

From there, the city would go on to boast over 350,000 Yoshino cherry trees. Mrs. Crayton also founded the International Cherry Blossom Festival, which has grown into a ten-day celebration in March with hundreds of events and thousands of participants.

If you’re looking for cherry blossoms in Georgia, Macon is undoubtedly the main attraction.

But it’s not the only place in the Peach State where you can take in the annual spring beauty of the cherry blossom bloom.

This Atlanta suburb doesn’t have the jaw-dropping number of cherry trees that Macon does, but its springtime beauty can’t be ignored.

The first cherry trees were donated to Conyers in the early 1980s by a Japanese businessman, Hideo Ogino. This led to the first Conyers Cherry Blossom Festival in 1982, celebrating friendship and Japanese culture.

The event has blossomed, if you will, into a gathering of diverse cultures and thousands of participants each year. It is all scheduled to coincide with the blooming of the city’s lovely Yoshino cherry trees.

While you’re in the Atlanta area, why not stop by and see the governor?

Well, you might not actually get a meeting with the governor, but you can view the cherry trees at the governor’s mansion.

In 2012, Georgia governor, Nathan Deal, and First Lady of Georgia, Sandra Deal, hosted an official cherry tree planting ceremony at the governor’s mansion. The ceremony was held in conjunction with the Consulate General of Japan.

Today, you can tour the grounds and view those cherry trees. Typically, visitors are welcomed Tuesdays-Thursdays. Check the governor’s website for specific available dates and times.

Atlanta also has lovely parks that make for great cherry blossom viewing. Piedmont Park in midtown has hundreds of trees of varying species, including Yoshino and black cherry trees. The cherry blossoms really “pop” on the northeast corner of Lake Clara Meer.

Lenox Park is a smaller, but still beautiful, Atlanta park where cherry blossoms bloom each spring. The paths, fountains, and bridges all make the park a perfect place for a stroll on an early spring day.

Gibbs Gardens is located in the small town of Ball Ground, a relatively short 45-minute drive north of Alpharetta. It’s absolutely worth the trip if you’re searching for Georgia cherry blossoms.

Designed by Jim Gibbs, Gibbs Gardens spans over 300 acres, making it one of the largest residential estate gardens in the nation.

There are 24 ponds, 32 bridge crossings, and 19 waterfalls within the confines of the gardens. The flora includes native azaleas and mountain laurels, along with millions of ferns. It is one of the largest ferneries in the nation.

There is a charge for admission and spring is a busy season at the gardens, so reserving tickets online may be a good plan.

When Do the Blooms Peak?

It all hinges on the weather. If the spring season is colder than normal, the bloom will likely occur later. Milder spring conditions will coax the blooms to peak earlier.

The timing of the blooms can also vary depending on where you are in the state. Cherry trees in southern Georgia will usually bloom a bit earlier than those in the northern part of the state. But again, there are no hard-and-fast rules when it comes to cherry blossoms. Each year is different.

If you want to see the spectacular cherry blossoms in the Peach State, make room on your calendar in March and then listen to local horticulturists. They’ll provide the most up-to-date information about when to expect the bloom to reach its peak in any given year. 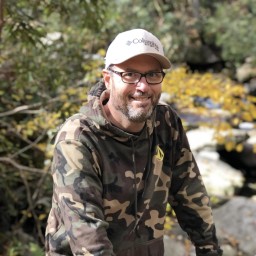 A freelance writer in Cincinnati, OH, Mike is passionate about the natural world. He, his wife, and their two sons love the outdoors, especially camping and exploring US National Parks. A former pastor, he also writes faith-based content to encourage and inspire. And, for reasons inexplicable, Mike allows Cincinnati sports teams to break his heart every year.