Written by Jesse Elop
Updated: June 13, 2022
Share this post on:
More Great Content:
Polar Bears vs. Grizzly Bears: Which Would…
Black Bear Population by State
Kodiak vs Grizzly: What’s the Difference?
Polar Bear vs Kodiak Bear: 5 Key…
Are There Grizzly Bears in Colorado?
Are Pandas Dangerous?

Grizzly bears have a reputation as ferocious, horrifying predators that most people try to avoid in the wild. Even their taxonomic name, Ursus arctos horribilis, translates to horrible bear. The incredible size, speed, strength, and senses of grizzly bears make them very capable and very dangerous. Which brings up the question just how big can they get? While large on average, in this article we’re diving into the largest grizzly bear on record.

Grizzly bears are omnivores and therefore have a diet of both plants and animals. Unlike their close relatives the polar bears, grizzly bears are hypocarnivores. Polar bears are classified as hypercarnivores because their diet consists of more than 70% meat. Grizzly bears, however, are hypocarnivores because they have a diet that consists of less than 30% meat and rely more heavily on other food sources. The 30% of their diet that includes meat consists of large prey such as moose, elk, caribou, white-tailed deer, mule deer, bison, and bighorn sheep. Grizzly bears also prey upon salmon, trout, and bass. The herbivorous component of their diet includes grasses, nuts, tubers, and various berries.

How do grizzly bears compare to other bear species?

Brown bears are one of eight species of bears. There are numerus subspecies to each species, however, including the grizzly bear. The largest of all bear species, and one of the largest land mammals in North America, is the polar bear (Ursus maritimus). Male polar bears typically weigh between 770-1,540 pounds! The largest subspecies of brown bear is the Kodiak bear which typically weighs 660-1,320 pounds! The smallest bear species is the sun bear which typically weighs between 55 and 143 pounds.

How do grizzly bears get so big?

Grizzly bears achieve their largest sizes when preparing for hibernation. Bears typically hibernate in dens, hollowed trees, and holes they dig in the ground. To learn more about hibernation and where bears hibernate, click here. Hibernation is when an animal enters a state of dormancy that slows their metabolic rate. During winter when food is scarce, grizzly bears hibernate so they can subsist off resources they accumulate and consume before winter comes. The slow metabolic rate associated with hibernation means that the bear is expending less energy by breathing slower, having a lower heart rate, and having a lower body temperature. The time before hibernation is characterized by hyperphagia, which means excessive eating. During this time, grizzly bears can pack on 400 pounds!

Grizzly bears are large in general for many reasons with evolutionary explanations. One interesting phenomenon in evolutionary biology pertaining to size is known as Bergmann’s rule. Bergmann’s rule states that species and subspecies that inhabit colder environments will be larger than subspecies that inhabit warmer environments. This is because larger and rounder animals have a better surface area to volume ratio which is advantageous for conserving heat. For example, the grizzly bear which inhabits northern environments is much larger than the sun bear which inhabits southeastern Asia.

What is the largest grizzly bear ever recorded?

The largest grizzly bear ever recorded was actually a skull found by a taxidermist in 1976! In 2014, a second largest grizzly skull was recorded from a hunter who shot a bear with a skull measuring 27 and 6/16th inches in length. Since the bears are so large and often skinned where shot, there aren’t normally weight measurements taken of these giants.

So, how much did the heaviest grizzly bear weigh? The most frequently cited giant grizzly weighed about 1,200 pounds.

That figure will vary from what you might read across the Internet. There is a common tale of a U.S. forest service worker who shot a massive grizzly that weighed 1,600 pounds. Various reports will even claim the bear was a man-eater and was brought down with a pistol. Unfortunately, these reports are fabrications of an actual hunt that shot a bear that measured 10 feet 6 inches from head-to-toe and may have weighed up to 1,200 pounds. That’s still a very large bear, but it’s a far cry from 1,600 pound claim.

It’s likely grizzlies can reach weights larger than this, so perhaps we’ll see a new record size soon. The Kodiak brown bear species has a world record weight of 1,656 pounds (more on this below).

How big are the largest of other species?

How are grizzly bears doing today?

Grizzly bear populations have been decreasing immensely in size over the past several decades. Outside of Alaska, only 1,500 grizzly bears live in the United States. The once abundant California grizzly bear that adorns its state flag is now extinct. Conservation efforts have included the establishment of protected areas and parks, protection under the Endangered Species Act, and attempts to connect populations that have been reproductively isolated due to manmade barriers. A notable organization at the forefront of grizzly bear conservation efforts in the lower 48 states is the Interagency Grizzly Bear Recovery Committee. This committee has designated five different “recovery zones” within which they implement various monitoring and conservation strategies. Grizzly bears as a subspecies do not have a conservation status listed by the IUCN Red List.

Unfortunately, there are an average of 11 bear attacks every year in the United States, as well as attacks in other countries where bears reside. The most common reason for these attacks is habitat loss due to urban expansion. When encountering a human, they may either attack to defend themselves or their young. Of the types of bears that attack in North America, brown bears are considered to be the most dangerous. The grizzly is a subspecies of the brown bear, and differs from the brown bear (the sub species) due to geographic location as well as some physical features like size and weight.

When encountering any bear in the wild–black, brown, or polar–a human should treat it as a deadly threat and act accordingly. If encountering a brown bear like a grizzly, it is advised to stay calm and slowly back away while facing the bear, speaking in an appeasing voice. If the bear continues an advance towards you, you can use bear pepper spray at a range of 10 meters, then quickly leave the area. The third option is to play dead by going into a fetal position, protecting your neck and head, and positioning your backpack to protect you if you have one. If the bear doesn’t feel threatened, it will hopefully leave.

Explore more interesting facts about bears in these articles from A-Z Animals: 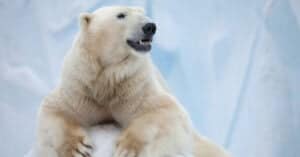