iStock.com/Weber
Share this post on:
More Great Content:
How To Keep Mice Away From Your…
Baby Mouse vs Baby Rat: What’s the…
Field Mouse vs House Mouse: What’s the…
Chinchilla Lifespan: How Long Do Chinchillas Live?
Discover Hairless Guinea Pigs: Skinny Pigs &…
Pregnant Guinea Pigs: How to Tell If…

Mice are mostly known for eating all sorts of interesting foods. They famously munch on cheese and swipe all sorts of meals from the jaws of traps. That doesn’t mean they eat anything and everything, though. That has led some people to ask, do mice eat roaches? Do they eat other creatures at all?

We’ll show you the foods that mice prefer to eat in the wild and determine if they like to eat roaches or other insects too.

What Do Mice Normally Eat?

Mice are omnivores that eat a wide variety of different foods when they’re trying to survive in the wild. Although humans tend to think of them primarily eating human products, mice have a more diverse palate than that. Some of the foods that mice like to eat the most include:

Most of the items on this list should not come as a surprise, but the last ones might be somewhat unexpected. Mice forage for most of their food, so they will pick up seeds and plants as they walk along throughout their day.

Mice also have a huge appetite for human products. You will often find mouse nests near human settlements, so mice can get free meals from garbage cans and even the bird feeders they put outside. A mouse’s sense of smell helps them find the fragrant, fatty, and salty foods that humans tend to eat.

Yet, there’s another kind of food that mice eat that’s somewhat unusual: other animals. Let’s examine this aspect of their diet a little closer.

Although we might not think of mice as having a carnivorous side to them, you have to remember that they have strong, sharp teeth. That means they have all the tools needed to eat other creatures as long as they are smaller, weaker, or not able to fight back against them.

In the case of mice, they tend to eat a few types of other creatures including insects and other small rodents. Insects in particular are a good snack for mice as long as they can catch them. A quick bite of the insect will incapacitate or kill it, and the mouse will have a nutritious meal.

Another one of the animals that mice will eat in times of dire need is other mice. Their cannibalistic nature is rooted in an attempt to survive by eating their young or the young of others.

That way, they can eat a meal while also reducing the amount of competition for their resources in the future.

Mice will also eat the carrion of dead animals. Once the animal can pose no threat to them, mice will eat them. However, you won’t spot them scavenging the bodies of deer on the side of the road. They know that most dead creatures attract predators that would eat them as well.

Yes, mice do eat roaches as long as they can catch them. The truth is that mice do not eat a lot of roaches. The insects are often too fast and agile for the mice to catch with any great frequency.

Both mice and roaches can overlap in some of the same areas. After all, mice are most active during the hours around dusk and dawn. Also, they tend to live in thick brush and fields outside as well as in human settlements.

Mice are also opportunists, and they are not afraid to take advantage of a creature in distress. If they find roaches that are stuck in glue traps or otherwise incapacitated, they will feast on them without a second thought. The fact that mice can’t eat a lot of roaches could potentially save them from some health problems though.

If a mouse ate enough roaches that had been poisoned, then it could also become sick as a result. Mice do eat roaches rarely, but you shouldn’t count on them to quell a roach infestation.

Roaches breed very quickly, easily dodge most mice, and fit into spaces that mice could never hope to get into. They are not the only insects that mice try to eat, though.

What Other Insects Do Mice Eat?

Mice have a very diverse diet that is filled with different creatures. When it comes to insects, though, mice tend to stick to somewhat helpless ones. The last thing they want is to pick a fight with a wasp and end up getting stung.

Mice tend to eat the following creatures most often:

Mice eat many different kinds of insects, and they also eat the occasional spider as well. So, roaches aren’t the only insects that have to fear these tiny rodents.

What Should You Do with a Mouse Infestation?

As we’ve already said, you should not count on a mouse infestation wiping out a roach infestation. They’re two separate problems with different but sometimes overlapping solutions. If you do find yourself dealing with a mouse infestation, you can fight back against it.

Oftentimes, the best way to deal with a mouse infestation is by investing in traps. Using simple snap traps and baiting them with a food that mice love, like peanut butter, is a surefire way to put a dent in your mouse problem. You can also lay glue traps, electric traps, and catch-and-release traps.

These different methods of ridding your home of mice are only as good as the protection you have around your home. It’s time to patch up your foundation and fix those gaps by your roof by using something mice can’t chew through, like metal.

Once that is finished, lay the traps and barrier methods, like peppermint oil, and keep mice out of your home for food.

We’ve answered, Do mice eat roaches? Yes, they will certainly eat roaches, but they probably won’t catch them very often. Yet, mice do eat a lot of other insects, such as ants and caterpillars, bugs that are less likely to get away from them. So, don’t count on mice ending a roach infestation anytime soon.

The Best Night Bulb for Your Pet Reptile 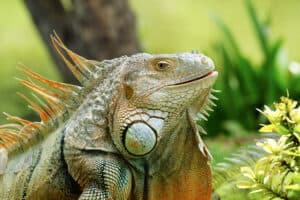 Man Records Himself Calmly Approaching 50 Rattlesnakes – Do They Bite? 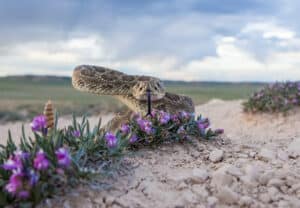 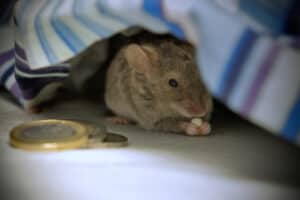 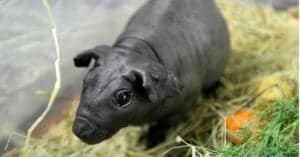