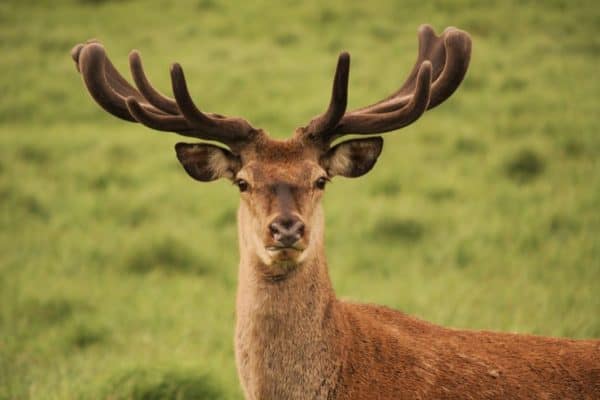 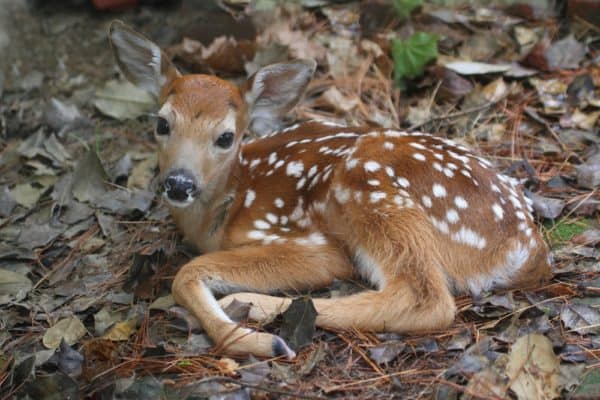 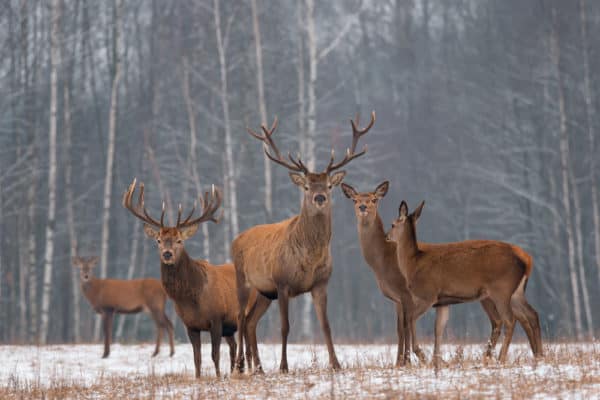 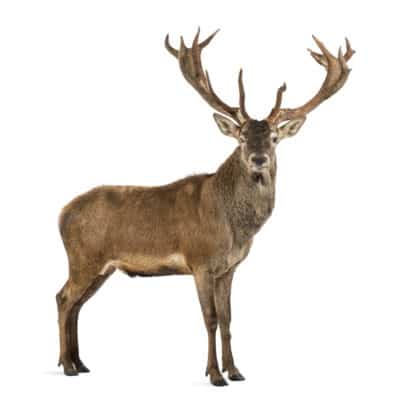 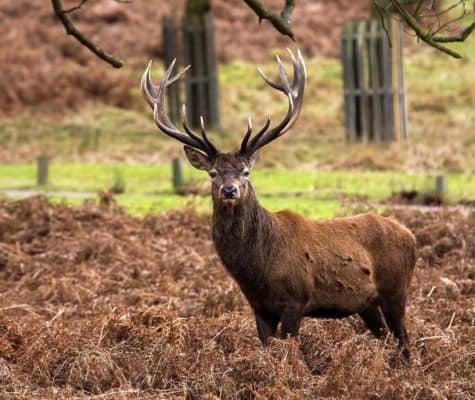 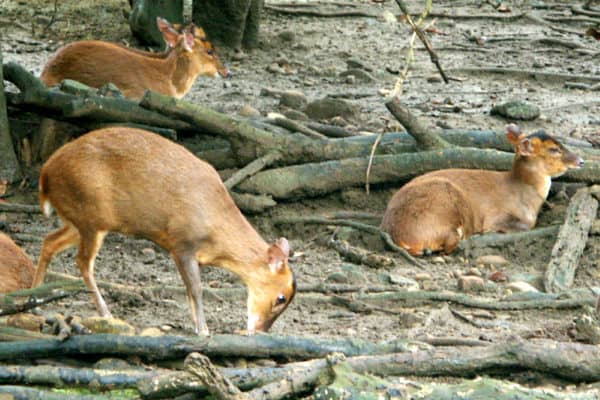 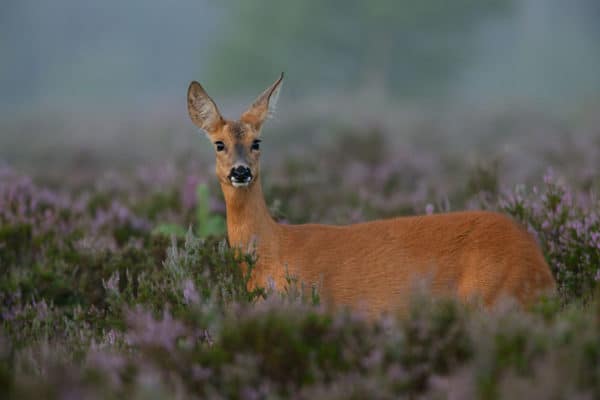 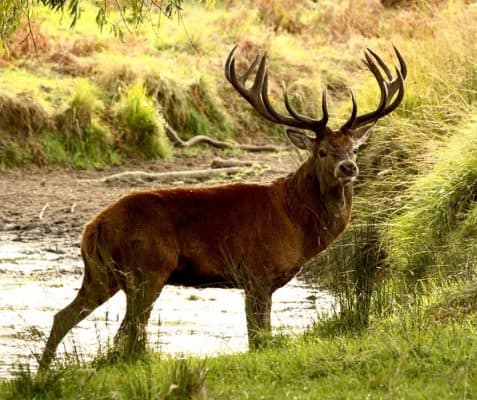 Foraging languidly among forests and plains, the deer is one of the most familiar and recognizable sights in all of nature.

The deer has proliferated across the globe and evolved many adaptations to help it cope with the rigors of a hostile world. Its regal antlers are some of the most notabled characteristics in the animal kingdom, used for defense and sexual signaling. When it is disturbed, it can spring into action with its remarkable speed, agility, and finesse. And it has evolved a unique ability to digest all kinds of vegetation. The deer is a kind of evolutionary success story.

Cervidae is the scientific name for all species of deer. It derives from the Latin word cervus, which simply means stag or deer. The Cervidae family belongs to the order of Artiodactyla, which represents all even-toed ungulates or hoofed animals with a certain kind of foot. The order includes giraffes, bison, hippos, pigs, camels, sheep, and cattle. More recent evidence suggests that cetaceans are also members of the order, since they evolved from the even-toed ungulates tens of millions of years ago.

Taxonomists generally agree that there are three subfamilies of deer. Capreolinae, which includes reindeer, white-tailed deer, and moose, are known colloquially as the New World deer. Cervinae, which features the elk, the red deer, the tropical muntjacs, and the tufted deer, are known as the Old World deer. The third subfamily, Hydropotinae, is represented by just the water deer. The terms Old World and New World do not designate the deer’s current range but rather how they evolved. They can be distinguished from each other by key differences in their skeletal morphology.

For most people, the Cervidae family is associated with the white-tailed deer, red deer, mule deer, elk, caribou, and moose. But the entire family actually contains a massive amount of diversity. Taxonomists seem to disagree on the exact number of species, but by most counts there are at least 40 still living, each one unique in their own way. Some sources put the number at more than 50 species.

Evidence from the fossil record suggests that deer likely evolved around 20 million years ago. The earliest species were probably small creatures (much like the present day mouse deer) with simple, rudimentary antlers and canine tusks. Many species flourished during the recent Pleistocene era, including the truly massive Irish elk, whose antlers may have weighed up to 90 lbs.

Most deer species share in common a basic set of characteristics: two hooves on each foot, a four-chambered stomach, long and spindly legs, short tails, and a coat color that usually varies between brown, red, or gray. They also share a proclivity for the twilight hours. But the most prominent and conspicuous characteristic is the set of antlers on the head.

This large ornamentation reveals a clear delineation between the males and the females. All male deer possess antlers, while females lack them. Only in caribou (or reindeer) do the females grow antlers as well. The water deer is the lone aberration where neither gender grows antlers. Instead, both male and female members grow tusk-like canines instead of the elegant network of antlers. This appears to reflect an earlier pre-antler state of deer evolution.

The antlers are composed of simple bone (and thus well-preserved in the fossil record) with a coat of skin and blood vessels called velvet to help them grow. It takes several months for the antlers to reach their full efflorescence, upon which time the deer will slough off the layer of velvet. The antler's main purpose is to assist the deer in combat and reproduction. As antlers require such a large investment of energy to grow, their size signals to females the reproductive fecundity and overall health of the male deer. They also help to establish social status and hierarchy in the group.

The size, curvature, and structure of the antlers are a source of immense variation between species. Some deer have a large central palmate (like moose antlers), while others have long single beams with varying numbers of branches. Some deer have nothing more than simple spikes for antlers. The reindeer have the largest antlers in relation to body size, but the moose can rival them in absolute terms.

Deer are social creatures. They usually congregate into small groups for feeding, mating, and protection. In the most densely packed areas, truly massive herds can form, depending on the abundance of food and the makeup of the deer population. Some species are migratory in nature and will travel hundreds of miles with the herd. To delineate social arrangements, deer rely on their acute sense of smell and vocal communications. Many deer have a facial gland near the front of the eyes. The gland can release a strong pheromone for marking its territory when the deer rubs its body against trees or shrubs. Other glands reside on the legs and feet.

The smallest species of deer is the humble pudu. It can range anywhere between one and three feet in length. The largest species of Cervidae is the moose. It can reach 10 feet long and weigh up to 1,800 lbs. In between these two extremes lies the common white-tail deer, whose height and weight is about the same as a human. Male deer tend to be larger than females in almost every species.

Deer are present on nearly all continents on earth, including large unbroken expanses of North America, South America, Europe, and Asia. Africa is an exception. It contains only a single species of native deer, the Barbary red deer. Australia has no native species, but several have been introduced into the wild. Deer thrive in deciduous forests, tropical rainforests, wetlands, and grasslands. A few species inhabit the cold tundra of the north, feeding on the sparse vegetation. The deer are most frequently found in the areas between forests and open plains. They are also capable of adapting to urban and suburban settings, which means that some species can thrive despite human encroachment.

The deer’s diet consists almost entirely of leaves, grass, lichen, buds, fruit, and herbs. The deer family is a type of ruminant — a mammal that has the capacity to break down and ferment plants with its four-chamber stomach. Each chamber contains various microbes to assist with this task. After the food is processed by the first stomach, the deer will then regurgitate it as cud and attempt to chew through the tough plant material. The food then proceeds through the remaining chambers of the stomach for digestion. However, unlike many other ruminants such as sheep and cattle, the deer palate is more selective. They prefer high-quality food that’s easier to digest. This is due to the large amounts of energy and nutrition needed to grow antlers.

Deer are a critical food source for many predators in the wild, including bears, mountain lions, jaguars, tigers, lynx, coyotes, wolves, and large raptors. Birds and small mammals may feed on the carcass of a deceased deer. Individual deer, especially young fawns, are susceptible to predation. They aren’t completely defenseless against ferocious predators, but when given the choice, they will usually prefer to run. White-tailed deer have the ability to sprint up to 30 MPH. They can also leap immense distances up to 30 feet. If a nearby threat is spotted, deer may attempt to warn nearby members of the herd. The more solitary moose is protected by virtue of its size.

Since humans first evolved, deer have been historically an important source of food, clothing, and material to most societies. Modern hunting and habitat loss have threatened some species of deer, particularly in South Asia and the Pacific region, but with responsible stewardship, deer numbers can be maintained at healthy numbers. Climate change presents an acute problem as well. As the deer’s natural habitats change, it will force many of them to venture farther to the north.

Other sources of danger include ticks, lice, parasites, and disease. Some of these diseases can be passed on to other types of animals, particularly livestock.

The deer’s breeding season takes place every year for only a short amount of time. Most species pursue a reproduction strategy known as polygyny in which a single dominant male will have multiple female partners. Only a few species prefer to be monogamous. Because competition can be fierce, males tend to exhibit aggressive tendencies throughout mating season, as they try to guard their territories and mates from potential rivals. As mentioned previously, antler size is a significant determinant of reproductive success.

Once a female deer is impregnated, the gestation period can last anywhere between six to eight months. Mothers will tend to produce one or two offspring at a time. Less commonly, the doe will produce three offspring. The young deer are known as fawns or calves, depending on the size of the species.

While out foraging, mothers will hide the fawn in nearby vegetation until the young animal is strong enough to begin walking on its own power. The fawns are often born with white spots to provide camouflage from predators. The offspring are weaned at two to five months, but they may stay with the mother up to a year. Males often play minimal roles in raising the young fawns.

After the first year of life, males will begin to grow their antlers on an annual basis. Deer can live around 12 years in the wild, give or take a few years, but hunting, predation, and vehicle collisions can greatly truncate the length of their lives. Many do not live beyond their fifth year of existence.

Due to commercial exploitation, populations of many deer species fell in the early and mid 20th century. But thanks to conservation efforts, populations have rebounded. Some estimates put the population size of the common white-tailed deer at around 30 million. Overpopulation has actually become a significant problem, since humans have hunted many of the predators that keep deer population in check. Therefore, regulated hunting is encouraged in many states as a means of population control.

The Americas are rich in several species of deer. The white-tailed deer occupies a large range between the South American coast, Central America, the eastern United States, and parts of Canada. The mule deer tends to occupy the western United States and overlaps with the white-tailed deer in some places. Enormous clusters of deer, including white-tail deer, mule deer, caribou, moose, and elk, congregate in the national parks of western Canada.

Despite their ubiquity, many species and subspecies of deer are under threat. The Persian fallow deer, Chilean huemul, Kashmir stag, Indian hog deer, Bawean deer, and Eld’s deer are either endangered or critically endangered. The reindeer, water deer, barasingha, and others are approaching vulnerable status. Pere David’s deer, which is native to China, was declared extinct in the wild, but attempts have been made to reintroduce them back into their natural habitat.

What is a zombie deer?

Zombie deer is the colloquial name of a real health condition known as chronic wasting disease. The cause is related to malfunctioning proteins that begin to fold into unusual shapes. Common symptoms include weight loss, over-aggression, poor coordination, and eventual death. The disease can spread to other deer through direct contact with infected tissue or fluids.

Deer have a natural instinct to run away from potential threats, so direct contact with people is uncommon. However, due to their size and antlers, they should be approached with caution. Larger species such as moose have been known to cause injuries.

What is the plural of deer?