Is Squash A Fruit Or Vegetable?

iStock.com/pilipphoto
Share this post on:
More Great Content:
Is Hibiscus a Perennial or Annual?
Rose Of Sharon vs. Hardy Hibiscus
7 Extinct Trees
Are Mushrooms & Other Fungus Plants?
The 5 Best Annual Flowers For Zone…
Are There Any Plants That REALLY Keep…

Squash has been around for centuries and there are so many varieties that it’s hard to name them all! It has been considered a vegetable for a long time because of its earthy flavor and the different ways in which it is cooked, but squash actually grows the way that a fruit does. So, which is it? Is squash a fruit or a vegetable?

Is Squash a Vegetable or a Fruit?

From both a culinary and a botany standpoint, squash is both a vegetable and a fruit! But how exactly is that possible? Let’s find out!

Scientifically, and from a botany point of view, squash is a fruit because of the way that it grows. Fruits, including squash, come from the flower of a plant and have seeds that are edible. In contrast, vegetables are any other part of the plant, such as the leaves, the roots, or the stems. Technically speaking, because of how it grows, squash is a fruit!

However, when it comes to cooking, squash is largely considered a vegetable. It tastes savory and earthy, the way we usually expect vegetables to taste, and not fruit. Squash can be grilled, baked, roasted, boiled, and fried like most other vegetables!

The only exception to this rule is the pumpkin. Yes, pumpkins are one of the many different types of squash and the most popular way of using pumpkin in the kitchen is in pie. Generally speaking, pies can only be made from fruit, which marks one of few culinary ways in which squash is considered to be fruit.

What Are the Different Types of Squash?

Like most vegetables, there are several varieties of squash in the world. Just about all of these varieties can be divided into two categories, based on what time of year they are harvested: in the winter or in the summer.

Winter squash are known for their tough and/or bumpy skin and their often odd shapes. Examples of winter squash include butternut squash, honeynut squash, and pumpkins.

What Are Some Examples of Squash?

Even though all squash can be divided into a winter squash or summer squash category, there are still countless squash varieties out there!

Pumpkins are indeed a type of squash but in and of themselves, there are many different varieties of pumpkins. These varieties can be used in different ways for different purposes. Pumpkins are also known for growing in a myriad of colors, including orange, red, blue, green, and white.

Yellow squash, crookneck squash, and zucchini are all types of summer squash.

Yellow squash is small in size and, you guessed it, yellow in color. Crookneck squash look very similar in color, size, and shape, but they have bumpy ridges along their tougher skin, and their tapered ends curve to one side. While maintaining the same size and shape as yellow squash, zucchini is green in color.

Where Does Squash Come From?

All of the types of squash we use and eat nowadays can trace their origin to the American continents, specifically Mesoamerica. In fact, the name “squash” comes from the Narragansett Native American word askutasquash, which means “eaten raw or uncooked.”

As a whole, the natural range of squash reaches from southern edges of North America all the way down to Argentina. The highest species diversity is found in Mexico, which is where many scientists believe the squash originated. By some estimates, squash is around 10,000 years old.

When the Europeans came to the Americas, they embraced squash in their diets as squash was one of few crops that could survive the harsh winters of the north and southeast. Over time, they were able to bring the squash to Europe. In Italy, the zucchini was cultivated and eventually became the zucchini that we know today!

What Are the Health Benefits of Squash?

There are many different health benefits of squash. Squash is high in nutrients and vitamins, each of which provides its own particular benefit.

A regular diet of squash can improve eye health through the beta-carotene and vitamin C found in the fruit. These nutrients can be known to reduce the progression of macular degeneration and prevent cataracts. In addition, the beta-carotene found in squash can also help protect the skin from sun exposure, though it isn’t as strong as topical sunscreen!

You’ll want to be careful when consuming large amounts of beta-carotene: while it can provide many benefits and is found in high amounts in squash, certain studies have shown that consuming too much of it can increase the risk of lung cancer.

Squashes also have plenty of antioxidants. An antioxidant helps your cells and delays or even prevents damage to them. In addition to antioxidants, squashes also contain many different vitamins, like vitamin C and vitamin B6. Vitamin C aids the body in restoring and repairing cell tissue, while vitamin B6 has been known to help combat depression.

Squash is high in fiber, which helps with digestion, and summer squash has a high water content which means it is low in calories.

Other nutrients that can be found in squash include iron, calcium, magnesium, and vitamin A.

Is squash a fruit or vegetable?

From both a culinary and a botany standpoint, squash is both a vegetable and a fruit!

What are considered winter squash?

Discover the Only Two Animals the Pilgrims Brought on the Mayflower 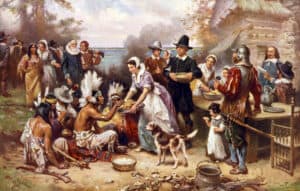