Some jobs are best left for the pros—in this case, swimming underwater with a wild crocodile just after an attack on the team’s cameraman. They are out there looking to study the croc’s eyesight and decide that they should focus their expedition on the territory of a large female croc.

Her name is Tutwana. The team expresses their sentiments about this next mission, open about their collective nervousness. Since they know Tutwana already, they believe that she might allow them close enough to study her.

The water is quite clear but gets murky when the sand at the bottom gets kicked up. The divers are in full gear with cameras in tow and they’re staying close to the bottom, so as not to be mistaken for prey.

It takes them only a few minutes before they find Tutwana. They focus on the croc’s gleaming white teeth, sharing that crocs always keep a fresh, razor-sharp supply, growing new ones every 10 months.

“I am petrified,” says the diver as he swims mere feet from this wild croc. Although fearful, he can’t show it. He has to keep calm, keep out of striking range, and follow the appropriate diving protocol in that situation.

“I still feel I’m too close,” he says as they capture the amazing footage they set out on this expedition for. “This looks huge. It’s, uh, bigger than me,” he says as he keeps filming Tutwana. He realizes the power that she has and that if she chose to strike, he’d be defenseless.

Much to their surprise and relief, Tutwana gives no indication that she’s interested in attacking any member of the team. He notices that her eyelids are glazed over and just as he’s reporting what he’s seeing, she starts backing up toward him and turns around to pass right next to him.

You can hear the fear in his voice as he says, “Oh, my god, this is so close.” She goes straight past his head and he’s certain that she knows the divers are there. He says he feels certain she can tell she’s being watched.

Ultimately, that’s one of the big questions. How well can crocs see? The team reckons Tutwana can see the team moving close but likely has no idea what she’s looking at.

Meet the Largest Otter That Ever Lived, a 440lb Giant 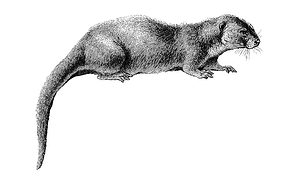