The savannas and grasslands of Africa manage to support dozens of grazing herbivores, with enormous monsters like the rhino and elephant managing to live largely in peace with impala and wildebeests. But research into the habits of the zebra suggests that such a balance couldn’t exist without them. Apart from their distinct black and white stripes, these equines have a distinct resemblance to wild horses in terms of temperament, appearance, and diet. And just like horses, they subsist primarily on a diet of grasses. But where they differ from fellow grass-feeding herbivores is in their preference for long rather than short grass. That leaves zebras with few competitors for food, even as they spend up to 18 hours a day feeding.

That’s a sharp contrast from zebras in captivity who only eat once a day — but zebras in the savanna have actually adapted to prefer grass that has little nutritional value. Many zebra species live in arid environments where rain can be scarce, and the stomachs of zebras have adapted to digest coarser and more fibrous plant matter and transform it into fuel more efficiently. This type of grass is indigestible to many other animals in the savanna, but zebras have trouble digesting shorter grasses that are higher in nutrients — and higher in protein — that other grazers prefer. But since there’s little competition for their preferred food sources and these taller grasses are better equipped to survive droughts, zebras are built to survive in a wider range of environments and in more dire circumstances than other grasslands grazers.

But hard times can also demand a change in appetite. While 90% of a zebra’s diet will consist of various types of grass in the savanna, they’re also known to eat shrubs, branches, and even small trees. When circumstances become especially lean, zebras can be seen stripping bark from trees for a meal. Zebra teeth have adapted to their environment in much the same way as their stomachs have. Sharp incisors cut apart rough grass and shoots that are then pulverized by the heavy molars. To accommodate for all that chewing, a zebra’s teeth will continue to grow throughout its whole life. The miraculous physiology of the zebra ensures that food is usually readily available, but the real threat in the wild is finding water. While zebras can survive as long as three days without hydrating, they need regular access to water to thrive. That’s not always easy in the arid grasslands that zebras often call home.

What do zebras eat? Zebras in the wild eat a diet that includes:

How Do Zebras Forage For Food?

There are three different species of zebra — and each of them has developed unique foraging habits as a necessity of their circumstances. In turn, these behaviors also have a critical impact on the larger ecosystem. The common zebra is the most prevalent species and the most widely spread as well. Their habitats extend throughout much of southern and eastern Africa, and they make the most of that space. Plains zebras gather together into migratory harems and live a nomadic existence following water sources and rain clouds. These journeys will often take them beyond the grasslands into forested and mountainous regions, and the environment benefits from their wide wandering range. They’re often referred to as “pioneer grazers” because they clear out the long grass for other herbivores with more delicate stomachs.

Mountain zebras adopt a very different tactic to staying hydrated. Found in the rocky hills and mountains of Angola, their environment forces them into smaller family groups than their plains counterparts. It also forces them to be a bit more creative with their feeding habits. These equines will resort to browsing on twigs and other parts of the tree when necessary, and they use their hooves to dig for water in their rocky environments. Mountain zebras are also migratory even though their migration path is much shorter than the plains zebra.

Grevy’s zebra is the most endangered species, and they’re unique from the other two species in that they don’t gather together in structured harems. Instead, these zebras will gather into formal packs out of the necessity for shared resources, but they lack the social complexities of other zebra herds. These loners don’t migrate either. Instead, they will establish semi-permanent territory with a nearby water source.

The great migration of zebras is a necessity for seasonal survival, but it’s one that forces these equines to cover 300 miles of territory. It’s a journey that also makes them vulnerable to countless predators. Large cats constitute some of the most fearsome of these threats. Leopards and cheetahs have been known to separate and incapacitate old, young, or weak zebras — but both cheetahs and lions can take down one or more fully grown zebra when they coordinate in prides. Hyenas will gather together in packs as large as 20 to bring down zebra adults. Even the water poses danger to zebras. Their migration patterns have them following rain clouds and moving water, but getting too close often means getting within range of Nile crocodiles. They like to wait in ambush and strike out when zebras venture close to feed or to ford a river or stream.

In the past zoologists believed a zebra’s stripes served as camouflage, confusing predators. The wavy stripes of a zebra help the mammal blend in with tall grasses. Recent studies, however, suggest that this is a myth. In open spaces where zebras spend most of their time grazing, lions can see the outline of a zebra just as well as prey lacking stripes. While stripes may not confuse large predators, they actually fend off smaller ones: flies. Apparently, the stripes disorient flies, causing them not to land on zebras. Since horse flies carry deadly diseases in Africa, this new research suggests zebra stripes aid in survival. A study was done where horse flies landed on zebras and horses. It revealed that horse flies only landed on zebras one fifth as often as they landed on horses.

If you are a fan of these striped equines, find out more below!

Zebras are strict herbivores. They have powerful teeth and jaws designed for crushing rough plants, but their teeth would be highly ineffective at killing prey or ripping apart fresh meat. And the unique stomachs that allow zebras to digest low nutrition grass in huge quantities simply aren’t designed for processing meat.

While zebras might occasionally find a snack in the form of fallen fruit, it’s not frequent enough to be considered a part of their normal diet. Zebras in captivity are sometimes given fruit like apples as a treat.

What type of grass do zebras eat?

What do zebras eat in the wild?

The vast bulk of a zebra’s diet consists of grass. They supplement this with shrubs, herbs, roots, and other vegetarian food sources. Some species of zebra will rely on browsing when grazing options aren’t readily available. 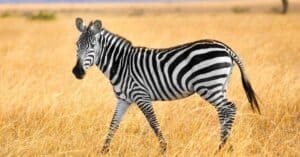 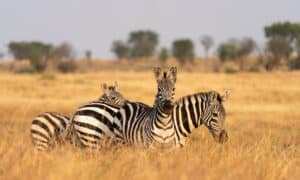 Watch a Zebra Escape a Gang of Ambushing Crocodiles 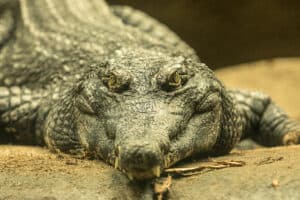 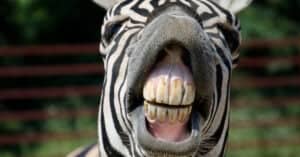 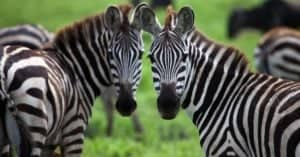 Zebra Poop: Everything You’ve Ever Wanted to Know