Spok83/Shutterstock.com
Share this post on:
More Great Content:
26 Extinct Types of Frogs!
Toad vs Frog: The Six Key Differences…
Frog Poop: Everything You've Ever Wanted to…
Axolotl Colors: The 10 Types of Axolotl…
What Do Axolotls Eat?
Are Toads Poisonous or Dangerous?

Did you know that the baby axolotl stays a “baby” forever? It’s true! These amphibians never progress past their larval stage. Although they are critically endangered in the wild, they are among the most popular exotic pets on the market today.

Are you ready to learn five mind-boggling facts about the baby axolotl? Let’s get started!

#1: A Baby Axolotl is Called a Larvae!

Would you believe that baby axolotls are simply called larvae?

Baby axolotls are members of the salamander family. They come from slime-covered eggs and take about two weeks to hatch. Unlike other salamanders, though, axolotls never undergo metamorphosis. This means they never progress past a larva. Instead, they stay at this stage forever, which is a phenomenon called neoteny.

Baby axolotl hatchlings aren’t the only animals called larvae. Scientists say that any animal who must undergo drastic change to reach adulthood shares the name. An example of such an animal is a frog, which grows from a tadpole to an adult.

Female axolotls have a big job ahead of them when it’s time to lay eggs. Like many amphibians, axolotls are known to produce several hundred eggs at a time. In some cases, clutches can consist of 1,000 or more eggs!

What’s even more astounding is that most of these eggs survive. Researchers say that typically, around 95% of baby axolotl eggs hatch. The average 5% of eggs that don’t hatch are held back by genetic mutations or abnormalities. However, viable axolotl eggs are not 100% safe from threats.

One of the biggest threats to unhatched larvae eggs is adult axolotls. These animals are carnivorous and well-known for eating their eggs. Consequently, when bred in captivity, adult axolotls are removed from tanks containing eggs. Once axolotls are grown they can live for a long time, axolotl lifespans can exceed 20 years when well-cared for!

Axolotls remain larvae forever, which is perhaps one of the most interesting things about them. Scientists say that these amazing creatures are closely related to the tiger salamander. Even though axolotls typically forego their metamorphosis, transformation can happen with a shot of iodine.

When a baby axolotl receives a shot of iodine, it transforms into a type of salamander. While the creature they become closely resembles a tiger salamander, the animals are not identical. Instead, the evolved axolotl has a shorter lifespan. This means that they only live for about one to two years after their transformation. However, the animals are close enough in genetics that they can successfully mate.

Rarely, a baby axolotl can metamorphose into a salamander without influence. Since axolotl larvae have gills, they can only survive underwater. When they transform, however, they lose their gills. This means they migrate to land where they breathe air using their lungs.

#4: Baby Axolotls are Critically Endangered (In the Wild)

Although axolotls are a popular pet, they are not plentiful in the wild. According to the International Union for Conservation or IUCN Red List, both baby and adult axolotls are critically endangered. Even though the species isn’t at risk for extinction, conservation efforts are still important.

One of the biggest contributing factors for this amphibian’s conservation status is the degradation of their habitat. Water pollution caused by communities in Mexico poisons the water they call home, which kills off populations. Additionally, foreign predatory fish like the African tilapia and Asian carp prey on them.

Conservationists understand the importance of preserving axolotls’ population in the wild. Luckily, there are several ways they can combat their extinction. For example, water filters help clear pollutants. They also prevent predatory fish from killing wild axolotls. Lab-bred baby axolotls are also released to encourage population growth and breeding.

#5: Axolotl Larvae Are Only Born in One Place!

Did you know that baby axolotl larvae only live in one place in the entire world? It’s true! Previously, these amazing aquatic amphibians lived in two high-altitude lakes in Mexico City. However, when authorities drained Lake Chalco due to flooding, all the axolotl living there perished. Consequently, today they are only found in Lake Xochimilco, which is in southern Mexico City.

The Mexican government is proud that these astounding creatures call their country home. So much so, in fact, that the new Mexican 50 peso bill sports an image of an axolotl. 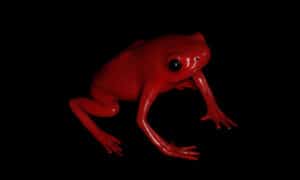