Found across the North American wetlands!

Click through all of our Tiger Salamander images in the gallery. 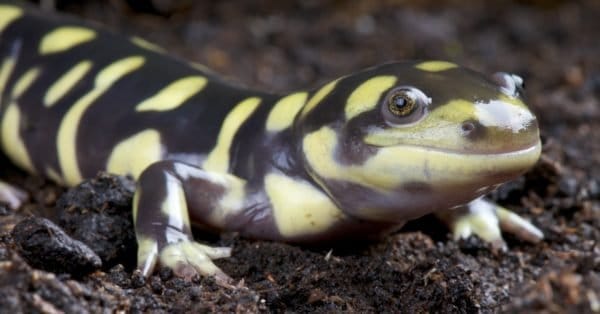 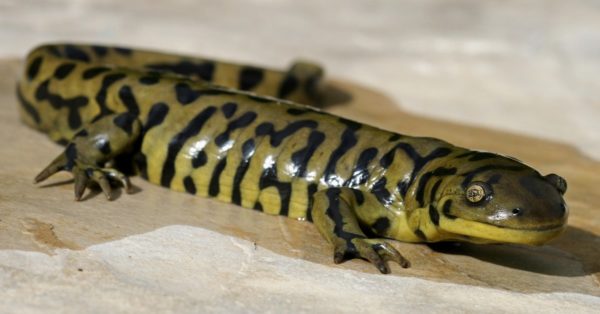 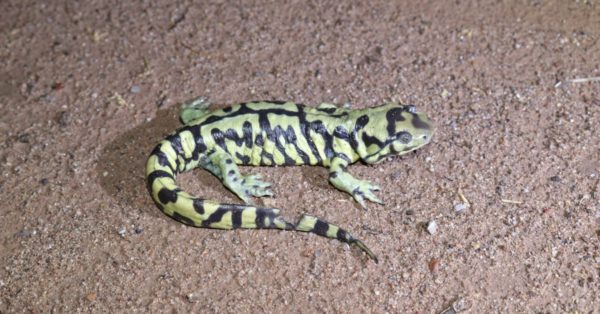 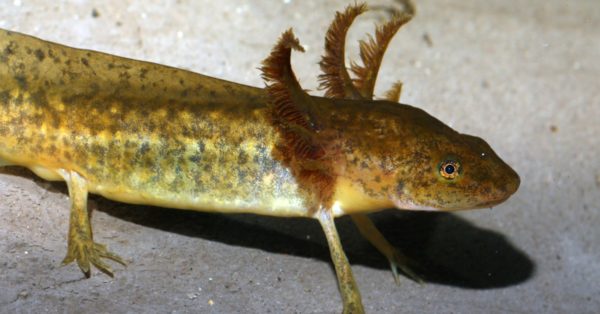 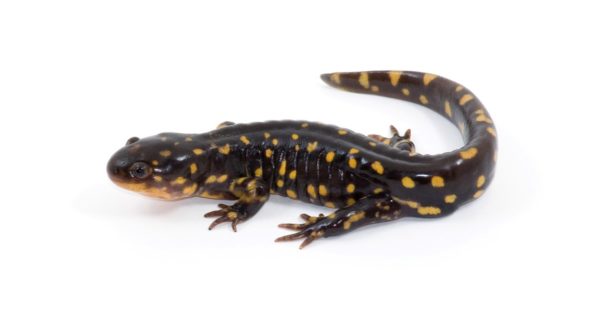 View all of the Tiger Salamander images!

The tiger salamander is among the largest terrestrial amphibians of North America.

Found almost anywhere with a suitable climate and sufficient bodies of water, the tiger salamander undergoes a remarkable transformation early in its life as it makes the transition between water and land. Although very susceptible to habitat degradation and high levels of acidity, the tiger salamander has managed to endure and thrive across the continent.

The tiger salamander was once represented by a single unified species called Ambystoma tigrinum. This group had many different subspecies within it, including the California tiger salamander, the plateau tiger salamander, the eastern salamander, and the western or barred salamander, but after careful genetic analysis, it was determined that many of these groups should be spun off into their own separate species. Although these new species are geographically isolated, they are fairly similar and still appear to be capable of producing hybridized offspring with each other.

The tiger salamander has a rather short, rounded snout, strong legs, a thick head, and a long tail. The exact colors and patterns vary throughout the entire range based on the species, but the base color of the body is usually brown, green, or gray. This is overlaid with bright yellow or duller brown dots or stripes, which give it to the name. The average size of the tiger salamander is about 6 to 8 inches in length and 4.4 ounces in weight, or about the same weight as a teacup. The largest specimens can grow up to 14 inches in length, which is very large for a salamander.

As with all other members of the mole salamander genus, this species spends most of its life in underground burrows extending about 2 feet down to escape the temperature fluctuations near the surface. Whereas many other species of mole salamanders are drawn to abandoned burrows, the tiger salamander digs its own burrows right beside a large body of water. The creature rarely ventures out of these holes except to feed at night or to mate, which can make them very difficult to find. In fact, this reclusive salamander has very little social contact even with members of its own species outside of the breeding season.

The skin is an important element of the salamander’s survival. It serves as the main means of respiration. Chemicals released from the skin are an important signal in the mating season. And in order to defend itself against predators, the tiger salamander produces a toxin from its tail gland. When the salamander is threatened, it will rear up and display the gland, sometimes squirting the toxin directly at the predator. Although not deadly, this substance produces a very painful stinging sensation. The markings and colors serve as a warning to avoid the salamander altogether. Many predators will learn this painful lesson.

As perhaps the most common and prolific salamander species in North America, the tiger salamander occurs throughout most of the United States, Canada, and Eastern Mexico. Each species or subspecies has a different geographical range, which is usually indicated by its name (eastern tiger salamander, western barred tiger salamander, California tiger salamander, etc). But regardless of species, this salamander’s preferred habitats are grasslands and woodlands right next to ponds, lakes, and streams with loose soil in which to dig. It thrives best with a consistent temperature and humidity.

The tiger salamander plays an important part of the food chain by keeping common prey populations in check. When nighttime arrives, it comes out of the burrow and begins hunting for food.

What does the tiger salamander eat?

The tiger salamander will consume almost anything it can find, including worms, frogs, insects, snails, slugs, fish, and even other salamanders. If there isn’t enough prey in the area, then the tiger salamander may resort to cannibalizing other members of its own species.

The tiger salamander faces many threats in the wild, including predation, pollution, deforestation and habitat destruction, high acidity levels in their breeding pools, and even vehicular accidents. Acid rain was a particular problem before the implementation of the Clean Air Act of 1990, which, according to the National Geographic, cut sulfur dioxide emissions by 88% as of 2017. Nitrogen dioxide levels also fell by 50% in the same period.

What eats the tiger salamander?

An adult tiger salamander is preyed upon by birds (such as owls), turtles, snakes, badgers, and bobcats. The larvae are also vulnerable to aquatic insects and snakes.

The tiger salamander initiates the reproductive process at some point between late winter and early spring when they migrate to their collective breeding pools. The courtship process involves a complicated set of behaviors. After the male finds a suitable mate, he will nudge her with his head to express his interest. She reciprocates this behavior by nudging the male’s vent area, inducing him to release his sperm material, which the female will then collect. The competition for females is so fierce that some males will interrupt the courtship process of another male and attempt to substitute his own sperm instead.

After a very short gestation period of only one or two days, the female lays up to 100 eggs at a time and then secures them to twigs, grasses, and leaves at the bottom of the pool. She can deposit multiple masses of eggs in a single breeding season to ensure the viability of the next generation. Many of these young are not expected to survive, and the parents provide no particular protection for them. The reproduction strategy is based upon sheer numbers.

After an incubation period of about four weeks, the larvae emerge from the eggs with a yellowish or olive body, dark blotches or stripes along the side, a white belly, large external gills, and an aquatic tail. They spend most of the spring and early summer period feeding and growing in the original pool of their birth. At about two to five months of age, they undergo a transformative metamorphosis by which they reach their adult phase. As they adapt to a new terrestrial life, the salamanders fully lose their gills and develop a set of lungs to breathe.

If conditions on land are particularly poor, then the larva may delay metamorphosis for as long as necessary so they can continue to live underwater. Although they are still able to sexually reproduce, these salamanders maintain the same basic physiology as their larval stage through a process known as neoteny. The salamanders can be stuck in the larval form for months, years, or even their entire lives. However, they still retain the option to undergo metamorphosis at any time once conditions improve.

If they survive the juvenile stage, when many of them fall victim to predators, the average salamander reaches sexual maturity at around four to five years of age. This species has a lifespan of 10 to 16 years in the wild – relatively long-lived for a salamander. Some individuals have been known to live almost 25 years in captivity.

These animals are currently considered to be a species of least concern by the IUCN Red List. It is not quite known how many of these salamanders exist in the wild, but population numbers appear to be stable, despite some populations being isolated and fragmented from each other. The decline of pollution, acid rain, and habitat destruction have helped to secure the future of this species.

Tiger Salamanders in the Zoo

Because of this animal’s reclusive nature, the best chance you may have to see one is in a zoo. They can be found at the Saint Louis Zoo, Central Florida Zoo and Botanical Garden, Zoo Atlanta, the Maryland Zoo, Louisville Zoo, Utah’s Hogle Zoo, San Francisco Zoo, and the Smithsonian’s National Zoo in Washington, DC.

Tiger Salamanders are Carnivores, meaning they eat other animals.

What Kingdom do Tiger Salamanders belong to?

What class do Tiger Salamanders belong to?

What phylum to Tiger Salamanders belong to?

What family do Tiger Salamanders belong to?

What order do Tiger Salamanders belong to?

What type of covering do Tiger Salamanders have?

What genus do Tiger Salamanders belong to?

In what type of habitat do Tiger Salamanders live?

What is the main prey for Tiger Salamanders?

What are some predators of Tiger Salamanders?

Predators of Tiger Salamanders include raccoons, coatis, and river turtles.

How many eggs do Tiger Salamanders lay?

What is an interesting fact about Tiger Salamanders?

What is the scientific name for the Tiger Salamander?

The scientific name for the Tiger Salamander is Ambystoma tigrinum.

What is the lifespan of a Tiger Salamander?

Tiger Salamanders can live for 10 to 15 years.

How fast is a Tiger Salamander?

A Tiger Salamander can travel at speeds of up to 10 miles per hour.

What do tiger salamanders eat?

The tiger salamander consumes worms, frogs, insects, snails, slugs, and fish. If it’s desperate for food, then it might resort to consuming other members of the same species.

How do you create a tiger salamander habitat?

If you plan to own a pet salamander, then the most crucial step is to replicate its natural environment as closely as possible. According to the website The Spruce Pets, that will require two different tank setups. When it’s in the larval stage, the salamander requires an aquarium with about 6 inches of water, a high-quality water filter, sporadic rocks in which to hide, and a temperature between 65 and 70 degrees Fahrenheit. Once the salamander undergoes metamorphosis, you should begin to reduce the amount of water in the aquarium. Upon reaching its full adult terrestrial phase, this salamander needs a 10-gallon tank, partly covered in water and partly dry land, with plenty of vegetation and rocks. It also needs some kind of soft soil in which to burrow, but don’t make it too firm. The temperature should be kept at around 50 to 75 degrees Fahrenheit with 70% humidity. It does best with about 12 hours of light and 12 hours of darkness every 24 hours.

How do you take care of a tiger salamander?

The tiger salamander is a high maintenance pet that requires constant attention and care paid to its diet and tank conditions. Once you set up the tank and achieve the right temperature and humidity, you will still need to clean the interior every two months, preferably with hot water and no detergents. As a larva, the salamander should be fed insects, worms, brine shrimp, and small fish. As an adult, earthworms, crickets, and other insects should be sufficient. But be careful not to overfeed it, because this salamander does have a tendency to gain weight.

Yes, the tiger salamander has a tail gland that produces a toxic milky substance. The toxin is not deadly, but it may burn the skin.

If you’re willing to devote the time and attention to its proper care, then the tiger salamander can thrive in captivity. It is among the more popular exotic pets because of its easygoing personality, its relatively long lifespan, and its fascinating behavior. Given enough time, it should become used to its owner and even respond positively to your presence. However, due to the sensitive skin, you should be careful about handling this creature.