iStock.com/NORRIE3699
Share this post on:
More Great Content:
Toad vs Frog: The Six Key Differences…
Frog Poop: Everything You've Ever Wanted to…
Axolotl Colors: The 10 Types of Axolotl…
Are Toads Poisonous To Dogs or Cats?
Are Toads Poisonous or Dangerous?
The 10 Largest Frogs In The World

The axolotl (pronounced ax-oh-lot-ul, after the Aztec god of fire, lightning, and death) is a bit of an ecological oddity. Native to the freshwater rivers and lakes in the middle of Mexico City, these unusual salamanders are extraordinary in more ways than one. When threatened by predators, they can shift colors slightly to blend in with the surrounding environment.

Moreover, unlike many other amphibians, they undergo a process of incomplete metamorphosis in which they retain juvenile characteristics such as fins, webbed feet, and gills (the feather-like stalks on the head) into adulthood. The technical term for this is neoteny. It allows them to maintain an underwater aquatic lifestyle well after their juvenile stage is finished (though they do have lungs as well as gills to breathe air). But perhaps their most unusual and fascinating trait is that they have the ability to regenerate entire limbs, lungs, hearts, spines, and parts of the brain while retaining all their normal functions. It’s estimated that these highly resilient animals are a thousand times more resistant to cancer than your average mammal.

The species is relatively young, in geological terms, having only evolved in the last 10,000 years or so from the closely related tiger salamander of the Americas. Unfortunately, the damaging effects of habitat loss, poaching, and pollution (to which it’s particularly prone) have nearly driven this species to extinction; it is classified as critically endangered by the IUCN Red List. The axolotl has also spread throughout the world as pets and laboratory animals (since scientists are interested in their unusual properties). Unfortunately, because of their rarity, we don’t know that much about the natural ecology or habits of the axolotl in the wild, but their diet has been studied in some basic detail. This article will cover what they eat, how they obtain their food, and how to feed them as pets.

What Does the Axolotl Eat?

The axolotl is a carnivorous predator. It eats a mixture of insect larvae (such as mosquitoes), worms, snails and other mollusks, tadpoles, and small fish in the wild. Their diet appears to be particularly heavy in worms, but they’re not exactly picky about what kinds of foods they consume. These generalists will eat just about any kind of animal that will fit into their mouths. It’s even been observed that they will engage in acts of cannibalism, sometimes gnawing off parts of their own siblings if other food isn’t available. This has been suggested as one reason for its amazing regenerative abilities. However, as carnivores, they do not eat any kinds of plant matter at all.

What Do Axolotls Eat as Pets vs. in the Wild?

If you own a pet axolotl, then most experts will recommend that you should attempt to replicate its natural diet as much as possible. It is usually fed some combination of earthworms, bloodworms, brine shrimp, and daphnia (a small aquatic crustacean). They also seem to enjoy lean pieces of beef and chicken. However, you should avoid the temptation to feed them too much live food, which may accidentally spread parasites and diseases. Instead, freeze-dried foods or pellets generally work better. Make sure the substrate is composed of very small gravel or rocks, safe enough to eat because the axolotl will usually ingest them as well. Larger pebbles and rocks may be dangerous to its health.

One scientific study attempted to answer the question of whether a juvenile axolotl does best with a diet heavy in bloodworms, lots of daphnias, or a mixed diet with equal amounts between the two. The results of the study seemed to suggest that the juvenile grew fastest with an unchanging diet heavy in bloodworms. This seemed to produce better results than a diet heavy in daphnia. A mixed diet of both bloodworms and daphnia seemed to produce mixed results – better than a daphnia-only diet but worse than the bloodworms. While this study didn’t exactly offer dietary advice, it does suggest that a bloodworm-heavy diet may be optimal to support a growing juvenile.

The amount of food will change naturally throughout the animals’ life as well. Baby axolotls should be fed daily to support their growth and development. Adult axolotls need to eat less often, perhaps one or two servings every other day. In fact, they can do just fine for up to two weeks without eating any food (although this shouldn’t be tried at home). It’s actually a bigger problem if you accidentally overfeed your axolotl because it can lead to constipation and gastrointestinal blockage.

How Does the Axolotl Eat Food?

In the wild, the axolotl has the ability to easily locate food along the muddy bottom of the lake or river with its surprisingly good sense of smell. Once it has located suitable underwater prey, it will then suction up the food into its mouth with a strong vacuum force. Gravel is often inhaled at the same time. This will help grind up food in its stomach for easier digestion. Their actual teeth are small and vestigial (meaning they’re highly reduced and no longer serve the same purpose).

Axolotls do most of their hunting at night and then hide among aquatic vegetation and mud along the bottom to avoid being eaten during the day. Some of their most common predators include storks, herons, and large fish. The axolotl once had very few natural predators in the wild, but the introduction of new fish species (such as Asian carp and African tilapia) for aquaculture purposes, as well as poaching from humans, has contributed to their steep decline. Many of these fish feed on axolotl young and also the axolotl’s main food sources. Attempts to remove these fish from the waters could have beneficial effects on axolotl population numbers.

A Complete List of the Top 6 Foods the Axolotl Eats

The axolotl feeds upon a large variety of different underwater prey, including:

Next Up: How Do Butterflies Eat? 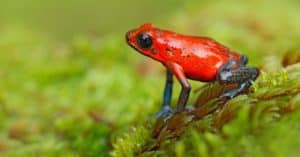 What Do Poison Dart Frogs Eat?