We often hear about extinct animals and the rare creatures on endangered lists, but did you know that plants are under threat and we have extinct flowers as well?

A study by The Royal Botanic Gardens in Kew, England suggests we’ve lost 571 plant species since 1750. It matters because flowers are part of the ecosystem. Without flowers, pollination doesn’t occur and our food sources are threatened.

The aptly named cry violet was native to France, but by the 1950s it was extinct due to over picking by enthusiastic botanists and quarrying in its native limestone habitat.

This pretty violet was named after the French town of Cry where it was first discovered in 1860. It was small, just 1.5 to 5 inches tall with pale violet flowers that bloomed in in May and June.

It liked sunny, chalky conditions and was endemic to the Cry region in near Tonnerre.  No one has spotted a cry violet there since 1927 and it’s presumed extinct.

This pretty bush was a member of the spurge family endemic to St Helena in the South Atlantic Ocean which is famous for hosting banished Napoleon in 1815. It reached 6.5 feet in height with oval toothy leaves and inflorescence flowers that resembled red string. It was sometimes called the string tree because every branch was covered in bright red flower spikes during April and May.

By the 19th century, humans had cleared the native woodlands and with that the St Helena mountain bush became extinct.

Chocolate cosmos is a Mexican daisy that’s now extinct in the wild. One clone survives in cultivation, but if people tire of its deep red-brown flowers and chocolate scent it’ll become extinct. It’s also possible that a future disease could cause its extinction.

Chocolate cosmos reaches 60 cm tall and blooms in summer. It’s a popular annual around the world because it’s easy to grow and attracts lots of pollinators.  In the wild, its habitat was cleared for urbanization and it was wiped out.

This extinct flower was endemic to Jebel Maaleh in Socotra Yemen. It was an annual plant (that means it grew, flowered, seeded, and died in one year) that grew on dry slopes.

It was only spotted once in 1880, and botanists took a specimen to study, but it was never seen again and is assumed extinct.

Romans loved silphium. It was a daisy-like flower described as a giant fennel with yellow petals and sweet sap. It was native to Cyrene which is now called Libya.

Silphium was used for food, medicine, and potentially birth control, but historians are still debating its huge popularity. Many merchants became rich selling silphium across the Mediterranean, but its popularity was its downfall. Ancient Greek philosopher Pliny the Elder wrote that the last stalk of silphium was presented to Emperor Nero in the year 50AD.

Cooksonia was an ancient plant that botanists think was one of the first plants to have a stem. It lived 425 million years ago along coastlines across the planet.

This ancient plant reached about 12 inches tall. Instead of flowers, it had short and wide terminal sporangia that housed the spores it used to spread across moist habitats.

This plant helped change Earth’s atmosphere and ecosystem so dinosaurs and mammals could flourish in an oxygen-rich environment. How exactly it photosynthesized is still a matter of scientific debate.

It’s extinct now, but we shouldn’t underestimate how important it was to the world.

The Wynberg flower is only known from a drawing. It used to flourish in Cape Town, South Africa in the 1700s, but the construction of colonial vineyards destroyed its habitat. The last Wynberg Conebush was found in 1806 in a flower collector’s garden in London.

It’s not known exactly when this daisy-like white petalled flower became extinct, but because one hasn’t been seen in over 200 years it’s presumed extinct.

Hawaii chaff flowers were numerous in the 1950s but its habitat shrank when the islands became a tourist destination, non-native plants were introduced, and the population increased. The last chaff flower was seen in 1964.

This pretty flower looked like a cornstalk with a fluffy chaff-type flower on a longish stem. It was endemic to the islands of Kure, Laysan, and Midway plus the Pearl-Hermes Atoll.

Orbexilum stipulatum was a flowering plant native to Rock Island in the Falls of Ohio, Kentucky. It lived near rapids and limestone outcrops on the Ohio river and was first observed in 1838. By all accounts, it was a pretty blue flowering plant but when a local dam was built, its native habitat was submerged.

Searches were carried out in likely locations in 1998 along the gravel bars and riverbank bedrock in Kentucky and Indiana but there was no trace. Since no one has seen Falls-of-the-Ohio Scurfpea since 1881, it’s believed extinct.

This flowering hibiscus was native to Maui, Hawaii. It grew in the lava fields and on volcanic slopes with pretty yellow flowers. Recent research in 2019 resurrected its potential scent, but due to habitat devastation by cattle ranchers in the late 1800s the last tree was found dead in 1912.

A dried specimen is kept by Harvard University.

What Are Some Endangered Flowers?

Also known as the corpse flower due to its rotting scent, this large flowering plant only grows in southeastern Asia. Logging and farmland clearance threaten its existence.

A beautiful deep purple flower with 12-inch petals, this is a native to Yunnan Province of China where it grows in tropical forests. Habitat disruption is the reason why it’s endangered.

These tropical flowers are pollinated by bats! They have pale green petals with purple buds and are native to Hawaii and the Philippines. The green jade flower is endangered due to deforestation.

The majority of extinct flowers on this list, and the endangered ones too, have been badly affected by human activity such as over picking and environmental destruction. It’s a worrisome trend because our planet is a poorer place without an array of pollinating flowers. 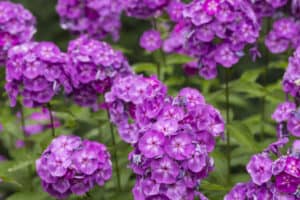 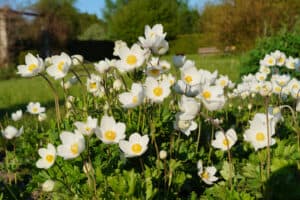 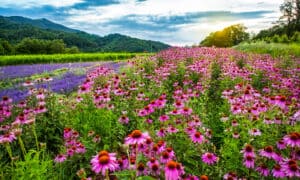 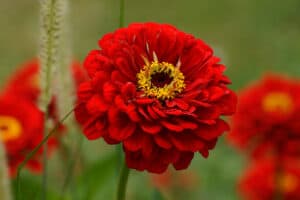