iStock.com/moose henderson
Share this post on:
More Great Content:
Why Do Foxes Scream At Night?
What Do Red Foxes Eat? 7 Types…
What’s a Baby Fox Called & 4…
What Do Foxes Eat?
Fox Lifespan: How Long Do Foxes Live?
Do Foxes Eat Cats?

There are twelve distinct kinds of foxes, and they can be found everywhere in the world! This unique animal is unique, but is it really one of a kind? Foxes look like dogs, act like cats, and have unique characteristics all their own. But are foxes dogs, cats, or something else entirely?

Are Foxes Canines or Felines?

Foxes are a part of the Canidae family of animals, which makes them canines. They are closely related to domestic dogs and wolves. The canine family also includes coyotes, jackals, and even raccoons!

Canines, also called canids, are characterized by their slender build, long legs, bushy tails, and long muzzles. Foxes have all of these canine features. And of course, the most distinguishing feature of the canid family is the teeth that share the same name!

What Else Makes A Fox A Canine Instead of A Feline?

The key feature that identifies a member of the canine family would be the teeth for which they are named. Canine teeth are specifically suited to grabbing onto and holding prey, cracking bone, and shredding flesh. Like wolves, foxes are true canines, and they have the toothy smile to prove it!

The canine family is carnivorous, but a lot of canine species are omnivores. Foxes are remarkably like dogs in that they prefer meat but can eat a wide variety of food.

Like raccoons, foxes are opportunists and will eat carrion or scavenge for food in human trash. The saying about foxes in the henhouse is true, they also love eggs and dairy!

Why Are Foxes Compared To Cats?

It is not surprising that many individuals compare foxes to house cats, though. They share the same preference for smaller mammals, such as mice, voles, rats, and gophers. They also prey on small birds and squirrels. Like cats, foxes also rely on their finely honed senses to detect prey and can hear a mouse squeak from over one hundred yards away! They also have a 260-degree field of vision that relies on movement detection, a trait they share with felines.

. However, even the bravest housecat would think twice about going for raccoons, porcupines, or snakes! Larger species of foxes, like the Red fox, have no problems hunting larger animals like raccoons. If you want to learn more about how foxes hunt and what foods they like best, check out our article What Do Foxes Eat?

Like cats, foxes also have vertically slitted pupils and sensitive whiskers that help them navigate in the dark. Foxes are also the only member of the Canine family that walks on the balls of their feet. Two species also have partially retractable claws. This means they are the only canines that can climb trees!

So, if you got the wrong idea about whether foxes were canines or felines, you were not too far off the mark. But foxes are more unique than you think!

How Are Foxes Different From Other Canines?

Now that we’ve answered the question, are foxes canines or felines, how are they different from wolves, coyotes, or wild dogs?

The main difference between a wolf or dog and foxes is the animal’s size. The red fox is the largest species of Vulpes vulpes, which is the scientific name for foxes. Red foxes are 1.3 ft high at the shoulder and weigh thirty-one pounds on average. This makes them the same height and weight as a medium or small dog. Wolves are six times their size, and the smallest wild dog or coyote is still twice their size.

While red wolves share a similar coloration to the Red foxes’ signature color, the red wolf is noticeably bigger and is more likely to be mistaken for a coyote than a fox. The red wolf weighs up to ninety pounds and stands a bit taller and is more reddish-brown than the true red of the red fox that shares a habitat.

Wolves and dogs also generally form packs, whereas foxes may share a den with one male, up to two females, and their offspring. Wolves and dogs are distinctly social and live and hunt as a group. Foxes are solitary and hunt alone, and only interact to raise young.

Wolves and coyotes are primarily carnivorous and rarely consume anything but meat. Foxes, like raccoons and domestic dogs, are true omnivores that also enjoy fruits, eggs, and berries. Unlike other wild canines, foxes will approach human dwellings. Wolves are particularly wary of coming anywhere close to humans, but foxes are not wary of us and will approach even urban areas.

Finally, foxes have very distinct vocalizations. Foxes communicate with higher-pitched yips and barks than wolves, coyotes, or domestic dogs. Foxes also produce a loud and shrill scream during mating season. These eerie noises have been compared to a human woman screaming or a baby crying!

For a more in-depth look at how foxes are different from their larger cousin the wolf, check out our article, Fox VS Wolf: The Top 4 Differences Of The Red And Grey Canids Of The Northern Hemisphere!

There Are 12 Different Kinds Of Foxes!

There are twelve distinct species of fox, and they are all unique! Foxes are found in every corner of the globe, though they are not native to Australia. The Red fox was introduced to the continent by humans in the 19th century. Sadly, their introduction was proven to be detrimental to the extinction or endangerment of many Australian species of birds and mammals.

The twelve species of foxes and the locations of their natural habitats are:

Fennec Fox: The Saharan and the Arabian Desert, Sinai Peninsula

Each species has its own incredibly unique characteristics and skills for surviving in its habitat. To learn more about each species, you can check out all our available articles using the search bar!

But before we go, a little bit more on the fox species with the largest numbers and habitat, the red fox!

The Fox Is A Sly One!

Foxes are canines, no doubt about it! However, they do have some fairly feline attributes that no other canine has. Luckily for us, they also have their own unique qualities that set them apart as well!

Foxes have been the inspiration for myths and legends and are revered for their intelligence and cunning nature. They have inspired everything from fairy tales to cartoons and even have their viral song. What does the fox say? Thank you for learning more about these fascinating canines! 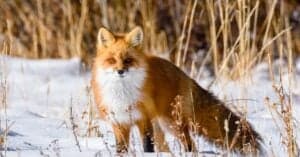