Click through all of our Gray Fox images in the gallery. 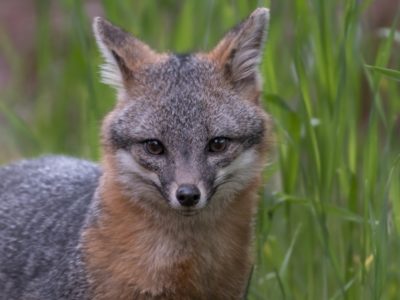 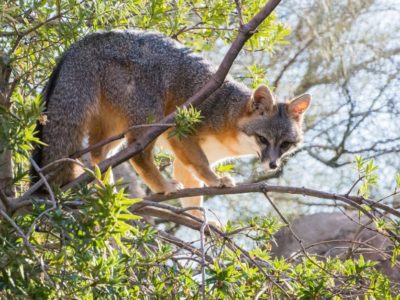 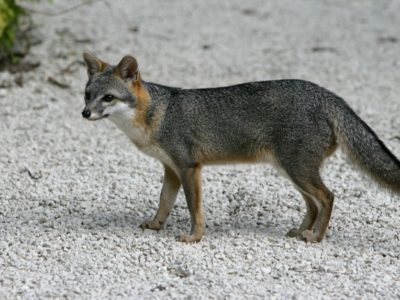 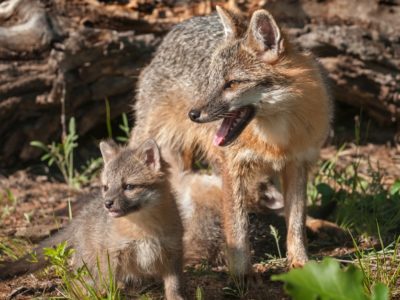 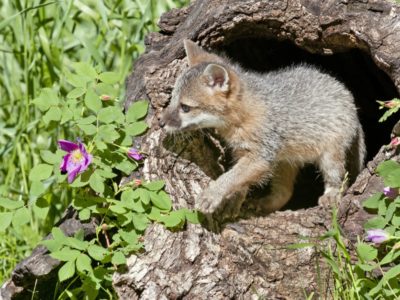 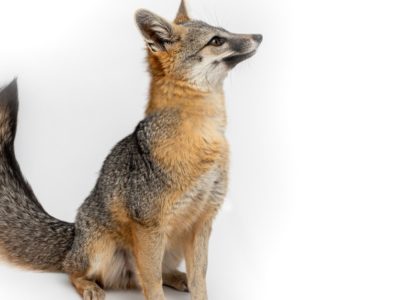 View all of the Gray Fox images!

The gray fox is a small, shy member of the canine family that likes to hide in shrubs and trees.

This species may not be as well-known as its red-colored cousin, but it’s one of the most common species of foxes in North America. These animals are not usually seen by people because of their nocturnal behavior and furtive nature, but they have many amazing adaptations to cope with their environment. Habitat loss in some areas may be forcing them into closer proximity with people.

The scientific name of the gray fox is Urocyon cinereoargenteus. The genus name Urocyon (pronounced your-oh-psy-on) is the combination of two Greek words that roughly translate into “tailed dog.” the scientific name of cinereoargenteus (pronounced roughly si-neh-ree-oh-ar-gen-tay-us) is a combination of two Latin words: cinereus, meaning “ash-colored,” and argenteus, meaning “silvery.”

The closest living relative of this species is the island fox, which lives among the Channel Islands off the Californian coast. The red fox, fennec fox, and all other types of foxes belong to an entirely separate genus known as Vulpes. Together, they form the family of Canidae with wolves, dogs, and coyotes.

The gray fox has many familiar fox-like characteristics such as a long body, a very bushy tail, and large, erect ears. But compared with the well-known red fox, the gray fox can be distinguished by the relatively short legs, a more cat-like snout, partially retractable claws, and wider ridges on the skull. The most distinguishing feature of this species, as the name suggests, is the coat of silvery gray fur. This is mixed in with red around the chest and side, white on the face and legs, and a black stripe down the tail.

Weighing between 7 and 14 pounds, the gray fox is about the same size as a small domesticated dog like the beagle or the bulldog. The body typically measures about 2 feet long, while the tail adds another 10 inches or so. Male foxes are slightly larger than females, but otherwise, they are physically the same except for the obvious sexual differences.

The gray fox is a solitary species. Except when they congregate together for the breeding season and then form family units to raise and take care of the offspring, the gray fox does not normally tolerate other members of the same species. It maintains and defends a home range up to a few square miles in size.

In order to communicate, the gray fox relies heavily on its extraordinary sense of smell to identify marked territory, find good mates, and recognize other members of the species. Their scent gland near the anus is the largest of any canine species in North America. Vocalizations are normally limited to loud barking, yapping, growling, or screaming sounds. Many of these sounds serve as warnings or mating calls. Posture is another important part of the fox’s ability to convey social relations (like dominance and submission) and mood. Finally, mutual grooming is performed in some social contexts to reinforce bonds and relationships.

The gray fox almost always sleeps during the day and leaves the den at night to hunt; only rarely does it ever hunt during the day as well. It will take up residence in hollow logs or trees, rocky crevices, and underground burrows near a body of water. It will prefer to use the same site year after year unless otherwise forced to leave by circumstances. Unlike most other canines, the gray fox has the amazing ability to climb trees by leaping into the branches or ascending the trunks. Its sharp, partially retractable claws can dig directly into the wood to support its entire weight. These adaptations help it survive in the woods.

The gray fox will inhabit just about any environment with heavy tree, rock, or brush cover. Although it prefers lower elevations, this species can be found in some hilly and mountainous areas like the Adirondack beyond 3,000 feet above sea level. Its natural territory stretches from Canada in the north to Venezuela and Colombia in the south. The United States (excluding the mountainous northwest) and Mexico are its main homes. They almost always prefer to live along banks of streams or rivers.

A seasoned survivor, the gray fox only has a few natural predators and threats in the wild. It has historically been hunted by humans both for sport and for the quality of its pelt, but because the coat is short and coarse, it’s generally less desirable than the softer fur of the red fox. Another potential threat is that the loss of habitat in some areas may reduce the amount of tree or brush cover that provides the fox with protection. Fortunately, forest cover in the United States is generally stable or even increasing, but local deforestation may disrupt the habit of some gray fox subspecies.

What eats the gray fox?

The gray fox is primarily preyed upon by bobcats, coyotes, golden eagles, and great-horned owls. They escape predators by hiding undercover or even climbing trees.

What does the gray fox eat?

One of the more interesting facts that many people may not know is that the gray fox is an omnivorous species. Rabbits, mice, rats, birds, and insects (like grasshoppers and butterflies) form the most substantial part of their diet; they are less likely to raid chicken coops like the red fox cousin. As the weather warms up, they rely even more on fruits like berries and apples with a mixture of some nuts and grains. If nothing else is available, then they have no compunction against eating dead carrion left behind by other predators. The gray fox plays an important role in the local ecosystem by controlling rodent populations.

The annual mating season for the gray fox usually begins in September and October. When it attempts to find a mate, the male will become much more aggressive and compete with others for the affection of the females. The evidence strongly suggests that this species forms monogamous pair bonds for the length of the breeding season and perhaps even for multiple breeding seasons. In rare cases, gray foxes are not monogamous at all. They will have multiple partners in the mating season, but it’s not clear what triggers this.

Once they’ve paired up, breeding always takes place between the months of December and March, depending on the location and the quality of the habitat. Males will perform most of the hunting, while the female will search for a den and prepare for birth. After about two months of pregnancy, she will produce a litter of up to seven kits at a time. Covered in luxurious black fur, the newborn kits are completely blind and helpless and weigh only about 86 grams. The mother will feed the kits with her milk until they are about two to six weeks old.

In the ensuing months, the kits will learn valuable hunting and survival skills like stalking and pouncing from the father, but they will continue to rely on their parents for defense until they are about 10 months, after which they will become truly independent and sexually mature. The gray fox has a relatively short lifespan of six to eight years. The oldest known member of the species lived 12 years in captivity.

The gray fox is currently classified as a species of least concern by the IUCN Red List. Population estimates are not available, but the facts suggest that the current numbers are stable. No particular conversation efforts are currently needed for this species.

View all 64 animals that start with G

The gray fox is omnivorous. It consumes a lot of meat in the winter and more fruit during the summer.

Gray foxes are some of the most common foxes in all of North America. They may escape the notice of most people because they like to hide in dense forests and brush.

Are gray foxes dangerous to humans?

Unless handled directly, the gray fox is far too small to pose any danger to humans. If they encounter people, then they will almost certainly attempt to run away and hide.

Where do gray foxes live?

The gray fox is native to North America and small parts of Venezuela and Colombia. It can be found in dens, holes, or crevices almost anywhere with adequate tree or shrub cover.

What does a gray fox eat?

The gray fox primarily feeds on rodents, birds, and insects during the winter. It will add more fruit to its diet during the summer.

The gray fox has a similar appearance as its cousin, the red fox, except for the smaller body, the shorter snout, a more cat-like skull with wider skull ridges, the retractable claws, and the gray coat of fur.