Common carp can live up to 20 years in the right environment. They love feeding on aquatic vegetation like phytoplankton. However, lately, there’s been intense competition for food their food source from invasive Asian carp species.

Conservation efforts are underway to distinguish each species, hoping to clear out the invasive ones. This guide will break down the key differences so you too, can tell these fish apart.

Read on to learn all about Asian carp vs common carp.

They Key Differences Between Common Carp and Asian Carp

There are four species of Asian carp and only one species of common carp. All of these fish belong to the Cyprinidae family.

Common carp are generally friendly to the environment, but Asian carp are causing issues with native species. You can tell the fish apart by looking at their eyes and mouths. Asian carp have lower-set eyes, and common carp have barbells by their mouth (similar to catfish).

Neither fish will attack humans, but they have a reputation for jumping out of the water. An excess of Asian carp in the waterways is causing problems for boaters and water skiers.

Finally, both fish are safe to eat, but have slightly different flavors. Keep reading to dive deeper into the differences between Asian carp vs common carp.

When you hear the term Asian carp, it’s misleading. It’s not one fish; it’s a name for four. The term is applied to a group of four related fish species, including the grass, silver, big head, and black carp. All these fish species are related to the common carp, goldfish, and koi.

The scientific name for common carp is Cyprinus carpio. They also fall in the genus of the Cyprinidae family. Most of the carp species in this genus have an East Asia origin.

One Asian carp species, silver carp, has a large-scale head. They’re entirely toothless, and they don’t have any barbells. You’ll notice their eyes lie right below the center line of their body.

Asian carp also have unique gills. They use these special gilbreakers to filter phytoplankton. The gill rakers are long, thin, porous body parts that help filter the microscopic plants the fish feeds on.

Closely related to the big head carp, the silver carp has a slender body. They’re grayish-black on the top, and silver shaded on their sides. They also have a silver underbelly and tiny curved scales.

None of the Asian carp species have barbells, but common carp do. The barbells are whisker-like appendages near the corner of the fish’s mouth.

Common carp also have a silver to olive green color, but brass and gray colors are on their back and sides. You’ll also find that common carp have orange-red fins, whereas silver carp have beige-tan fins.

Asian carp are an invasive fish species in North America. These carp came from China and were imported into the United States as early as the 1970s. The idea was that importing the Asian carps would help control algal blooms in wastewater treatment zones.

However, within 10 years of being introduced to the treatment plants and aquaculture ponds, the Asian carp escaped. Entering the Mississippi River basin and other large rivers like the Illinois and Missouri, now Asian carp are a significant problem.

Asian carp are directly competing with native species for habitat and food as an invasive species. Fishermen in Arkansaw were able to catch 166 of the invasive species, but there are still more out there. Since their population is producing at a rapid rate, they’re disrupting the food web and ecology of large rivers throughout the Midwest.

Alternatively, common carp are not an invasive fish species. Common carp come from Eurasia but arrived in North America much earlier than the invasive Asian carp. Common carp came to North America from non-native populations in Europe during the 1800s. Now they’re widely distributed throughout all of eastern North America. They don’t negatively impact native species.

Asian carp aren’t an aggressive fish species. You don’t have to worry about them attacking you if in the water.

Silver carp, a variety of Asian carp, can weigh over 20 lb. They swim in large schools and are prone to jumping. Unfortunately, jumping schools of silver carp have injured a lot of boaters and damaged many boats. Water skiing along the Missouri River has become incredibly dangerous because many carp jump behind the boat.

Common carp are also docile fish. However, anglers must be careful when retrieving hooks stuck far down the fish’s throat. Common carp have teeth deep within their throat. They’re called pharyngeal teeth since they sit so deep within the throat.

You can eat Asian carp, and it tastes great! All the different types of Asian carp have white, mild flesh. They have an intramuscular bone structure throughout the fillet that some people find unpleasing.

Since Asian carp feed low on the food web, they can grow fast without consuming much fat. Asian carp usually aren’t bottom feeders either. The fish’s entire lifestyle helps it be low in contaminants.

Common carp can also make a great meal, as long as it’s properly prepared. The fish is full of protein, vitamin b12, and potassium. Other fish that are good to eat include mahi-mahi, perch, and rainbow trout. 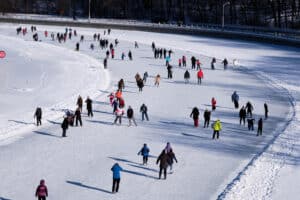