The grass carp is considered to be a natural weed control agent. 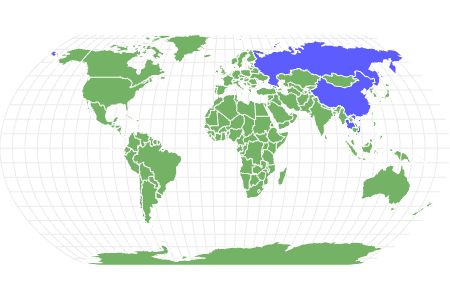 View all of our Grass Carp pictures in the gallery.

View all of the Grass Carp images!

First originating from eastern Asia, the grass carp has since been introduced to many different countries for the purpose of maintaining clear waters.

The grass carp is used as a form of plant or weed controller in ponds or lakes around the world. Only sterile fish are allowed for legal use in many states to prevent them from spreading beyond their intended boundaries. However, non-sterile specimens do escape into the water and cause large-scale changes to the local ecosystem.

The scientific name of the grass carp is Ctenopharyngodon idella. Ctenopharyngodon, although difficult to pronounce, basically translates from Greek to mean “comb-like throat teeth.” Idella essentially means “distinct.” This species is the only currently living member of its genus. It belongs to the carp or minnow family.

The grass carp is characterized by a torpedo-shaped body, normally measuring about 2 to 4 feet in size, with about 40 large scales on each side, a forked tail, and sharp teeth. The dark olive or silver body color gradually progresses to white or yellow around the sides and stomach. The largest ever recorded specimen reached more than 6 feet long and weighed more than 100 pounds.

The grass carp was originally native to lakes, ponds, and large rivers with shallow slow-moving, or standing water throughout eastern Asia, from the northern border of Vietnam to Siberia. Because of their ability to control aquatic vegetation, they have been introduced into numerous locations around the world, including 35 American states. The IUCN Red list does not currently give them a population status, but they have spread quickly and widely due to their voracious appetite. Population numbers have not been estimated properly.

The grass carp is an important part of the ecosystem in its native habitat. Whenever it’s introduced into new locations, however, the grass carp alters the environment by reducing the amount of aquatic vegetation. It also outcompetes local fish for food wherever it is found.

What eats the grass carp?

The grass carp is consumed by birds, snakes, and larger fish. Eggs and juveniles are much more likely to be consumed than adults. They have few good defenses against predators other than their speed and agility in the water.

What does the grass carp eat?

The diet of the grass carp mostly consists of vegetation and grass, including both leaves and stems. Juveniles tend to eat invertebrates, aquatic insects, and other small bits of organic matter. It is estimated that they can consume anywhere between 40% and up to three times their own body weight in food every single day. The comb-like teeth in the throat enable them to grind up the vegetation for easier digestion. A very long digestive tract helps them absorb nutrients from the plants.

The spawning season of the grass carp normally takes place in the spring when the water temperature rises to more than 60 degrees Fahrenheit. As fairly promiscuous fish, both males and females can mate with multiple partners throughout the entire spawning season. A single female can easily produce some 500,000 eggs at a time with the number rising as she grows older. She will release these eggs into the water, and the male will then release his sperm to fertilize them. After being fertilized, the eggs are incubated for two to three days. Most of the eggs are soon lost to predation, disease, or even suffocation.

The newly hatched juveniles that survive this initial period will move from the fast-moving waters in which they were born to nearby lakes and nurseries. The juveniles grow very rapidly and switch to an herbivorous diet when they reach around 2 to 3 inches long. They usually achieve sexual maturity within the first year and soon begin reproducing. The typical lifespan is thought to be about five to nine years long, but some grass carp have lived up to 20 years.

Grass Carp in Fishing and Cooking

The grass carp was originally cultivated in China for food, but the white, tender meat can be enjoyed by anyone around the world for an affordable price. It is said to be especially delicious when steamed or fried. Keep in mind that the spines are very difficult to remove before cooking and must be eaten around. They are considered to be strong fighters when caught with a rod and reel. A 7-foot rod with a 200-yard line is definitely recommended, and you can find one for an affordable price. The bait should ideally be some kind of vegetation such as sweet corn or cherry tomatoes. Earthworms also sometimes work well as bait.

Where are grass carp found?

The grass carp originated from eastern Asia. They have since been introduced all over the world, including many American states.

Where do grass carp live?

They live in lakes, rivers, and ponds with slow-moving or standing water.

Are grass carp good to eat?

Their white tender meat is said to be healthy and delicious with none of the fishy taste one would expect.

Will grass carp clean my pond?

They will consume most of the aquatic vegetation from a pond.

Why are grass carps considered invasive?

They consume up to three times their body weight and alter the composition of their habitat by removing much of the excess aquatic vegetation.

Yes, they have invaded many waterways outside of their normal range. In most cases, humans were responsible for transplanting them into their new environments. This was usually a deliberate effort to control the amount of aquatic vegetation in the water.

How do you catch a grass carp?

Due to their size, fishers will probably need a 7-foot rod with a 200-yard line. The best methods to catch them are usually chumming (throwing bait into the water and waiting for them to congregate) or sight fishing. The best locations to find them are near flooded grass around the top line of the water. Provided you have the equipment, anyone can enjoy catching the grass carp for a decent price.