Bearded dragons originally come from arid, scrubby regions of Australia, where there’s plenty of heat and light to go around. In the past decades, they’ve become a popular exotic pet in the West. There are actually six species of bearded dragon. The central bearded dragon is the most common species to be kept as a pet. Bearded dragons are so named because they have a mane-like fringe of spiky skin around their necks. When they’re threatened–they puff up this skin and open their mouths to display their (almost) impressive teeth.

Here, we’ll learn more about what makes bearded dragon teeth unique, what they’re made of, and how they’re different from the teeth of other lizards. Then, we’ll go over the proper care of your pet bearded dragon’s teeth, and how to prevent dental problems. Then, we’ll take a quick look at just how hard these lizards can bite, and whether or not you should be worried.

Do Bearded Dragons Have Teeth?

They may be hard to see, but bearded dragons do in fact have teeth. They’re small, relative to their body size, and unless the bearded dragon looks right at you with its mouth open, you probably won’t see them.

Bearded dragons can have up to 80 teeth that run all the way around their jaws in a ‘U’ shape (like the human mouth). They’ve got two different types of tooth; one type on the upper jaw, and another type on the lower jaw. Each tooth is made up of a hard enamel coating, followed by a body made of dentin. The core of the tooth is a soft, nerve and blood vessel filled pulp. The pulp keeps the tooth alive and supplied with blood and nutrients.

Bearded dragons have around 30-40 teeth in their upper jaws. They’re small, so small that they’re difficult to see. They’re flattened from front to back like a wide blade, with a single, triangular cusp.

Unlike human teeth, which have a root and a socket, bearded dragons’ upper teeth have no true root, and no socket. Instead, they’re affixed to the top of the jaw bone, as if they had been glued there. This type of tooth is known as acrodont, and it’s common to lizards. The teeth function well, but there is one downside; they don’t regrow once the lizard is fully grown.

This means that, if an adult bearded dragon breaks or loses an upper tooth in the course of its life, it loses it forever.

The bearded dragon’s lower jaw can have up to 40 teeth. The older, and larger, the lizard–the more teeth they have.

The bottom teeth aren’t quite the same as the top teeth. They’re larger, and rather than resting on top of the jaw bone, they’re actually semi-socketed into the inside edge of the bone. They still don’t have true roots, but they extend just far enough into the bone that, if the bearded dragon breaks or loses one, it can regrow it.

These types of teeth are known as pleurodont, and they’re only found on the bottom jaw. In conjunction with the upper teeth, they’re used to grip and manipulate prey once it’s in the bearded dragon’s mouth.

Bearded dragons lunge at prey, pulling them into their mouths with their tongues and sometimes their front legs. Their teeth do much of the work of crunching up the creature (usually an insect, but sometimes a small rodent) before swallowing.

Should You Brush Your Bearded Dragon’s Teeth?

Bearded dragons make popular pets for reptile enthusiasts. They can live for over a decade, and grow up to two feet long. They develop close relationships with their owners, and revel in catching and eating the insects fed to them.

Because bearded dragons come from a very hot, dry place, it’s important that their owners replicate natural conditions as much as possible in their enclosures. Bearded dragons are prone to periodontal disease, like rotten or broken teeth, and need both the right foods, and the right conditions, to keep their teeth pearly white.

Even if you feed your bearded dragon the ideal diet, they will still build up plaque on their teeth. This plaque can quickly build up and cause gum disease which will eventually damage the teeth. To prevent this build up, owners can brush their bearded dragons’ teeth with a cotton swab and vet provided, specially formulated toothpaste.

The final element to keeping your pet bearded dragon’s teeth healthy is their environment, and the vitamins they receive. First, bearded dragons require a lot of heat and light–they are after all, ectothermic lizards. Then, they need vitamin supplements like multivitamins, Vitamin D, and Calcium. 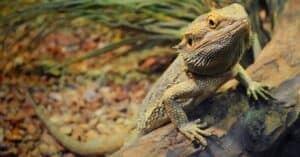 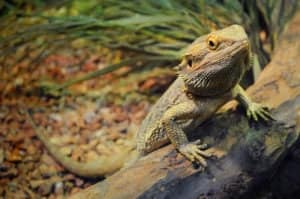 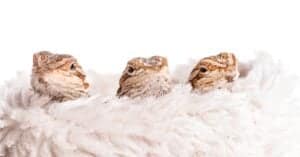