iStock.com/GatorDawg
Share this post on:
More Great Content:
Coyote Scat: How to Tell if a…
Coyote Howling: Why Do Coyotes Make Sounds…
What do Coyotes Eat?
Coyote vs Wolf: The 6 Key Differences…
Pet Coyotes: Do Not Try This! Here's…
Coyote with Mange: What Does it Mean?

Coyotes are far from extinct as they are grossly abundant in the Southern region spanning through Mexico and dashing into Central America. They are intelligent as they have been able to adopt the lifesaving adaptation technique for themselves. Coyotes are versatile and can quench their hunger by taking a piece or more from a wide range of available food. They eat lizards, mice, insects, and garbage as they find them very nourishing.

Coyotes may be fierce predators with high running capacity, but that doesn’t make them immune to being on the menu for other predators. What eats coyotes?

Predominantly categorized as carnivores, coyotes are omnivores – they tend to eat both plants and animals. With about 90% of its meal consisting majorly of meat, the coyote hunts and preys on defenseless and weaker animals like the deer, moose, pigeons, mull, snakes, fish, young water birds, and crustaceans. For centuries, coyotes have been able to adapt and increase their habitat across various environments, even more boldly, areas inhabited by humans. Interestingly, they prey on amphibians except for toads because of their foul skin secretion, which wards off predators. A pretty fascinating fact is that coyotes kill rattlesnakes to serve as food and protect against vicious attacks on their pups. They first deceitfully tease the snake, which then stretches out, allowing the coyotes an excellent angle to clap their jaws against the head of the snake and finally take it out.

Gray wolves, cougars, American black and grizzly bears, American alligators, large Canada lynx, and golden eagles eat coyotes. Regardless of its fierce hunting skills, the coyote sure knows its boundaries regarding the food chain. Though they appear staunch when dealing with their prey, they are also vulnerable when they contact predators like wolves and cougars, as listed above.

Cougars are wild and large cats belonging to the subfamily Felinae. They are renowned as ambush predators, feasting on various prey, with our guest, the coyote, being one of its favorites. Cougars have zero tolerance for coyotes but can yield a kill to a pressurizing pack of coyotes – this deprives them of the title of an apex predator. They are very good at stalking their prey, which makes them prefer habitats with dense underbrush or hilly areas. Other times, the cougar can easily ambush and eat a coyote.

Grizzlies are predominantly found in North America; they belong to the order Carnivora, making them have a digestive system like other carnivores. Grizzlies, just like coyotes, are omnivores, and they also eat coyotes. Other mammals that fall prey to the grizzly bear include the moose, elk, and the bison, to mention a few.

The Canada lynx is often referred to as a specialist predator whose presence in a particular settlement or range is dependent on the availability of prey. It is very stealthy in its ambush, as it can easily take on an unsuspecting coyote. The Canada lynx eats coyotes, and it is also very fond of the hare. They are sparsely domiciled across Alaska, Canada, and some Northern areas of the United States.

Canada lynx can be categorized by its long, triangular-shaped ears with black tufts likened to a hoisted flag. This predator hunts mainly at night and can kill its prey with a bite to the head or neck.

Coyotes are at higher risk when they move alone; they move individually outside their pack. In a kill site, they can easily be dominated by wolves, grizzly bears, cougars, or other deadly predators when they don’t work cooperatively as a pack to make a steal. Otherwise, they would have to wait for the top predators to satisfy their stomachs, after which they can make use of the leftovers.

Other Facts about Coyotes

First off, coyotes are clever sets of mammals. They have good vision and a high detective sense of smell. Coyotes can run up to 40 miles per hour. It is proven that they are more effective when they hunt in packs, thereby reducing coyote casualties and increasing productivity.

During spring, female coyotes give birth to litters of three to nineteen pups – this increases their population and improves the strength of their hunting pack. Coyotes are very particular about their young ones; they would kill rattlesnakes for the dual purpose of food and security of their pups. If they survive, the pups will be ready for hunting by the following fall. 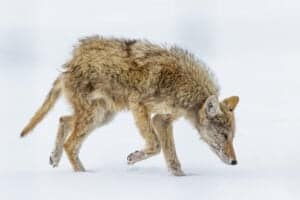 Coyote with Mange: What Does it Mean?