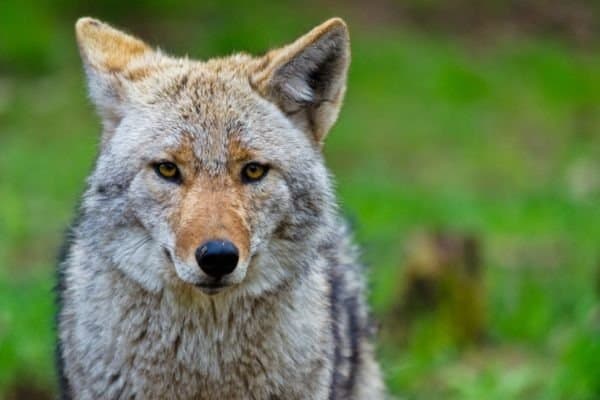 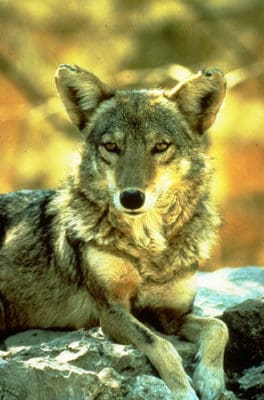 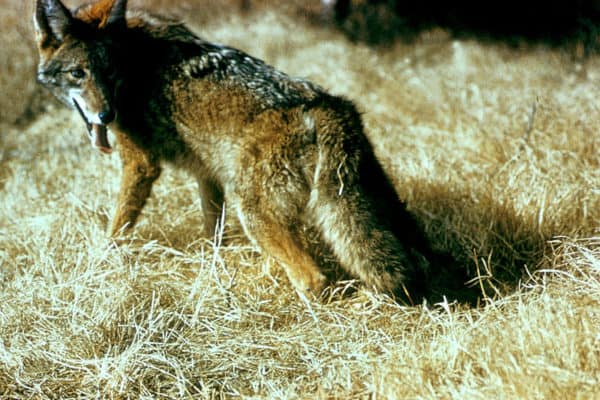 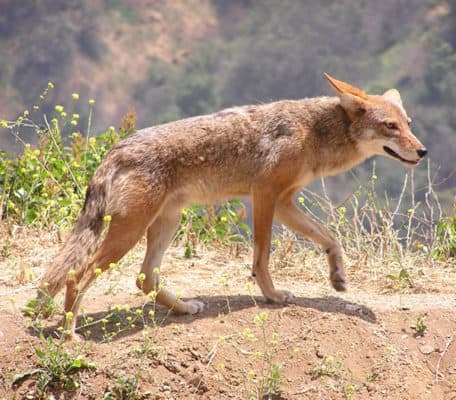 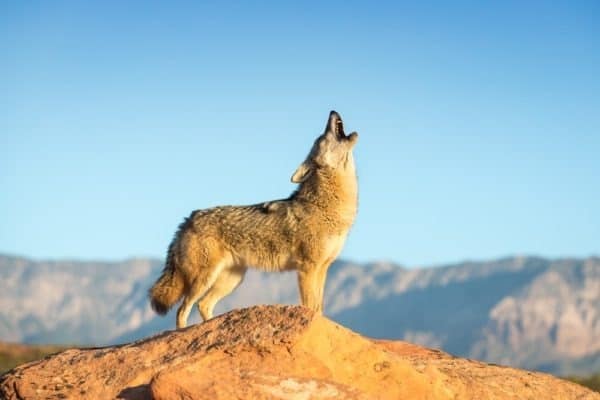 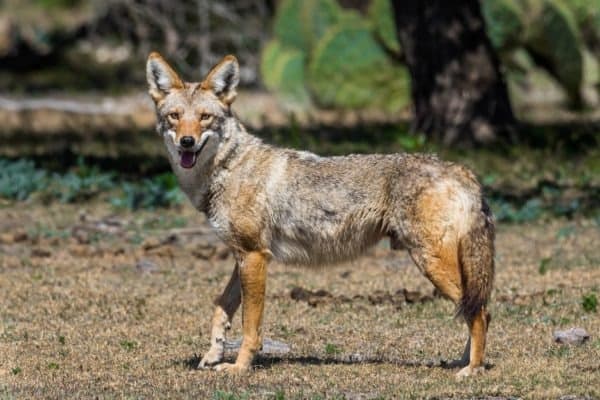 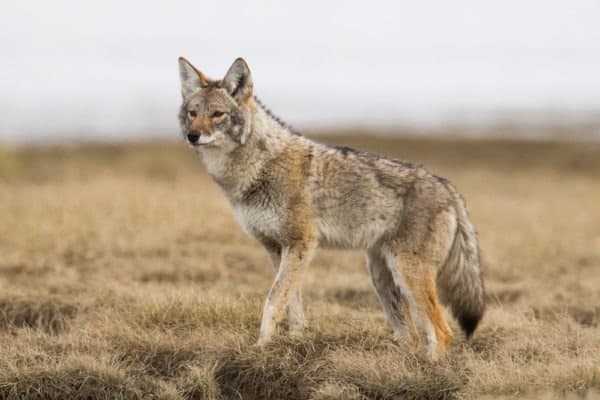 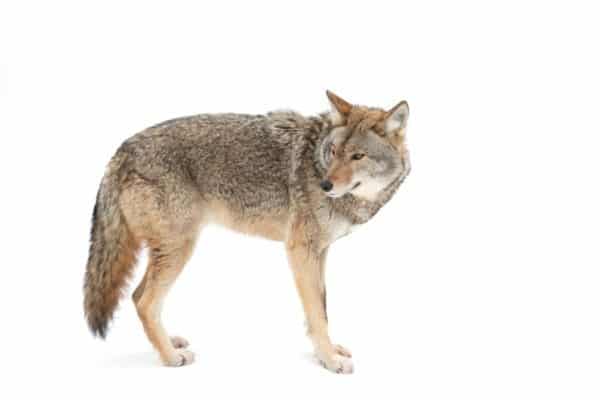 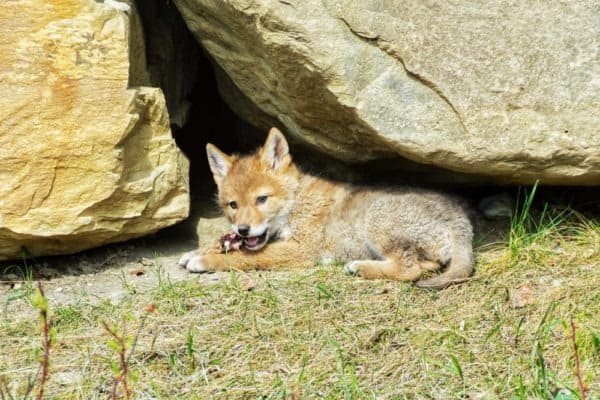 Coyotes have traditionally served many different roles in human culture simultaneously as a pest and a mystical creature with various magical attributes. Their melancholic howls at night have seized the human imagination for many thousands of years. Although still hunted in large numbers, this nocturnal species has adapted to modern human societies and thrived as never before.

The scientific name of the coyote is Canis latrans. The rough Latin translation of this term is barker or barking dog. The actual name coyote was adapted by the Spanish from the Nahuatl word (the language of the Aztecs) for the animal in Mesoamerica.

There are 19 recognized types, all varying by the geographic range and physical appearance. These types include the plains -, Mexican -, Honduras -, northern -, California Valley coyote and many more. The coyote belongs to the same genus as the wolves, dogs, dingos, and jackals. More distantly, it is part of the same family, Canidae, as the foxes and raccoon dogs.

The coyote has a lean, wolf-like appearance with yellow eyes, a floppy tail, and very large ears in relation to body size. The luxurious coat consists of soft under fur and longer, tougher outer hairs. This fur has an unusual mixture of color: gray, brown, and almost yellow on the upper parts of the body, white around the stomach and throat, and red-brown around the muzzle and feet. The exact color of the fur may vary based on the geographical range of the subspecies in question. These animals shed around once a year in the summer, replacing its fur with an entirely new coat.

The typical coyote measures up to 37 inches long from the head to the rear end, plus another 16 inches along the tail. The entire body weighs up to 50 pounds, although females are slightly smaller on average than males. The coyote is about the same size as a medium dog like the bearded collie.

One interesting fact about their behavior is a highly fluid social arrangement. Although large packs are not usually the norm, this species does seek out comfort and cooperation in pairs or family units with established dominance hierarchies. This very plastic and changeable social behavior means that the coyote is comfortable hunting alone or with the pack. If it hunts with the pack, then they may target larger animals that require teamwork to bring down.

In order to communicate, the coyote has a truly massive repertoire of sounds, body language, and scent signals. It is believed to be one of the most vocal mammals in all of North America. These vocalizations serve as a way to signal alarm, convey a greeting, or announce the animal’s presence to other members of the pack. These animals sounds much like a dog or wolf with an array of different barks, howls, and growls.

Coyotes demonstrate aggression with an arched back and a threatening growl. This show of strength is particularly important when fighting with other members for dominance within the pack. On the other hand, a low body posture and yelping sounds can also signal submission to a more dominant member.

Scent is another important aspect of their communication. The species has a specialized gland located right around the tail as a signaling device to other members. The coyote will also mark its territories on rocks, bushes, or other objects.

The coyotes is a highly intelligent and resourceful animal. Unlike dogs, they probably lack the ability to follow human commands. But their cleverness has been a much remarked upon feature for many centuries, and modern studies suggest that coyotes are capable of planning out hunting strategies in advance.

Because of their long claws, they are very good diggers, and yet they prefer to find abandoned dens, usually created by badgers, woodchucks, or other animals, and then enlarge it. These burrows provide homes and a natural base for their hunting range for years at a time. Coyotes are nocturnal hunters that sleep during the day and come out at night. Their most active hours are the late evening and early morning.

The main difference between these species is their size. The coyote is much smaller than a wolf, which can easily measure 4 to 6 feet and weigh well over 100 pounds, depending on the sex. The coyote is also less likely to form large packs. However, they generally exhibit the same degree of intelligence. Sometimes you can tell the difference just through vocalizations. The coyotes will make a frequently yipping sound for which they’re well-known.

Based on fossil evidence, the evolution of coyotes probably occurred within the last million years or so. By comparison, the evolution of modern humans occurred sometime around 150,000 to 200,000 years ago. It is believed that modern coyotes appeared sometime after the latest extinction of large animals during the ice age. Forced to compete with wolves, they may have adapted by becoming smaller in size.

Because of their genetic similarities, coyotes are capable of producing viable hybridizations with wolves and even domesticated dogs. These hybrids, sometimes called a coywolf or coydog, are relatively rare in the wild because of the few opportunities to mate with other species. Some of the reasons for this rare hybridization may include differences in geographical range, different breeding seasons, and hostility between species in the wild.

The coyote has an extensive range across most of North America, from as far south as Panama to as far north as Canada and Alaska, though it occurs in greatest density across the Great Plains. This highly adaptable animal has evolved to live in mountains, swamps, forests, plains, deserts, and even tropical rainforests. As coyotes become even more common, they have learned to live alongside humans in urban and suburban settings. The range sometimes overlaps with wolves, but as wolf populations have fallen, these animals have benefited by taking over these ranges.

Many people don’t know that the coyote is an omnivorous species. The vast majority of this animal’s diet consists of small mammals such as rabbits, squirrels, and mice, plus sometimes large mammals such as deer. The rest of the diet consists of birds, snakes, insects, and even sometimes fruits and vegetables. These animals play an important ecological role by keeping these abundant animal populations in check. However, this can be problematic to local wildlife diversity if coyotes hunt down threatened species.

Coyotes prefer to hunt live animals, sometimes relying on the teamwork of the pack and sometimes sneaking up on prey alone, but they certainly won’t pass up a feast of dead carrion when available. Some coyotes have learned how to cleverly eat human food or left over garbage.

Because of its size, speed, and ferociousness, the coyote only has a few natural predators in the wild. Wolves, bears, cougars, alligators, and other large predators have been known to prey on them, but the coyote is rarely their first choice of prey. It’s easier for predators to opportunistically pick off a young, aging, or wounded coyote than an adult one.

More commonly, these animals face stiff competition from bears, wolves, and big cats for space and food. They can easily be muscled out of prime hunting locations by dint of their smaller size compared with the largest apex predators. This is not helped by the fact that the diet of coyotes and wolves often converge.

Like all species, these animals are affected by human activity. Hunting is probably the most potent threat to the coyotes’ survival. According to National Geographic, humans kill approximately 400,000 coyotes a year. Many of these deaths occur as a result of retaliation following a coyote attack on livestock such as sheep and cattle. These animals are also commonly hunted for sport or fur.

The coyote’s breeding season usually lasts for a short period of time between January and March of every year. Males and females may pair up for several years at a time, though not always for life. The female is only in heat for a few days of the year, so they have a short span of time to produce offspring.

After carrying her pups for approximately two months, the female will give birth to about six pups on average within the confines of the den. The maximum litter size is an astounding 19 pups. Because the young are born small, blind, and almost completely helpless, both parents play a role in feeding and carrying for the children, though the mother is responsible for most nursing duties. It takes slightly more than a month to fully wean the pups, after which they are fed regurgitated food by the parents.

The young coyotes will achieve full independence from their parents around six to nine months of life. Males will often wander off to find their own fortune, but females will remain with the pack for much longer, sometimes helping to raise and feed the subsequent young. These animals reach their full size and sexual maturity within their first year. The typical coyote can live up to 10 years in the wild and 18 or 20 years in captivity. Hunting, disease, and car accidents are common killers of the coyote.

According to the IUCN Red List, which tracks the conservation status of many known animals, the coyote is a species of least concern. Despite the number of coyotes hunted and killed every year, population numbers are actually increasing throughout most of their natural range. This is because these animals have adapted extraordinarily well to human civilization. The depletion of local wolf, bear, and cougar number may have also helped boost coyote numbers. However, the exact population numbers are not fully estimated.

Coyotes in the Zoo

The coyote is a very common sight in American zoos. The Minnesota Zoo contains a coyote den along its Minnesota Trail. The Akron Zoo showcases coyotes in the Grizzly Ridge near the red wolves and grizzly bears. And the Jacksonville Zoo has coyotes at the Wild Florida exhibit. Coyotes are also found at the Cameron Park Zoo in Waco, Texas, and the Buttonwood Park Zoo in New Bedford, Massachusetts.

What is a coyote?

The coyote is a type of medium-sized wild canine. The appearance and tracks of the coyote and wolf are similar, but you should tell the coyote apart by the smaller size.

To communicate with other animals, coyotes make barks, growls, yelps, howls, and similar sounds. It can be difficult to distinguish a coyote from a wolf, but the coyote will typically emit a shorter, high-pitched howl, sometimes broken up with yipping and barking noises.

How fast can a coyote run?

The coyote can run at approximately 40 MPH. By comparison, this is about the same speed as a racehorse. It can also leap an astounding 13 feet in the air.

How dangerous is a coyote?

Coyote attacks are exceedingly rare. Only a few human fatalities have ever been documented. However, as coyotes lose their fear of humans, both positive and negative encounters may become more common. They are also known to attack and kill small cats and dogs, so it is a good idea to discourage interactions by chasing coyotes away and keeping food beyond their reach.

How big is a coyote?

The coyote is about as large as a medium-sized dog.